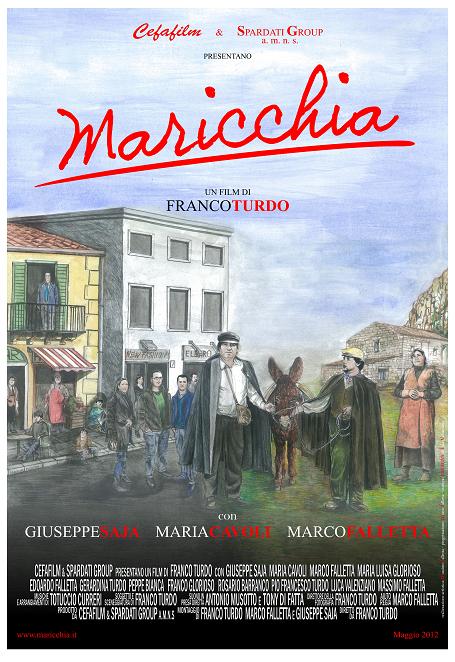 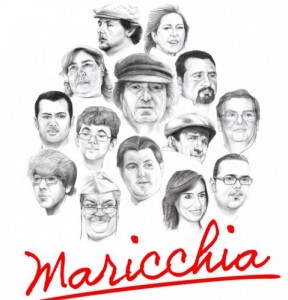 It is not often that an entire village – rather an entire region – pulls together to fulfill a life-long dream of a single individual.   But in the region of Palermo, specifically the villages of the Madonie Mountains and the town of Cefalù, people from all classes of life worked together to create a monumental full-length feature film, created by Sicilian film-maker, Franco Turdo.  Turdo, who has been a film-maker for over 30 years, realized Maricchia, his finest achievement, in the spring of 2012.

Maricchia, a tragic comedy, encompasses all aspects of Sicilian culture, above-all its dialog spoken solely in Sicilian dialect.  From the panorama of the Sicilian countryside, the decorative garments of Sicilian folk-dress to traditional Sicilian music composed for the film, all 80 minutes of this visual pleaser will leave you wanting to hop on the next plane to Palermo.

The story of the film centers around a Sicilian farmer (Guiseppe Saja) who is in search of his donkey, named “Maricchia”.  The farmer is forced to face the adversities of the modern world, from which he has been removed whilst living in the isolated country-side in his rustic and simple stone home.   These modern adversities both overwhelm and enthuse him at the same time.   Through a series of events, the scenes he faces leave us longing for the nostalgia for the simple life of the past, rather than the opulent, hedonistic and superficial times of modern-day.

What makes the production of this film so extraordinary is that is was fully created, filmed, produced and distributed at zero cost to Turdo.

Turdo hand-wrote the script in early January on a series of well-worn notebook pages; though the ideas for this movie had been circulating in his head for years.  He discussed his vision, as most Sicilian men do, at an outdoor table at his favorite coffee-bar in Piazza Garibaldi in Cefalù.  From the details of his plan, local citizens gained enthusiasm to help him promote his film and the Sicilian heritage for which they hold great nostalgia.

None of actors in the film were paid; in fact, most had never acted before shooting the film, Maricchia.  Local villagers were eager to share their shops, restaurants and country-homes for on-location filming.  When costumes were needed, the Sicilian women raided their closets (or their husbands’ or fathers’) for the perfect cape, shoes or other props designed to enhance the scene.  The ever-important music was written and performed by local musician, Totuccio Curreri, royalty-free for Turdo’s project.

Filming was completed in less than one month.  In his cinematography, Turdo captured the stunning natural beauty of the towns of Cefalù and Lascari, and the bucolic charm of the mountain villages of San Mauro, Petralia, Pollina, Polizzi and Motta.  It is these images that resonate in my mind, and which make me long to return immediately to the place I love most in the world.

A perfectionist, Turdo had in his mind exactly the visual outcome of every scene, even prior to arriving on location.  In fact, he shot one particular scene over 60 times when an actor had to toss a piece of bread onto the ground.   As he placed the camera at street-level, he wanted to the piece of bread to bounce a certain number of times, stop directly in front of the lens and land “crust top-up” in close-up view.   Take after take, he made the actors toss the bread until the scene was perfect.   He placed this clip on youtube – time after time – to show the stamina and determination needed to be a top-notch film-maker.

Turdo was not only the writer, director, cameraman and producer of Maricchia; he also was the sound and film editor.   This arduous process took Turdo over two months to perfect the film to his liking.    Turdo demonstrated to me his process of editing the clips and adding sound effects and background music at his studio in Cefalù.   From my technology professor perspective, I was stunned at the hardware he used – an 8 year-old desktop PC that was running Windows XP.   It certainly is not how it is done in Hollywood, but the outcome is certainly Hollywood-quality.

When it came to production, advertising and distribution of the film, all aspects of these marketing tasks were donated by local businesses and citizens.   Posters and print media were designed by a young graphic artist,  a printing company donated the posters for advertising in towns and newspapers and the region’s cinema-owners proudly screened Maricchia to their townsfolk, always with theaters sold-out to full-capacity for the eager crowd ready to show their pride in the Sicilian culture and support their local celebrity, Franco Turdo.