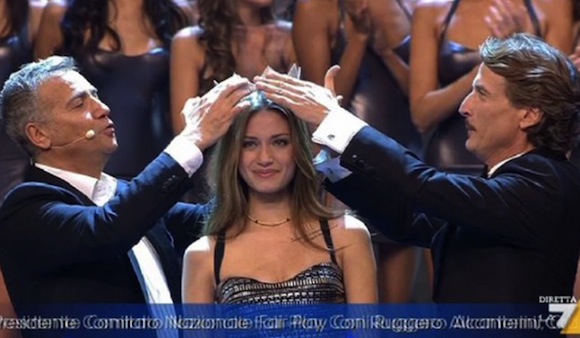 There is a saying in Sicily that goes “Donna baffuta sempre piaciuta” which was obviously invented by a man and roughly translated means that if a woman had a hairy top upper lip she was more attractive to the opposite sex.

Nowadays, beauty contests are scoffed at and a lot of women strongly protest when the annual Miss Italia contest rears its head. Even RAI, the state tv, decided not to televise it this year but the event went ahead and was snapped up by one of the private channels. A selection of beautiful girls from all over the country, who definitely did not have hairy top upper lips, paraded in front of a panel of judges. Aspiring to that modelling contract and the possibility of earning megabucks advertising beauty products, the girls danced a little, spoke even less and allowed themselves to be scrutinized by judges and the public who all voted their preference.

Once again, the winner was a Sicilian girl. Giulia Arena, who is 19 years old and comes from Messina was acclaimed the Most Beautiful Girl in Italy. She has an original Dante quotation tattooed on her chest. Coming second place was also another Sicilian girl, Fabiola Speziale from Agrigento. For the second year running the judges preferred Sicilians over all the other contestants.

But that’s nothing new as beautiful Sicilian women have been in the news since Claudia Cardinale made her debut. Of Sicilian origin she lived in Tunisia and was voted “the most beautiful Italian woman in Tunisia” in 1957. Her prize was a trip to Venice to the Italian film festival. She is still a staunch supporter of the Miss Italia beauty contest.

In fact local girls here have been winning Miss Italia beauty contests since 1954 (10 times), so we are expecting many more bellissime ragazze siciliane to be up on those catwalks in the future showing off their genes to the world.

But the question is……..in our day and age do we still need beauty contests to decide about someone’s physical aspect, declare a winner and then see them sink into oblivion shortly afterwards if they don’t meet and marry a footballer. Is this something that young girls today still aspire to?
Something sad behind it all?