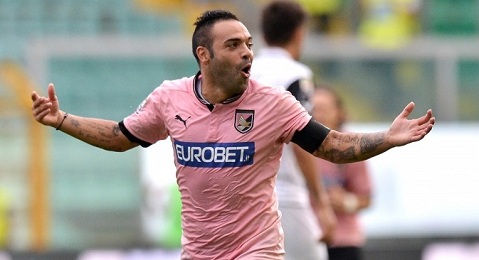 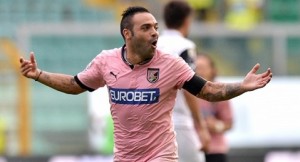 As has happened so many times in the past, sometimes the only way for Palermo to get a crucial victory is with a little bit of Fabrizio Miccoli. What transpired on Sunday afternoon was one man putting the team on his back and willing a struggling side to victory through pure grit and determination. It was a game that will surely go down as one of the more memorable individual performances in club history and the 12,000 or so lucky enough to have witnessed it in person will never forget.

Palermo came into the match in dead last with only one point from five games and one goal to show for it. Already on its second coach and with Perinetti’s pending resignation, the club was in disarray. To make things even more frustrating, Miccoli had been kept on the bench over the past few games despite a sputtering attack. Gasperini had been coy in his press conference leading up to the match, stating that Miccoli would only start when he was 100% healthy, mentally and physically. Whether the comments eluded to some problem within the organization or not, Miccoli was given the starting spot and he proceeded to emphatically underline why he should never be kept out of the lineup, barring a pregame double amputation.

Not much more can be said about Miccoli’s performance. He did it all. More importantly, Palermo got their first league win since April 1st and climbed out of the relegation zone. Make no mistake, if the club wants to succeed this season, it will need its captain at the helm first and foremost. Credit to Gasperini for finally giving him the start but even playing him in a position that suited him the best: leading the line as a center forward.

Beyond Miccoli, there were some other positives to be taken from the match. Brienza’s return was good for the attack. Ciccio provides so much dynamism to a side that had been so static in previous matches. It’s a shame that he was sent off for a farcical second yellow – the hand ball seemed very unintentional, especially considering he had his back to the ball. Hopefully, his absence against Genoa won’t hurt too greatly.

Has anyone noticed Ezequiel Munoz? If not, that could very well be a good thing. The fact of the matter is, the Argentine has put in several nice performances this year. He finally is maturing to the point where he may no longer be a defensive liability. Granted, the Chievo attack was nothing to write home about, but the improvements are visible. Let’s hope it continues.

Luigi Giorgi joined the club after being personally recruited by both Sannino and Perinetti. Now, with the former gone and the latter on his way out, the question was whether Giorgi would be useful anymore. A couple games into the Era of the Gasp, it looks like Giorgi has made himself into a viable option. He’s not flashy, he’s not all that technical, but he has qualities that benefit the team. Gasperini made the right move by inserting him into the midfield when Santiago Garcia was struggling going forward. Giorgi stepped in and even scored a goal while Garcia dropped to the defense and was instantly much more comfortable.