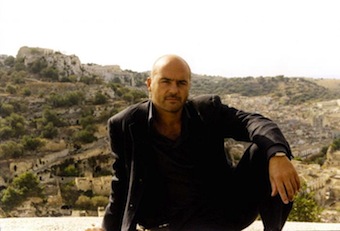 Sicily is home to some of Italy’s best known and successful writers.   To name just a few, but there are many more, Luigi Pirandello from Agrigento, won the Nobel Prize for literature in 1934.   Giovanni Verga, from Catania, was part of the Verismo (Realism) literary group in the latter part of the 1800s,  and contemporary writer Andrea Camilleri, also from the Agrigento area, is probably the best known author in the whole of Italy today.

Camilleri, up until he started writing his hugely successful crime novels featuring Salvo Montalbano as a provincial police inspector, was a theatrical director specialising in the production of Pirandello’s plays.   Today, at 87, defying all medical opinion that heavy smoking kills you, his publishers urge him to write as many Montalbano tales as possible although he says he has already written his last related crime story, 5 years ago, which is stored in his publisher’s safe with instructions to publish it when he feels he’s unable to write anymore or, more likely, has got fed up with his character.

His books have been translated into 30 languages, the last of which was Korean. In English the award winning translator, Stephen Sartarelli, manages to brilliantly capture Camilleri’s wry and cynical Sicilian humour. In Italian the books are written with a generous sprinkling of Sicilian dialect which doesn’t seem to cause any trouble for mainland Italians. Stephen Sartarelli uses a mixture of London Cockney and some British northern dialect in his English translations which also seem to work very well. The Patience of the Spider, The Shape of Water, The Snack Thief and many more, deal with Sicily’s (and Italy in general) present social condition. Notoriously anti-Berlusconi, Camilleri deliberately wanted to make a critical commentary about his turbulent government as well as denouncing how the state deals with the mafia and how the church has an enormous influence on Italian politics.

On Italian tv a new series of another 4 of his books has become very popular. All the different series shown so far have done miracles to boost tourism to Sicily as they are all filmed in some of the most suggestive areas of the island. One of the series has also been shown on Australian tv and BBC 4 in the UK. Concentrated into the smallish triangle of Ragusa Ibla, Modica and Scicli, on the southern tip of the island, and also Punta Secca (Marina di Ragusa) where Inspector Montalbano’s house is – right on the beach! – these are all UNESCO world heritage sites because of the Sicilian Baroque architecture to be found here.

But this area is not just famous for it’s architecture. Modica boasts a curious laboratory where they still make chocolate from the original Aztech recipe brought by the Spanish during their domination of the island in the 16th century. Visits can be made to watch how it’s made and taste their produce. The chili flavoured one seems to be the most popular, as well as the orange and lemon ones, but there are many other flavours too. 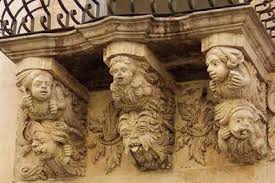 Just walking through Scicli looking up at the wrought iron balconies and their sculpted supports of cherubs, griffins, shiplike figureheads and rearing horses are enough to attract any keen photographer’s eye. Nearby Noto, reconstructed after an earthquake in 1990, is the most famous town for the splendid Sicilian baroque architecture.

Naturally in the television series there is never a rainy day. Only sun-drenched streets and parched countryside and Montalbano who often starts the programme off with his early morning swim in the calm, blue sea in front of his house. All of which conjure up idyllic summer holidays.

Another important part of Camilleri’s character is his love of food which is more than his love of women even. All the popular Sicilian dishes appear at least once or twice during the programme: live octopus, arancini, pasta con le sarde, fresh grilled fish, sardines al beccafico all washed down with a good Sicilian wine and Montalbano’s grunts of ecstasy whilst eating it. At the end of the programme you are wishing you had something more interesting than that mouldy bit of cheese sitting alone in the fridge.

Searching for the restaurants where Montalbano eats his freshly caught fish has also boosted the restaurant/trattoria trade in the area, especially those beach ones with the flappy curtains and golden sand all around. Some of the best beaches on the island can be found in the area of Marina di Ragusa. 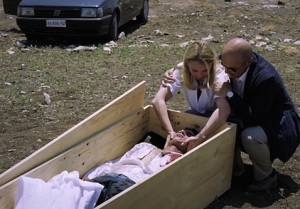 His last book Una Lama di Luce (A Flash of Light) deals with clandestine immigration onto the island (a real life problem these days) and Montalbano’s proverbial impatience with his superiors and authority in general. Full of the usual wit, quirky characters and vivid pictures of desperate life on this island, it also portrays Montalbano not so much as the hard-nut policeman that he tries to be, but reflects his weaknesses and fragility attached to human nature. Different stories are intertwined ending with the usual dramatic turn of events making it yet another brilliant novel to be read in one sitting.