The Mount Pellegrino Climb in Honor of Santa Rosalia 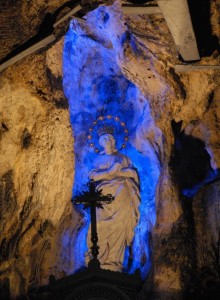 In Palermo the month of September is dedicated to Santa Rosalia, the patron Saint of the city. Since the year 1624 when the Saint saved Palermo from the terrible plague, the people of Palermo have venerated the “Santuzza” who outranked the former patrons Saint Cristina, Saint Oliva, Saint Ninfa and Saint Agata.

Beside the traditional “Festino” that takes place in July, Palermo celebrates Santa Rosalia on the 4th of September which according to tradition is the date of the Saint’s death (in 1160). From that day and during the entire month of September, many devotees climb the ancient road leading to Mount Pellegrino. This mountain, which holds a particular attachment for the inhabitants, overlooks Palermo and can be viewed in all its stupendous beauty, from every part of the city. During his visit to Sicily, Goethe defined Monte Pellegrino as the most beautiful promontory of the world.

On the night between the 3rd and the 4th of September and in the days that follow, Mount Pellegrino becomes a pilgrimage destination for devotees of Santa Rosalia. Hundreds of people gather at the foot of the mountain to begin the traditional “acchianata di Monte Pellegrino”, which is the climbing of the mountain by the ancient road. The road is tortuous, five kilometers long and reaches the Sanctuary built above the cave, where Rosalia their beloved hermit lived and prayed.

The journey is long and arduous. People of all ages participate in the “acchianata“, either as an ancestral tradition or often to ask for and give thanks for grace received. It is very impressive to see devoted people barefoot and sometimes even walking on their knees.

A stream of people crowd along the Scala Vecchia (the old stairway) and proceed at their own pace. Motivation gives them an invisible strength to reach their coveted destination. Once the pilgrims reach the Sanctuary, a triumphal path of candles and lights greets them,  inviting them towards the blessed spring to have a sip of spiritually refreshing water, the same spring from which Santa Rosalia had drunk.

The church bell rings announcing the beginning of the Mass in which everyone participates. After the Mass, since we’re in Palermo, it is a tradition to eat a delicious “panino con le panelle“, a sandwich generously filled with chickpea fritters which is a typical street food favorite. After this refreshment and moment of conviviality, it is time to descend the mountain. The way back is less strenuous and tiring perhaps because of the gratification given by visiting the place where Santa Rosalia lived, prayed and died. 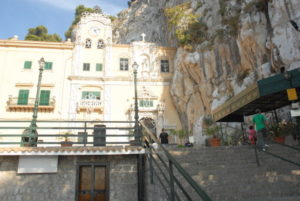 How to get there:

From Palermo, the most convenient means to reach the Sanctuary or the starting point of the “acchianata” is the Amat bus N° 812. For the month of September there will be buses leaving every 20 minutes from Piazza Don Luigi Sturzo with various stops within the city. For those climbing the mountain on foot, the ancient pathway starts with a dramatic entrance at the corner where Via Imperatore Federico, Via della Favorita and Via Anwar Sadat meet.