MUMMIES.. and Daddies and others.. in Palermo’s Catacombs 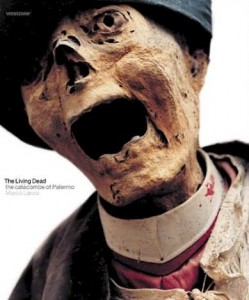 A visit to Palermo’s Catacombs is certainly not for the squeamish but it is one of those ‘not to miss’ places if you are visiting Palermo, simply because there are not many cemeteries in the world nowadays where you actually get to meet the dead inmates.

No tv documentary or article can ever re-create the real atmosphere of actually visiting these dungeons in person. They are to be found in the Capuchin Crypt not far from the Royal Palace.

Your experience starts as you pay the entry fee and one of the ancient Franciscan friars (part of the Capuchin Order) shouts “No Photos. Be Silent” as you descend the tunnel into the dungeons. Another friar tags along behind just to make sure you don’t actually take any photos as otherwise who is going to buy all those postcards upstairs?

At the bottom there are about 8000 corpses waiting for you to pay your respects to. Admittedly some of them do look a bit under the weather but then they have been hanging around there for about 400 years. But others still retain some remarkable facial features, even having their original skin pulled nice and taut so they look as though they could have had a nip and tuck job.

The first person to be placed here after his death was Brother Silvestro da Gubbio in 1599, one of the original Capuchin monks. As the embalming processes improved, the wealthy families in Palermo thought it would be a good idea to be interred here after death……at a price. It became a sort of status symbol to have a member of your family here and it was also a form of income for the upkeep of the cemetery. Certain days were allocated to the family for visiting the deceased so they could come here to pray and hold hands with their relative, allowing him or her to ‘join’ in.

At first glance it seems difficult to distinguish any order in which these bodies are hooked up to the walls but there is in actual fact a strict order of social status and gender. First there are the original monks. The men’s section contains professors, doctors, soldiers and other important people all dressed in their Sunday best.

Interestingly, in the women’s section there is an area dedicated to the ‘virgins’ who for some reason were placed lying down with a metal band round their head. Again all of them are dressed elegantly. The children’s section is the most poignant with the famous ‘rocking chair’ children. It is also alleged that Velazquez, the Spanish painter was entombed here too.

At the end of the tour through the crypt there is the most famous exhibit which was added in 1920, although the last friar buried there was in 1871.

This is the perfectly embalmed body of Rosalia Lombardo who was just 2 years old when she died. Thanks to the secret chemical embalming process she looks like a peacefully sleeping child with a slightly damp forehead. A sad and touching sight.

Nowadays, the big problem is that there is never enough money for the upkeep of the crypt. Luckily, the dry cool atmosphere helps with the preservation but it has been said that the corpses need to be better protected by placing glass walls down the corridors to avoid people touching them (!) and proper lighting.

So if you want to still see them in their original state before they go hi-tech, come as soon as possible.

Maybe this is one of those places to add to your ‘before I die list’?