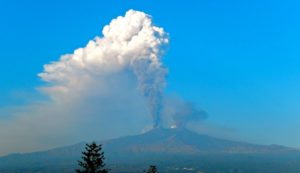 A little background information about the composition.

Mount Etna, the highest volcano in Europe, dominating the East coast of Sicily from its mighty 3,400 meters, is referred to simply as ‘The Mountain’ by its closer co-islanders, the Eastern Sicilian people.

The choice of writing in ‘Modern Sicilian’ has a rationale (and hopefully consequences) which may take us into a never-ending debate. I will briefly say that this humble orthographic experiment, a work-in-progress, is born out of simple questions like: are Sicilians a people in danger of extinction? No-way! Why then, should Sicilian be a language in danger of extinction? The Times of Sicily, is among those platforms who admirably rubber-stamp the importance of cherishing Sicilian heritage in all its forms.  This short work is an attempt to describe the condition of people from an ancient land through the condition of its Mountain. The attempt is undertaken by juxtaposing Sicilian and English. The deployment of English was thought helpful for reasons related to the accessibility of the text.

The musicality of Sicilian is noticeable in the alliteration of the sounds [ija] and of the sounds [s], [r], [t],[k] [y] among others. The rhetorical effects of these particular sounds are exactly the same in the Arabic language. I can safely say that this is known by many, appreciated by fewer, and unknown by many others.

Starting a sentence with ‘and’ is not seen as good in terms of style whether in Italian or in English. In Sicilian, this choice bestows a particular sense of solemnity and continuity. In line 5, ‘and’(e), was rendered both in English and in Italian as ‘yet’ (eppure).

Some peculiarities of Sicilian are definitely ‘lost in translation’. To begin with there is the fact that the Mountain is feminine. An English version having ‘she’ was attempted, but was found to give the reader an excessively syncopated experience. However, Italian was not, maybe unexpectedly, in a position of clear advantage with respect to English when it came to the translation of terms such as ‘arrikrijari-si’ (line21), ‘ginijusu’ (line 5). These two terms required rather lengthy translations in the two target languages. In the same fashion, some idiomatic constructions were lost, like the proverb “Kkiù skur’i menzannotti non po fari!”(Lit. it can’t get any darker than midnight!). So was the polysemanticity and polymorphy of the verb ‘yittari’ (Lit. to throw). The charming riddle-like nature of Sicilian (and of Sicilians?), rich with double-entendre, and linguistic ruses, will maybe not be enjoyed to the full by non-native ears. For clarity’s sake, the sound [x] in scaxuni, is pronounced as [sh] in shy.

Last but not least, the name, (‘Saqallija’), which is simply the Arabic for ‘Sicily’. If no other region in Italy has a specific term for itself in the Arabic language, there must be a reason, and that reason is to be found in the history of Sicily, a history that none but her, the Mountain, has witnessed in its entirety, and who keeps reminding us of the fact by means of ‘scorching lava’. Thanks to the spread of information and to platforms like the Times of Sicily, the enduring and striking call of most ancient Sicilian is not being left unanswered anymore.

(The Mountain, a parodic phenomenon, it’s taking the piss out of us.)

(It quakes, it shakes, it grumbles, and we act indifferent. It keeps on laying there, as if by chance…)

(Yet, we act indifferent. Were it not for her, even our cherries wouldn’t be as genuine, as inviting, as tasty, and for us, it is just peanuts.)

(It does not need us to water or feed her, but if we do not respect her, it will pronounce its verdict.)

(It strives to tell us that we are a power, but also that without her… No olives on our table!)

(All the people should literally pay in order to admire our wealth.)

(It casts scorching hot lava from that mouth, but it is cold inside our souls, this is the real issue.)

(Couldn’t get any worse than this! A good excuse to mind our own business.)

(Who knows if I will manage to live long enough to witness Sicily nurturing the minds that today, flee without too many ifs and buts.)

(Wake me up that day, when looking upon Sicily we will recall (‘Saqallia’).)

(And that’s when I will feel a satiating thrill of pleasure, reinvigorating, as if I were born again.)

(For now, we keep sweeping dust away – we are good at that. The mountain, a seismic phenomenon.)

Andrea Musumeci
Linguist, audio-visual translator, freelance EN-IT translator and interpreter, Andrea Musumeci has completed his MA Translation at Middlesex University and is currently focusing on developing his MA thesis on Optimality in Translation Studies in his forthcoming doctoral studies. His research interests include the preservation of the Sicilian linguistic heritage.