Music That Feeds the Soul: A Review of Michéal Castaldo’s Olive You 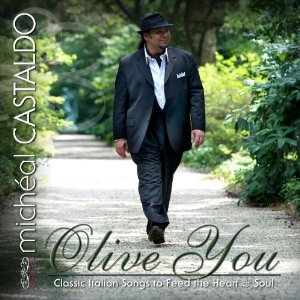 Great music appeals to an innate quality resounding within the human psyche.  It reflects poetic form capable of moving the soul and making us feel, yet so few artists are capable of generating creative works worthy of producing such wonderment.   Only the most talented of artists endowed with distinct, rare gifts provide us with such splendor, and without fail, Michéal Castaldo, the highly acclaimed classical cross-over tenor and recording artist, reflects this caliber of artistry.

Castaldo, an award winning songwriter, producer, and singer born in the Calabria region of Italy was raised in Toronto, Canada, and now resides in NYC.  In addition to his music, Castaldo celebrates Italian culture by producing and importing olive oil grown on his family’s 20,000 orchards located in Calabria.

With the release of his fourth album, a CD titled Olive You- Classic Italian Songs to Feed the Heart and Soul, the title’s clever play on words highlights one of Castaldo’s primary interests while also delivering to listeners a superb collection of twelve songs predominantly sung in Italian.  However, deviations do exist throughout the disc with Castaldo singing in Sicilian on the CD’s initial track “Parla Più Piano” followed by his intermittent and sporadic incorporation of English in myriad works as well as Spanish on one track “En Aranjuez Con Tu Amour.”  Exerting significant control over the production of the album, Castaldo’s handpicked selections are delivered in a rich, deep voice underscored by beautiful melodies and musical arrangements that are elegant, romantic, powerful, and intoxicating.

Among the twelve songs chosen by Castaldo, newly remastered tracks include:

In addition, there is the Vivaldi remix of “Questo e Amore.”

On this CD, the epitome of excellence can best be experienced while listening to the disc’s second track “Pray’R” which reached the number one spot on Amazon.com’s MP3 chart for classical songs and also claimed the top spot in the Classical Chart of Hot New Releases.  Adding to these most impressive achievements, Castaldo himself received esteemed acclaim by being named Top Indie Artist of 2011 per the UK website Classical-Crossover.

For anyone who has experienced his music, this should come as no surprise.  Castaldo’s music possesses a tranquilizing effect that resonates within the soul of the listener through the power of his magnificent voice, which evokes tears for those harboring a love affair with music.

Michéal Castaldo delivering lush Mediterranean sounds and possessing a profound gift for storytelling generates heartwarming, touching music.  Clearly, Michéal Castaldo is an Italian romantic.  He is emphatically a voice of Italy who does, in fact,  feed the heart and soul of the listener.

Kelli Scarpaci Reynolds
Kelli is National Board Certified in English language arts and holds a master’s degree in English language instruction along with school administration. Her secondary teaching endorsements include English, French, ESL, and history. Formerly, Kelli taught secondary English, served as department chair and mentor to new teachers, and was named teacher of the year. Currently, she oversees 6th-12th English language arts’ instruction at a district-level capacity, develops curriculum and assessment pieces, and provides professional development to teachers.