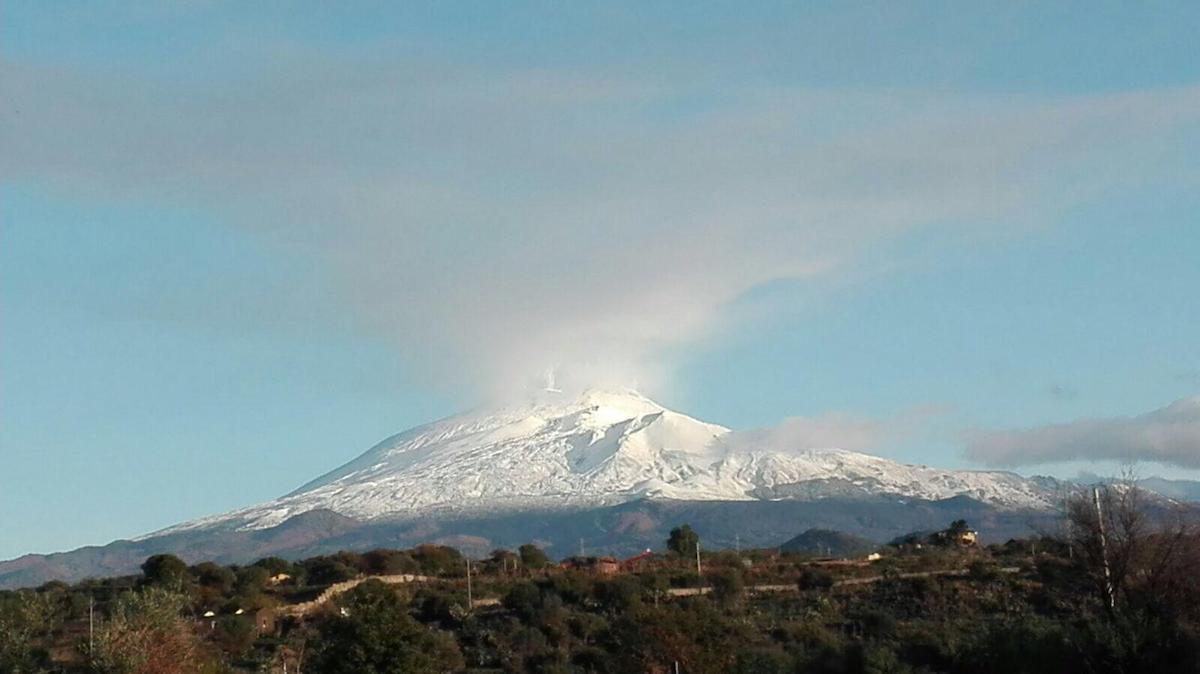 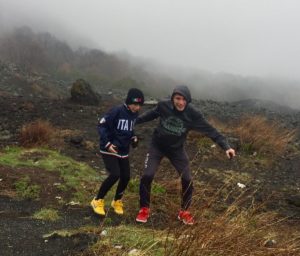 Recently, I enjoyed a Sicilian sojourn with my wife Adele, youngest son Jon, his wife Adrienne, and their two sons Petey and Brock. Landing in the Land of Lampedusa, we decided to start our Sicilian safari by paying respects to the active volcano, Mount Etna. Skiing that terrorizing inferno stubbornly stood out on my bucket list. I’d successfully accomplished the first item on my agenda by actually running with the hard-hitting bulls in Pamplona, Spain. That episode took place a quarter century ago. Now, I faced the burden of the accumulation of calendar pages. This skiing adventure seemed even more challenging. Still, my son Jon insisted that we scout the legendary mount.

As our tired auto gasped its way toward Mount Etna’s peak, a familiar New York weather pattern reintroduced itself to our vacationing family. Suddenly, we sat trapped inside a gloomy cloud. Snow fell all around us. Crammed in the vehicle, with its heater howling, our exhaled breath appeared as we craned our necks giraffe style outside the car’s windows. Only days before, we glowed when April made its the flowery debut at home in Florida. Here in Sicily, just 48 hours later, an impromptu blinding snow and ominously dark sky on Mount Etna confronted us.

The snow transformed into sleet. Encircled by layers of grayish lava, our 15 year-old Grandson Petey gingerly stepped out of the car to snatch a sliver of volcanic stone for his school report. A howling wind slammed him back. Simultaneously, a hair-raising shriek from inside the vehicle ordered, “Forget that danged big boulder. Get back into this car!” The boy is nicknamed “Lightening” for good reason. In the blink of an eye, he dived back into the coughing car. Retreat time rudely arrived. We needed to drive back down the intimidating lava built walls and bullying mountain.

We all squinted, desperately hoping to see through our frost blanketed windshield. Our moaning and complaining car still continued its skyward crawl. Leaning out of our slightly opened doors, we stretched our necks once again to see more clearly. We scoured the mountain for a broader area to turn around. Finally, we successfully u-turned and our car skated downward on a snaky road as wide as my home’s driveway. I felt trapped inside a Rick Steve travel video. I hoped our drama would prove as successful as that wandering guru. Desperate, I even called for the spirit of Sir Edmund Hillary of Mount Everest fame to help.

My prayers were answered. Through the gaps in the snow, a colossal building resembling an Alpine Austrian ski lodge gradually emerged. The sign announced, Ristorante and Pizza. I foolishly shouted, “Yeah!” at the sight of the sign. Embarrassed, my face displayed a trace of ripe tomato coloring. Skating on the icy pavement encouraged our striding as if walking on eggs. The front door appeared strangled by a rope similar to those used to tie down ships during a hurricane. Obviously, the twine stifled the door’s movement. We entered. Soon after, we untied the knot. An unrestrained gust rudely slammed the front door shut.
Entering the Baronial dining hall, our eyes were agape. We stood mesmerized as we tip-toed into the palatial dining area. Greeted by a Sicilian gentleman named Vito who smiled from ear-to-ear, he welcomed his weary travelers in his native tongue. We all stared at each other while internally celebrating our sanctuary. Had we stumbled into Shangri La?

Sheltered from snow, sleet, and swirling winds bullying us just moments ago we’d entered a protective palace, halfway to heaven. The muscular fireplace flaunted its force. Merely an indoor football field’s distance away from us, it proved jaw dropping. Our host gradually escorted us toward its picturesque, warming, and comforting flames.
Fortunately, we’d entered a quasi empty ristorante. Resting and safe, near the breathless backdrop of the volcano proved awesome. Vito spoke in a precise Sicilian dialect and he understood me. Two years ago, a Sicilian university professor amused by my chat said, “Do you realize that your dialect is over a hundred years old?” Indeed, the seasoned dialect became my first language taught by my parents to their American son. Century old or not, we communicated quite well.

High up in the cold clouds, we devoured Sicilian food fit for royalty at La Nuova Quercia Restaurant. Seated at a banquet sized table, our food fest began. Pyramids of tasty dishes appeared. We dipped fresh bread into small platters of olive oil, munched on lentils, chick peas (yes, I can pronounce ciciri), sausage, and eggplant. Grilled steak sat in front of me next to mouth watering salmon, and delicious veal cutlet. We enjoyed green salads, and my order of tomato salad sprawled out in a plate resembling a gondola. Our taste buds feasted.

My wife experienced an “aha” moment licking her lips after sampling the orange marmalade. Vito chuckled. Two hours later, on our way out to our car, Chef Maria scrambled out of the kitchen with a huge travel portion of her marmalade made from her home grown orange tree. Vito wished us God speed and assured us of snow free roads down the mountain. The first portion of our Sicilian sojourn and search for roots ended with respect for Etna’s muscle, gracious hosts, a food fest for kings, and safe roads