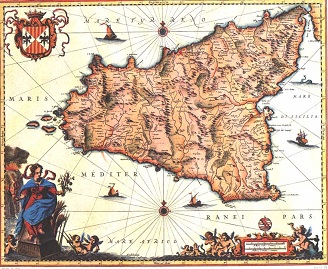 After Promoting a Cycling Competition and While Securing a Theatre Production, Roberto Ragone Gets Cultural Foundation to Sponsor Historical Novel about Sicily

(New York, NY) In the past, Italian arts and letters relied on the patronage of such prominent bankers as the Medici. Their future survival, however, might depend on entrepreneurs and consultants like Roberto Ragone, who use target marketing and online initiatives to build what he calls “cultural capital” within the Italian American community.

On the heels of successful one-month fundraiser that netted the capital necessary to produce the West Coast premiere of Chiara Montalto’s one-woman play A Brooklyn Love Story, Ragone has launched an Indiegogo campaign to publish Trinàcria: A Tale of Bourbon Sicily. Like Giuseppe Tomasi di Lampedusa’s The Leopard, this historical novel chronicles the destruction of the Kingdom of the Two Sicilies during the Italian Revolution. Ragone’s sponsor for this book is the Italian Cultural Foundation at Casa Belvedere.

“All roads lead to Sicily via Staten Island,” Ragone said. “Trinàcria challenges people of Southern Italian descent throughout the world to follow the common thread leading them back to their land of origin.” Ragone’s center of operations may be local, but this project is truly international, thanks to a fortuitous chain of events linking a Sicilian American writer, a Canadian publisher, and a London cultural guide and travel reporter.

Author Anthony Di Renzo had managed to place the novel with Guernica Editions, an independent press in Toronto, Ontario. Forty American publishing houses, Ragone explained, had rejected the manuscript “because it did not cater to commercial stereotypes about Sicily.” One editor remarked: “Nobody cares about Sicilian marchesas, unless they’ve written a cook book.”
Guernica Edition’s interest, however, soon proved “a mixed blessing.” The good news was that Guernica was intrigued by the storyline and characters in Di Renzo’s novel. Dedicated to shattering stereotypes and promoting new works of global literature, Guernica considered Trinàcria “a timely book,” particularly after the international controversy surrounding the 150th anniversary of the Risorgimento. The bad news was that Guernica’s government funding does not extend to non-Canadian authors. “Publisher and author,” Ragone stated, “were obviously in a bind.”

In steps Debra Santangelo, director of Sicilian Connections, an organization promoting Sicilian culture and commerce. Having lived in Sicily herself, Santangelo is originally from England, her home and business still based there. Santangelo recommended Di Renzo contact Ragone, an arts and business consultant known for his proven track record. Ragone jumped at the chance. “Guernica,” he said, “has a stellar reputation for bringing engaging books to the public consciousness with Italian themes we too often do not see.”

Ragone and Di Renzo considered several organizations to sponsor the novel. “Casa Belvedere emerged as our first choice because of its mission,” Ragone explained: “to preserve and promote an appreciation of Italian language, arts, literature, history, fashion, cuisine, and commerce.’ It was a perfect fit.”

“We absolutely embrace this initiative,” added Calvelli, Casa Belvedere’s executive director. “While the proof of Italy’s rich heritage is aplenty, Casa Belvedere is actively working on building upon the Italian cultural landscape by formally sponsoring an arts project. Once the restoration of the mansion is complete, we look forward to providing a venue for Italian and Italian American artists to showcase their work.”

The book’s author calls this partnership “a stroke of fate, la forza del destino.” “I am grateful for Casa Belvedere’s support and hope my novel will contribute to its success,” said Di Renzo, associate professor of writing and Italian American history at Ithaca College. “By uncovering buried stories about our collective past, the foundation is positioning itself to play a unique role among Italian American organizations.”

Di Renzo’s novel also digs up the past. Its title derives from the ancient Greek name for Sicily. Trinàcria refers to the island’s triangular shape and the three-legged gorgon on its regional flag. It is also the nickname of the novel’s narrator and protagonist, Zita Valanguerra Spinelli (1794-1882), Marchesa of Scalea, whose turbulent life mirrors Sicily’s rocky transition from feudalism to capitalism.

The story begins when a Hollywood film crew invades Palermo to shoot an epic about the Italian Revolution. Researching the past, the director visits the city’s Capuchin catacombs. Preserved in the crypt among over eight thousand mummies is Marchesa Spinelli. Dead for eighty years, she remains haunted with memories, and her spirit recalls her complicated relationships with her scientist father; a British wine merchant, whom the Marchesa failed to marry; her patriotic and rebellious granddaughter; and Giacomo Leopardi, the doomed Romantic poet.

Sicilian Connections would be among the first organizations to donate money towards the campaign. “Knowing Anthony’s writing and Roberto’s energy,” said Debra Santangelo, “I wanted to tangibly express my support for this project.” Ragone returned the compliment: “From her Sicilian Connections blog and other enterprises, you can discern Debra’s instinct for and commitment to cultural entrepreneurship.”

The same might be said of Ragone. Earlier this year, he collaborated with the prestigious strategic consulting firm of Connelly McLaughlin & Woloz to enhance the reputation of Gran Fondo New York, an Italian style cycling competition. Ragone enlisted Italian organizations to submit letters of support and attend a press conference asking the City of New York to expand the presence of the competition and tap into the potential cultural and economic benefits. Gran Fondo New York showcases a popular Italian custom and attracts the high spending power of committed cyclists, their guests, and other fans.

“I only take on projects that I believe in and can connect to,” said Ragone. “I immerse myself in their goals and objectives. That includes grass-roots efforts to advance dignified portrayals of the Italian experience. That’s what I mean by building cultural capital.” If Italophiles and the descendants of Italian immigrants don’t bring Italian art, music, and literature into the marketplace, this glorious heritage, Ragone believes, will be confined–sometimes by design, sometimes by sheer luck–to museums, libraries, and classrooms.

“And that’s not enough!” Ragone maintains. “A living tradition requires contemporary venues. I want to turn the internet into a Neapolitan coffeehouse a high-octane exchange of art and ideas mediated through personal and professional networks. That’s exactly what happened in the late-18th and early-19th centuries, and it made possible both Italian Romanticism and the Italian Revolution.” The great Neapolitan philosopher and historian Giambattista Vico would have called this a ricorso, the return of an old idea in a new context that fundamentally reshapes an existing culture. This philosophy informed Ragone’s work on past projects such as Gran Fondo New York, A Brooklyn Love Story productions, and now Trinàcria.

Ragone, whose professional motto is “Transforming Vision to Value,” is managing Trinàcria’s online fund-raising campaign. He intends to raise the necessary funds to cover the book’s editing, design, printing, promotion, and distribution. Based on their giving level, the site bestows donors with an aristocratic rank from the Kingdom of the Two Sicilies (e.g. Baron/Baroness, Count/Countess, Prince/Princess, King/Queen). Each title offers its own gifts and privileges, from bookmarks, calendars, and posters to formal acknowledgment in the printed novel and an invitation to its official book launch.

This book campaign will run until December 13, 2012. The campaign raised over $3,200 in less than a month and has already been written about in various periodicals and blogs. All future royalties will benefit the Italian Cultural Foundation at Casa Belverede.