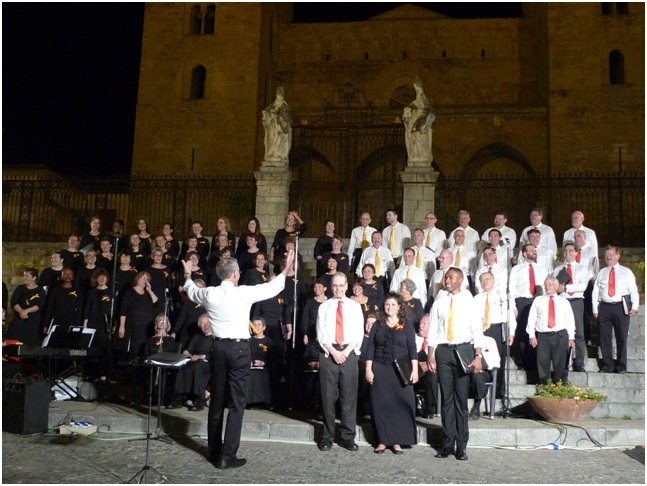 For quite some time the Pro-Loco (local tourist office) and I had been organising the arrival of the New York Choral Society in Sant’Ambrogio, Sicily where they were going on tour at the end of June. Karen, who is also part of the choir and with a Sicilian family background too, had contacted me about 18 months ago with a view to setting up something in the village. As I was taking Karen around the area, we came up with the idea of holding a party. What we didn’t know then was that Italy would be playing in the semi-final of the European Cup on the same day! 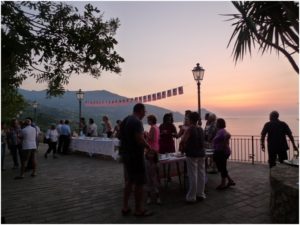 The villagers set about bedecking the village with plants and flags. All along the one main street that winds through the village various households brought out tables and their fine linen tablecloths and each family prepared something different to serve up to the American guests. That way they could walk through the village tasting things from all the tables.
The actual choir numbered just over 70 people. With their friends and family members and somebody who introduced herself as a groupie (but not of the 60s kind, she said!!) there were around 123 altogether.

The only access road was closed off where the coaches could drop them off and then it was a short walk into the village and the belvedere with that ‘to die for’ view over towards the Rock of Cefalù.
A little bit further on in the village square, chairs had been placed around it and just off to the side a huge widescreen had been rigged. In case anyone had forgotten, tonight was the semi-final of the European Football Cup and although not everyone would be glued to the screen, it was there just in case! As it turned out Italy won the match so there was a bit of excitement among the local lads which spread through the party guests too making things even more fun.
The needlework ladies had laid out on display their delicate hand embroidered sheets, towels and tablecloths which are becoming a rarity today as the young generation of girls prefer technology to sewing so not many of them really want to follow that tradition anymore. Such a shame as nothing in this village is made in China ……… yet!

A few speeches were made in the square and then the serious business of making music started. The local minstrels played Sicilian music with songs on their instruments and got everyone to join in. Then to say thank you to the village, the NYC choir sang to them too.
Everybody went home with big smiles on their faces and a bag full of magic memories of village life to take back to the city with them.
But, of course, things didn’t finish there…………………………………………..! The next night the Choir was performing in the magnificent cathedral square in Cefalù. 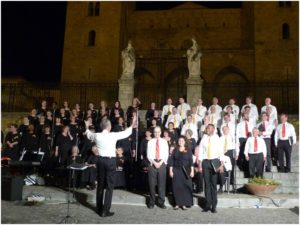 The evening was balmy warm with a gentle breeze to keep everyone cool. The choir placed themselves on the steps up to the cathedral so all of us could see every single singer without having to strain our necks. The town’s dignitaries were all there: the Mayor, various councillors and the choir’s travel agent who did the translating for the public.
We were treated to pieces by Puccini, Vivaldi, an American composer and, of course, a finale of one of Verdi’s rousing choruses: Va Pensiero from Nabucco.

The Mayor thanked the choir for coming, especially as they didn’t even ask for one cent from the town hall coffers! I was also thanked in public for all my organisational abilities and afterwards a small cocktail party was held for the singers.
They were continuing their tour of Sicily on to Montalbano Elicona in the province of Messina and then to Catania where they would be performing in the Teatro Bellini there.
At the end of the week-long tour, the choir held a last night gala dinner in Catania to which they kindly invited me. We spent a lovely evening, not only together, but also being entertained by a local theatrical company called Sikilia – http://www.compagniasikilia.com/il_gruppo.html – who put on a show for us in Sicilian dialect recounting in words and music some of the deep-rooted customs and traditions of the island which the audience found fascinating.

Once again, I was very moved by the warmth displayed by the members of the choir, not only towards me but to the villagers of Sant’Ambrogio too. They presented me with a terracotta plate to take back to the village together with a very generous donation to put in our kitty. Lots of them had written personal notes to me in which they asked me to convey their thanks to the people of Sant’Ambrogio. They also said that the party was the highlight of their trip!
We just hope that they will remember this visit to Sicily as a genuine Sicilian experience, away from the usual tourist traps, where they came into contact with our ‘no frills attached’ village life, hospitality and, of course, the good food and homemade wine renowned worldwide!

Carmelina Ricciardellohttp://www.sicilianexperience.com
I’ve decided the best way to help the Sicily I love is to promote it to people who want to live life as a Sicilian local. My name is Carmelina Ricciardello. I was born in Sicily and emigrated to Australia when I was 7 years old. In 1992, twenty eight years later, I returned to my homeland for a short visit and have been here ever since. It was in Sicily that I felt the sense of belonging I had never experienced in Australia where I grew up. Sicily was in me and now I am in Sicily enjoying its beauty, joys and difficulties. Sicily has little of the glamour of Tuscany, and Umbria but it has its own unique character born out of the hardship and brutality that characterised much of its history. I had an obsession to tell the world about its unpretentious beauty and relatively untainted village life. Not to turn it into yet another popular tourist destination but to provide an opportunity for keen travellers to taste the simple life of a Sicilian villager.