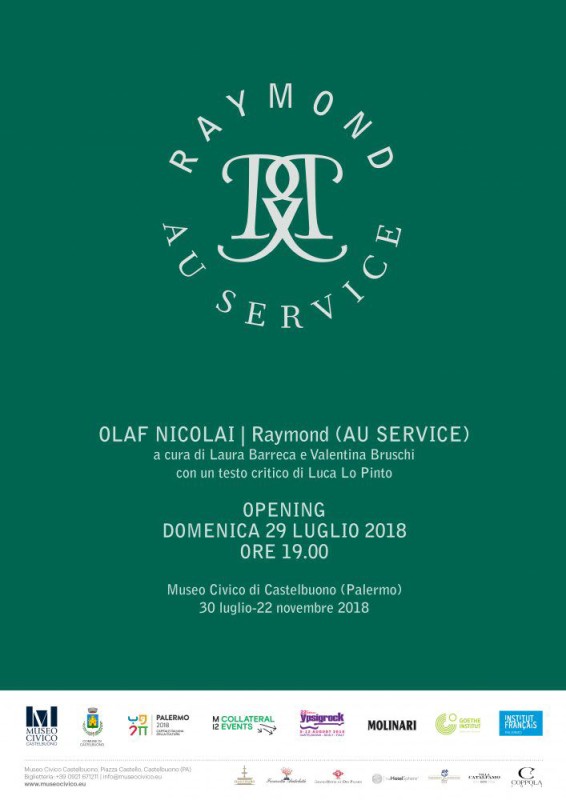 A project curated by Laura Barreca and Valentina Bruschi

with a critical essay by Luca Lo Pinto

Olaf Nicolai has conceived a site-specific work for the Ventimiglia Castle, which includes the exhibition of two large white soap sculptures, created thanks to the collaboration with the Casa Museo del Sapone, Sciacca. The walls of the exhibition space are painted green, with the writing AU SERVICE and with the representation of a graphic-symbol conceived by the artist.

The presence of soap is related to the obsession of Raymond Roussell for hygiene: it is said that he consumed a lot, and that he never used the same soap twice. The project is related to the intervention Olaf Nicolai has created for the Grand Hotel et Des Palmes (within the Raymond project, curated by Luca Trevisani in collaboration with Olaf Nicolai himself, generator of this exhibition): small courtesy soaps currently distributed randomly, and only in some rooms of the historic hotel in Palermo.

The idea of working around Roussell’s obsession is tentative to explore a personal unease. As Luca Lo Pinto writes – author of the text-manifesto published on the poster distributed in the exhibition and curator of Olaf Nicolai’s soloshow, There Is No Place Before Arrival, Kunsthalle Wien (July 13 – October 7, 2018): “Over the past twenty-five years Olaf Nicolai has produced conceptual works that are both complex and poetic. Experimenting with a wide range of means, his artistic practice constantly questions the way we look at things, prompting us to reflect on the ways in which the link between meaning and experience takes shape. He is an artist who considers the relationship between work and spectator as a dynamic process. An integral aspect of his methodological approach is the way he confronts the context in which he is working. This is confirmed by the installation conceived for the Museo Civico di Castelbuono inspired by the figure and by the thought of Raymond Roussel, around which the artist had already produced two works “.

On the occasion of the 23rd edition of the Ypsigrock Festival, continuing the experimental spirit in combing visual arts and music, once again, the front of the Ventimiglia Castle will be animated by an artist’s films: during the evenings of the Festival concerts (10-12 August) a selection of video works by Olaf Nicolai will be projected onto the façade of the Castle to make the experience between contemporary art and music in Castelbuono even more evocative and special.

During the period of the exhibition, the Museum will host a series of talks, conversations and screenings to study the figure of Raymond Roussel, involving artists, scholars, journalists in order to deepen the knowledge of one of the most interesting and generative personalities in the cultural history of the XX century.

The project is a collateral event of Manifesta 12 – European Biennial of Contemporary Art and is part of the official calendar of Palermo Capitale della Cultura 2018.

Olaf Nicolai (1962, Halle an der Saale, Germany, lives and works in Berlin) after having studied German Literature and Philology in Leipzig he started his artistic career in 1990 and today he is professor of sculpture and bases of the three-dimensional design at the Academy of Fine Arts in Munich. In 2015 he created, Giro, a performance installation lasting seven months on the roof of the German Pavilion at the 56th Venice Biennale. He participated in last year’s documenta 14 with a radio piece titled, In the Woods There is a Bird, which won the Karl Sczuka Prize for Audio Drama in 2017. In 2013 Nicolai designed a textile curtain for the lecture hall at the Kunsthalle Bielefeld and this summer an articulated project titled, Chant d‘Amour, where he references Philip Johnson’s architecture for the same Kunsthalle. A extraordinary coincidence of exhibitions this year gives a complete and in-depth look at the complex creative imagery of the artist in important European institutions: the project at the Kunsthalle Bielefeld (until September 9) is in parallel with other two solo shows dedicated to the artist, at the Kunstmuseum St. Gallen (until November 11) and at the Kunsthalle Vienna (There is No Place before Arrival, until October 7), together with the special projects, Carillon, for the Museion in Bolzano (until September 30) and the one for the Museo Civico Castelbuono. The work of Olaf Nicolai has been exhibited in many solo and group show, in addition to those already mentioned, also documenta X (1997) and 49. and 51. Venice Biennale (2001 and 2005). His work has received various awards and scholarships, including Villa Massimo, Rome (1998) and Villa Aurora, Los Angeles (2007). Many of his works are found in private and public collections, such as the Museum of Modern Art, New York and Friedrich Christian Flick Collection, Berlin.

Luca Lo Pinto is curator at the Kunsthalle Vienna and co-founder of NERO magazine and publishing house.

We wish to thank Alessandro Mazzotta director and founder of the Casa Museo del Sapone, Sciacca for the precious collaboration for Olaf Nicolai’s project, www.casamuseodelsapone.it

We also thank the Tipografia C.P.R. by Luca Ciccia and Coppola 1971 for the precious collaboration.

Tickets: full € 5,00; reduced € 3,00 (adults over 65 and youngsters 8 to 18 years old, schools and groups of over 12 people, Touring Club members and other agreements; € 2.00 residents and people born in Castelbuono; free for children up to 7 years of age, differently abled and their caregivers, teachers and tourist guides accompanying groups, students of the Faculties of Art and Architecture, ICOM members, accredited journalists.