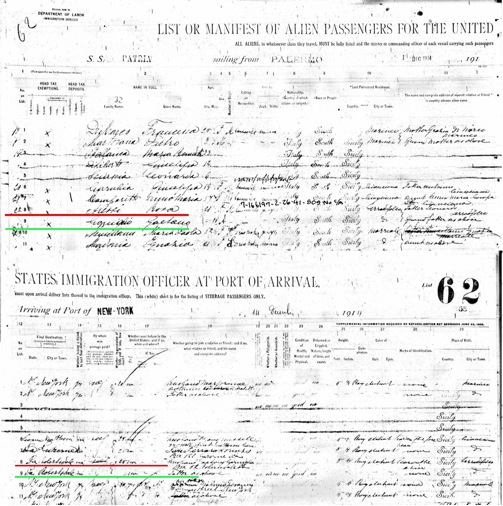 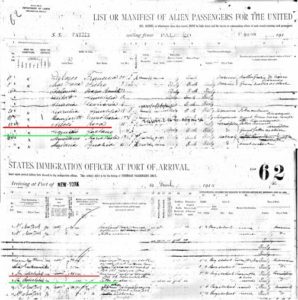 Last time, I discussed how to find images of immigrants’ passenger manifests, for arrivals at Ellis Island, on the free site www.ellisisland.org. Manifest images can also be found in other ways, on other sites, and for other ports of entry, all of which I’ll discuss later. First, I’ll go over what you may see on a Sicilian immigrant’s ship passenger manifest for arrivals at Ellis Island from 1892 through 1924.

Once a manifest is found, a variety of information may be seen on it, depending on the years of immigration, the port of departure, arrival point, etc. In addition to the name of the ship, the port and date of departure, and the port and date of arrival, early manifests (1890’s) may give only the person’s name, gender and age. Some manifests show such information for passengers, as well as crew members. Other lists may show names of passengers who have been “detained” for a variety of reasons.

Later manifests give more information. Starting in 1907, the following data columns, and more, are listed: Family Name; Given Name; Age (Yrs. and Mos.); Sex; Married or Single; Calling or Occupation; Nationality; Race or People; Country and Town of last permanent residence; “Name and complete address of closest relative or friend in country whence alien came”; Final Destination (State, City or Town); and “Whether going to join a relative or friend, and if so, what relative or friend, and his name and complete address.” Remember that female immigrants from Sicily used their birth names, first and last, whether they were married or single. For example, my mother’s manifest gave her name as Rosa Alessi, and her son’s (my brother’s) name as Gaetano Coniglio. Don’t be thrown off if you see, on the same manifest, that a mother’s surname and the surname of her child are not the same.

If the columns noted above are completely filled in, much can be learned. If you know the ancestor’s occupation in America, finding the same occupation listed in the manifest strengthens the case that this is the same person. Under “Name and complete address of closest relative or friend in country whence alien came”, the “address” that is given may be simply the town name, but usually under this heading the relationship of the person left behind is given. Much may be gleaned from this.

For example, if it said “father” you would therefore have found, if you didn’t already know it, the name of the passenger’s father. Remember, according to traditional naming conventions, a Sicilian man’s father’s name would be given to his first son, so if you know the immigrant’s oldest son’s name, and it matches the name given on the manifest as his father’s, you have a strong correlation. Similarly, if the immigrant is a woman, her second son’s name would probably be the same as her father’s.

The “closest relative” named may be the immigrant’s mother: if her surname is different than that of a male immigrant, it’s her maiden name, another piece of information that might extend or corroborate existing knowledge. The names of a male ancestor’s eldest daughter could also be reflected in the first name of his mother. Or the name of the “closest relative” left behind may be that of a brother or sister, an in-law, or a spouse. In any case, it provides additional information about the passenger. Note that if it was a spouse, unless a couple each happened to have the same surname at birth, the surnames of the couple would be different.

Obviously, the column headed “Whether going to join a relative or friend . . .” can also provide very valuable information. If the person was going to a spouse, and you already know the spouse’s name, a match is pretty strong evidence that immigrant is the person you’re looking for. Additionally, if a destination address is given, that may also match information from a Census, or give you a clue helpful in researching a particular locality for more information about the person. It also may add a “missing link” as to where an ancestor may have lived prior to any known places.

In addition to the columns detailed above, manifests after June 1907 also specifically give, in the last column, the immigrant’s place of birth. This was usually, but not always, the same as the “last residence”. Other information of interest about your ancestor can include: whether literate; the amount of cash carried; whether ever in the US previously, and when; condition of health; color of eyes, hair and complexion; height; and identifying marks. There are even notations for “Whether a Polygamist” and “Whether an Anarchist”. I’m sure all anarchists declared themselves!