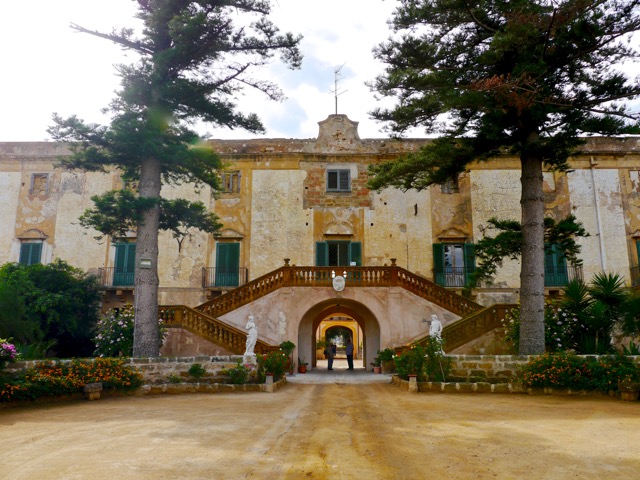 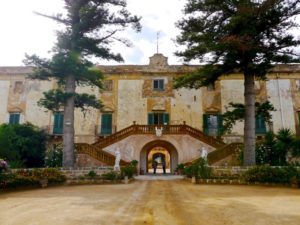 In June of this past year, the doors to an incredible history were opened to the public for the first time at Villa Isidoro da Cordova. Originally built in 1648 and apparently named for the convent of St. Isidore that was next door, it has been lived in continuously until 2011, with the death of the last resident, the Marchioness Maria Teresa De Cordova. Situated on land that was part of the Barony of Solunto from 1392, this villa is without question unique and exceptional. It offers visitors the ability to see a place that represents not just one particular historical period, but as reflected in its structure, decorated rooms, and treasure trove of contents, an evolution of time and history.

Nestled between Bagheria and Aspra, just 14 kilometers outside of Palermo, this area had been the summer retreat for the Palermitani nobility in the 17th and 18th centuries. Under the Spanish rule of the time, the society was markedly divided between the rich, who in many cases had been gifted land and title, and the struggling poor. The short move to the fertile east, cooled by sea breezes, and much less crowded, afforded the wealthy the opportunity to enjoy themselves and their elevated status, in good company. 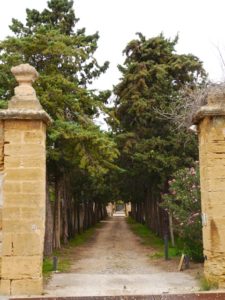 There are, sadly few remaining of these beautiful Baroque-styled villas. Some are still in private hands and some have fallen into disrepair. A handful is open to the public today. Among them, Villa Isidoro is perhaps the most spectacular for its good condition and its breadth of contents, spanning some 350 years. The original property included a huge swath of land. A tree-lined driveway spanned all the way to the sea, so long that a stopping point was erected where carriages could be met by a servant and a picnic lunch. A climb to the top offered expansive and lovely views. Visible upon reaching the main gate to the villa, a monumental staircase with two sides and surrounding gardens, unfolded before their eyes.

The resident families, including Del Castillo, De Cordova, Mastrilli and Paterno, were all related by this or that marriage, and their family crests or coats of arms can be spotted in the ornately decorated ‘trompe l’oeil’ ceilings of the main entertaining rooms, which greet the visitor upon entering. Over the years, and in 1753 and 1849, in particular, the families made additions and renovations to the estate. It is a maze of connecting rooms, from the east wing to the west, decorated in gilt wood, marble, mirrors and ceramics, with high ceilings, ornate stucco moldings, and huge doors opening to terraces and views. The walls are covered with family portraits and photos, including the family tree. Floral paintings in the Dutch and French rococo style, by artists such as Jusepe de Ribera, and Pietro Novelli, cover the door transoms and panels. The remaining wall coverings and frescoes echo the spirit of the grandeur of the environment. 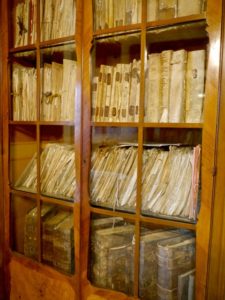 Framed documents and archives from various periods can be seen in the library and the Hall of Arms. A fabulous array of coins, cameras, books, toys, and stationery items that span the years, are intermingled for all to see. Having been occupied until not long ago, the private rooms and their furnishings reflect an early 20th century feel. Personal items on display include adult and baby clothing from long ago to vintage styles, hats, luggage and gloves, all in a wonderful state of preservation. The villa, now museum, has a full display of items and much more in its stored collection.

Originally built as a farm, Villa Isidoro specialized in the production of the lemons and olives for which the area is famous, and grapes and peaches as well. Farming continued for well over 300 years and the produce was sold in Europe. An olive press was constructed to produce olive oil in the early 1800s. In 2011 the villa was given over to an entrepreneur, Domenico Angileri, who promised to transform it into a museum and cultural center and prepare it for the future. Today there is ongoing research and effort to restore the property, the gardens, the orchards, olive press and outer buildings to the beauty they once had.

To help with the enormous restoration projects and expenses, the space is often available to the public for special events. It has already held an important fashion industry show, a vintage car show with cars all along the driveway, and many concerts. I am thrilled that they catered their first lunch for a group tour, with Sicilian musicians, for a group I brought to the villa. And it was a memorable highlight of the tour.

The Villa is the most important cultural asset of Aspra. It should be on your must see list. If you are in Palermo, it is just a short ride by car, bus or train. While you are there, visit also another one time summer residence, Villa Palagonia, renowned for the wild statuary that sits atop its circular walls.