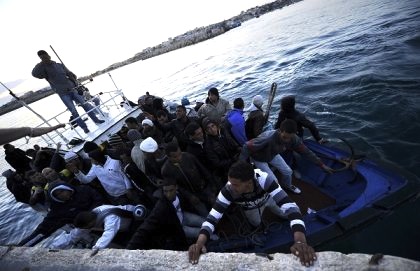 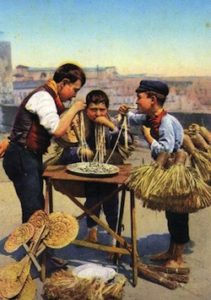 Every time I go for an espresso in Viagrande, there is this old man standing in front of the café selling his wares. Seems like I have seen this man there for years, really. He hangs around in front of the café every day with a cart-like contraption that he built at least fifty years ago.

It is made of wood and has four wheels. On top is a flat area that he displays his wares. It has two handles that he lifts and pushes when he is ready to go home. He has on display and for sale every cheap item from China imaginable; pens, lighters, tiny screw drivers to fix your glasses, cheap tools, cheap plastic children’s toys and the like. Mostly junk. Sicilian Dollar Store style junk.

Everything is on sale, however, for whatever you want to pay for it…fifty cents, seventy five cents…it doesn’t matter. I love this old man. To me, he is Sicily. He is thin and usually unshaven. His belt is far too big and a good portion of it is doubled looped through his pants. He wears a Sicilian” “coppula”…a “cappidduzzu” as my grandfather called it…on his head. A cigarette dangles from his mouth. He has an old, mountain-weathered face. He looks every bit his eighty-five years of age.

He is from the hills somewhere; probably Trecastagni, Zafferana, Sant’Alfio or any number of towns leading to Etna. Wearing that weather-beaten cap, boots worn out decades ago, woolen trousers worn summer or winter topped with suspenders and a long sleeve cotton shirt, he is a splendid sight.

The original Old Man of the Mountain. The Peddler.

The lines on his face tell of a once strong man; a farmer perhaps. The callus-covered hands tell of sweat and toil. This man has seen much, I think to myself. Now, as he approaches the end of a lifetime of labor, here he is… selling cheap Chinese imports on a wooden table in a small Sicilian town located near a volcano. I always buy a trinket or two. Sometimes I buy many. I never take the trinkets away with me. Who would? That is not why I put my money down. Not for the trinkets. Rather, for the Peddler.

I engage him in conversation. He speaks the ancient Sicilian dialect, not Italian. He speaks like my grandfather. I understand him perfectly, clearly. He tells me of the five children all grown up and married off. All on the mainland. He has a small plot of land not far away. His wife passed on years ago. All he has left is what you see on the table. This is the backside of Sicily. The side not shown on any itinerary. Look closer, and there are others.

In Sicily, this is one of the results of sixty-seven governments that have risen and fallen since the end of the Second World War. The tidal wave of money that leaves Rome always arrives in Sicily as a trickle. Abject poverty, Sicilian style.

The safety net that we have in America is not as strong in Sicily and Italy. Italy chronically is near the brink of insolvency and a result, there are many Peddlers throughout the Island. In Acireale are the Africans from Morocco and now the Tunisians and Libyans. They line the sidewalks leading to the Duomo. Their wares are displayed on blankets that are placed on the sidewalk. Cheap sunglasses mostly. Rip-off designer bags. All for a few euro. Other sell African wooden figures or pop art from Egypt painted on papaya. Others sell Moroccan rugs. Everything has a price. They live in cramped apartments in Catania…often ten or twenty to a small three room flat.

Still, to them, this is heaven. Can you imagine that? Then there are the washers. Teams of men and teens from Morocco who occupy almost every intersection of every busy street waiting for the stop light to change to red, at which point they offer to wash your windshield for fifty cents. They live in the shadows. The shadows of heaven. In Taormina are the Gypsies, begging with their infant for a coin or two. On the beaches are the Chinese offering a massage for fifteen euro…right on the spot.

The old man with the push cart, the street vendors, the window washers, the Gypsies, the Chinese…and many other people from far off and exotic lands are in Sicily for a purpose…to live. Just live. Nothing more. 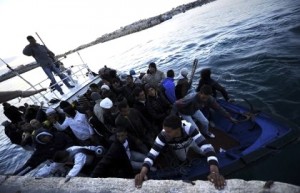 Sicilians, being who they are, understand. They too understand oppression, poverty, and those seeking to find a better life. Only when there is a sensational act of violence…not very often…do the newspapers raise a hue and cry. Mostly though, life plods on. Just as it has for centuries.

That is what Sicily has always been…a refuge of sorts…for the oppressed. Welcoming them, too. She understands.