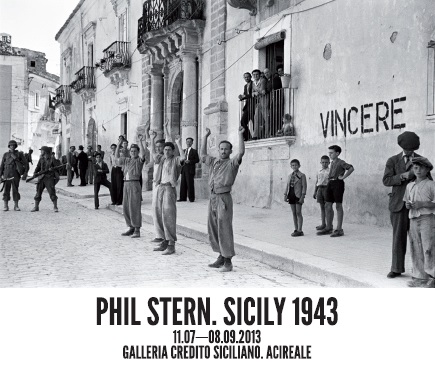 With war more popular than ever these days, it seemed a good time to take a friend up on an invite to see a photo exhibit about the Allied landing in Sicily in 1943. The photos were by American celebrity photographer Phil Stern. That’s Phil Stern, famous himself for his black-and-white shots showing celebrities as “humans” that include James Dean, Marilyn Monroe, Louis Armstrong, and Robert Redford. Frank Sinatra handpicked Stern to photograph JFK’s Inaugural. That same style of photography served Stern well in Sicily.

His war duty started a bit more ambitious. “I was 21-years-old and I believed I was invincible,” Stern said. “I wanted to go to war—to destroy Hitler.” And while he indeed played a role in doing just that, he also did much more. He captured in raw but profound photos the allied invasion—and reception—in Sicily that turned the tide of the war in Italy. And in 2013, at 93 years of age, Stern returned to Sicily for the 70th Anniversary of the landing. This grand return was filmed and now exists as a DVD, Phil Stern, Sicilia 1943, La guerra e l’anima. (The War and The Soul).

The film was featured along with the exhibit of Stern’s wartime photos at the Museo storico dello sbarco in Sicilia, (Allied Landings in Sicily Museum) located at the Le Ciminiere cultural center in Catania, walking distance from both train and bus stations. The Museum itself is a gem, nicely replicating the events that took place in Sicily from July 10 to September 8, 1943, and recreating the conditions of life at the time in Sicily as well as the reality of the war experience. According to Museum Designer, Gaspare Mannoia, “Everything we have forgotten is now conserved in this museum, which aims to protect out most precious asset: peace.”

Popular features are the outline of Sicily on an octagonal table that is animated by colored spaces projected from above while a voice narrates the events of the landing. There is also the simulation of a landing craft coming to shore, which puts you right there with the soldiers on that 1943 morning. Fun for the whole family.

My favorite part, if that’s an appropriate declaration, is the reproduction of a small Sicilian village complete with a hilly street to climb in one direction and in the other an air-raid shelter to visit and sit in that truly rocks and rolls when the bombs start falling.

Also noteworthy is the life-sized model of a bunker with shooting soldiers and the wax figures of the world’s leaders of the time, including a waxed Mussolini who seems to truly be pondering just how everything went so wrong. The museum is certainly worth a visit if you are in Catania.

Operation Husky was the first touch of Allied soldiers on Italian land. After severe Allied aerial strikes pounded Sicily, Operation Husky arrived from North Africa in the dawn’s early light on July 10th, 1943, with Generals Patton and Montgomery leading the first amphibious landing of the war, well before D-Day, with 2600 landing crafts, for a month-long battle fought among 500,000 combined Allied and Axis soldiers on Sicilian soil. It all began with the American-occupation of the southern coastal cities of Licata, Gela, and Scoglitti and the British/Canadian occupation of the east coast towns of Pachino, Marzamemi and Augusta. About 40 days later was the grand finale in Messina, finally conquered by American forces August 17. Next up on September 3rd, with the last of the Fascist hold-outs routed, a “short military armistice” was signed in Cassibile, near Syracuse, that called for the immediate, complete and unconditional surrender of Italy. Italian General Giuseppe Castellano met General Dwight Eisenhower in a tent for the signing. This tent also is replicated at the Museum.

Italian Marshal Pietro Badaglio then read his official surrender on the radio on September 8th: “The Italian Government, recognizing the impossibility of continuing the unequal struggle against the overwhelming power of the enemy, with the object of avoiding further and more grievous harm to the nation, has requested an armistice from General Eisenhower of the Anglo-American Allied forces. This request has been granted. The Italian forces will therefore cease all acts of hostility against the Anglo-American forces wherever they may be met. They will, however, oppose attack from any other quarter.” Wow. Just like that Italy was at war against Germany.

For those with an interest in seeing some of the sights where the Americans first landed and fought, the travel agency Regalpetra Viaggi (www.regalpetraviaggi.com) provides in-depth historical tours. The tours have been developed with the historical consultation of journalist-writer Ezio Costanzo. He is a key character of this article as he was also the curator of the Phil Stern photo exhibit that showed in Milan and Acireale before coming to the museum in Catania.  He also wrote the aforementioned DVD of Stern’s return to Sicily in 2013. 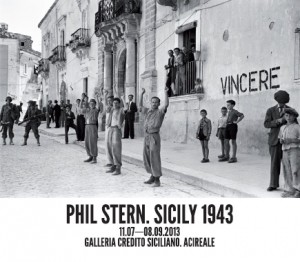 Phil Stern is a descendent of Russian Jews who came to America, the Bronx to be precise. He volunteered for war duty in 1942 and joined the ranks of the elite “Darby’s Rangers” as a combat photographer. Stern was not shy about getting in the middle of the action as an official photographer for the armed forces newspaper, Stars and Stripes. He was awarded a Purple Heart after being wounded in action in Tunisia.

Then came Sicily and and the famous stellar photographs that can and should be Googled. After the dust started settling, there arose also something of a curiosity. In the DVD, Stern recounts his stay with a Sicilian farming family, including the 15-year-old daughter, Angelina. Stern is pictured standing with the father and daughter—with his arm firmly around the young girl’s waste. Her father thought it a good idea if the American wanted to stay on with the family. Seemed Stern had a choice to make: stay with the family and with Angelina or return with his camera to America. He returned to America, but one can’t help but think when watching the DVD of his return to Sicily 70 years later that Stern had one eye on the lookout for Angelina.

The before and after of the Allied landing is Sicily is the stuff of mafia-lore, and how could it not be? This is Sicily. Ezio Costanzo re-enters our article now because he is also the author of a book now available in English as The Mafia and the Allies: Sicily 1943 and the Return of the Mafia which is only a slightly less alluring title than the original Italian, which translated would read, The Mafia and the Allies, American Secret Service and the Landing in Sicily, from Lucky Luciano to Men-of-Honor Mayors.

Luciano’s coming out of retirement, if you will, to help the US war effort and to use his contacts with Sicily’s “men of honor” to clear the island for the Allied invasion is deeply-developed in Costanzo’s work. Fascism, theoretically, had put the mafia out of business, and some like to say the U.S. put it back in power. Ok, but was having to get in bed with the mafia to beat Hitler any worse than getting into bed with the Soviet Union to beat Hitler?

The official souvenir program of the museum is less confirming of mafia involvement in the planning of the Sicilian invasion, claiming there are conflicting theories. But it does confirm what can’t be argued, after the war “the Allies favored enormous powers to some mafiosi on the island,  such as famed (at least here) Calogero Vizzini who AMGOT (Allied Military Government Occupied Territory) nominated mayor of Villaba on July 27, 1943. The legitimate power he acquired through this position gave new life to his shady activities.” I’d say he wasn’t the only one.

A Bell For Adano

English readers might also enjoy John Hersey’s 1945 Pulitzer Prize winning novel A Bell for Adano, a story of American Major Joppolo’s daily struggles to bring a devastated Sicilian village back to life, including the Major getting revitalized himself thanks to a love interest, a complicated love interest, with Tina, a local fisherman’s daughter. While a novel, Hersey’s views are playful and entertaining, from the peculiar personalities of the village to the Americans throwing candy to the children from their jeeps and tanks, but Hersey does paint an accurate picture of occupied Sicily in the days after the invasion since he saw it first-hand: as a journalist he accompanied the Allied troops of Operation Husky.

I’d love to know if Hersey and Stern had met when in Sicily. And if so then I’d wonder if there’s any connection between the fiction of Major Joppolo’s Tina and Stern’s real-life Angelina. I’d like to think so. After all, what good is war without love?

Stern didn’t see Angelina on his 2013 trip and received no information about her. But that doesn’t mean he found no closure on this trip. He was obviously overwhelmed and humbled at the affection and accolades the locals showered upon him. And if it was closure he was looking for then he seemed to have found it, as seen on the DVD,  when he stood in front of a swastika flag on display in the museum and gave it an emphatic “Auf Wiedersehen!”
[geo_mashup_map]