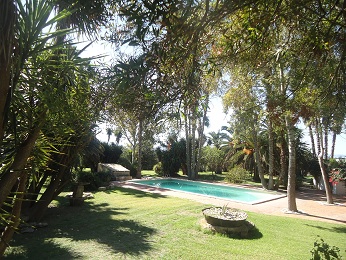 If you drive North away from Siracusa, ignore the desolate industrial landscape and continue through the old Ragusa-Catania State-road and veer then toward Lentini. In the region Biviere, is situated the prince Borghese estate, descendant from the noble Roman family, surrounded by their marvelous Mediterranean garden, well known all over the world.

The princess Donna Maria Carla, here simply called Miki, welcomes all her visitors as a perfect guide, introducing the story of her family, and the history of the site.

With a warm voice she evokes all her difficulties when in 1968, with her Prince, Don Scipione Borghese, decided to move to Palermo and then here, where everything had been forsaken and neglected  for centuries.

It was 1968, and every trace of the ancient Biviere pond was gone, drained out and dried up for malaria reasons since the 30s. Those places, now distressing, were still saturated  with history and legends. According to the myth  the Biviere pond, which used to be Lacus Erculeus, had been created by Hercules, Jupiter’s son,  as a gift to the goddess of harvesting Demeter. To do that Hercules used the skin of the invincible lion Nemeo that he killed using his bare hands. The name of the nearby town of Lentini, originally Leontini, corroborates the mythological origin of the legend.

In the Arabic era the pond is given the name Beverè (becoming later Biviere), or trough for the herds. In1392, king Martin of Aragon, with an edict gives the Lentini’s feud Biviere to a forefather of the Borghese family on the maternal side, and it was described as a luxury place ideal for fishing and hunting.

With great determination, but above all with great passion numerous experimental works were done and today the garden of the Biviere’s House can be thought of as a work of wonder: it is a lush Mediterranean garden with a full floral atmosphere where in elegant promiscuity live autochthonous and exotic plants.

A dedicated woman, Donna Maria Carla, studied botanic, read specialized books and  did experiments, and now she can explain the origin of every tree, plant and flower with great love as they were her own creation.

The places around the pond, St. Andrew Chapel, the old hunter’s inn, are so well complemented amongst themselves and covered by almost anthropomorphic plants almost dancing around you.

In a couple hours you will know the secrets of the garden of the princess, loosing yourselves among Yucca plants, lush palms, elegant Jacaranda, very fragrant roses, agave and aloe that almost look as a Renaissance sculptures and more than that.

Walking in front of the house with an apricot color, from the Chapel, through an ancient arch, made of lava stone, Donna Maria Carla will take to her kingdom by a soft slope at the end of which is the swimming pool area, a true relief during our summers, where more rare plants, as gentle creatures, will protect you with their delicate shades from the blazing ray of the Sicilian sun.

Simply promenading through this place truly unique you can live moments of peacefully harmony. By booking in advance you could enjoy a tea or even a dinner in an informal and elegant atmosphere.

Today the Garden is the destination of numerous visitors from all over the world. The Borghese Garden, is the only garden in Sicily as the member of the  Italian Greatest Gardens Association and has many visitors , especially from Great Britain since the Queen Mother visited it in 1988.

Lucia Iaconohttp://evainsicily-siculasugnu.blogspot.it/
In the farthest part of southern Europe, I was born on St. Lucia's Day in Siracusa, Sicily, and have resided here since 1994. Primarily, I work as an official tour guide in the provinces of Siracusa and Ragusa. I adore my job and fell in love with it a long time ago while embarking on a private, guided tour of Greece. I was charmed by the tour guide's way of describing his world with simplicity, passion, and politeness while communicating his love for Greece to us. Although I realize I do not know everything about my country, I approach life with an endless curiosity as the basic ingredient in everything I do. Through my job experience, I continue to learn how to look at and describe my people, culture, and environment. I aim to do this with the same sense of wonder and curiosity that I think Eve demonstrated when she started to explore the world. I embark with my tourists and feel the initial level of passion and surprise on every tour as if it is a first-time experience, which is amazing.