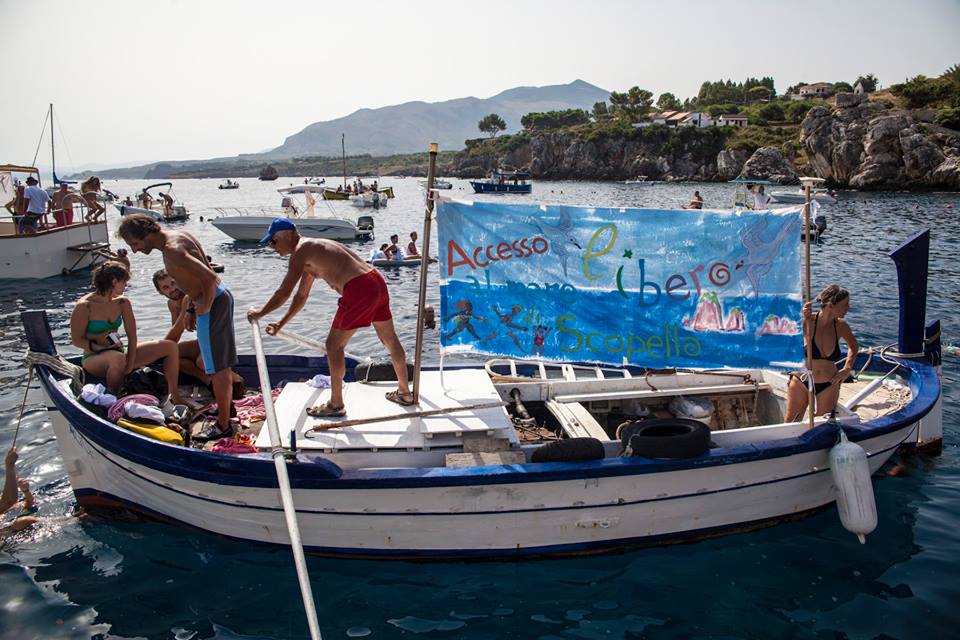 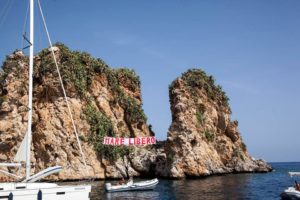 The freedom-loving people of Castellammare del Golfo took to the sea Sunday morning, September 6, to protest the lack of access to those who want to swim in the sea in Scopello. It’s a bit of a complicated situation, as I understand it, which is why I find it interesting. It goes way back to over 100 years ago, I think, to had the right to the land around the historic tuna fishery (tonnara) and the portion of the beach that is Scopello—the rocky beach (no sand) where you find the famous faraglioni, those majestic rocks jutting out of the water. Based on that ancient situation, someone eight years ago decided they where in a position to profit from it, and they now charge everyone three-and-a-half euros to enter what had been free forever.

For my money, three-and-a-half euros, if it includes a lounge chair and constantly clean restrooms, is a good deal—assuming I want to use a lounge chair or go to a public restroom. But what if I just want to walk down to the rocky slabs and jump in for a swim? Still three-and-a half euros. But what if I just want to walk down and take a picture of the faraglioni? More than three-and-a-half-euros. Much more, a local photagrapher told me. The privateers, the protesters explained to me, are claiming to have a copyright on nature. I have no idea what would happen if someone were caught painting the scenery. 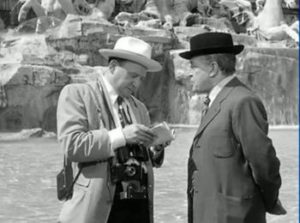 That’s my understanding of the complex situation. It reminds me of the famous Toto  (Italian comedic actor) movie where he gets the idea to charge people who are taking pictures at Rome’s Fountain of Trevi. When a shrewd American businessman sees Toto cashing-in on tourists who want their photos taken, Toto, even shrewder, claims to own the Fountain of Trevi and for a ton of American dollars sells it to the shrewd but clueless American!

In this modern world of a globally-interconnected economy where G8 (or 7?) nations take over waters filled with fish off the coast of Africa and make it illegal for the local Africans to fish there and then get surprised when starving Africans show up on G8 (or 7?) nation shores, I guess the idea of the open seas not being open for everybody really isn’t news. But, still, in Sicily, where tourism is the economic savior, when a family of four who paid only 29-euro per person to fly Ryan Air from northern Europe now gets hit with a 14-euro charge (parking extra) to go swimming at a beach the tourism board highly advertises to attract tourists, it just doesn’t sit well. And for the locals, including Palermo families who come for a Sunday after working all week (if lucky enough to have work) and after paying taxes to the Region of Sicily, for them to be asked to cough up money to go swimming, it just doesn’t sit well—especially for local Sicilians who up to 2007 never paid a penny for this right. And other Sicilian beaches such as the one at Petrosino and the famous Scala dei Turchi are facing similar issues, thus making this an important cultural confrontation. 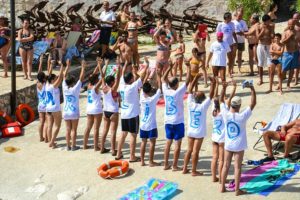 A few weeks ago Coordinamento Mare Libero did a sit-in at the entrance to the area, at the exact point where people pay, which generated ample publicity for the cause. One of the protesters told me, “Only in Italy do you have to protest for what is already the law.” Well, Italy and Kentucky, I thought to myself. But for now what’s important is that this attack by land needed to be followed by an attack by sea!

A brilliant idea because, the sea in this scenario is actually still free, it’s just that the right to dive into it from Scopello has now been privatized. Please understand, it’s not an anti-capitalist protest. No one is saying they can’t charge for the lounge chair usage. There are many privatized lidos on Sicilian beaches, but anybody can walk past them to take a swim. That’s the issue here. The privateers have blocked access to the sea. 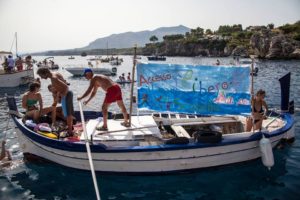 o….on a hot, humid, but blessedly partly cloudy morning, boats en masse arrived at the faraglioni as they do every day for a beautiful swim. But there was a difference this time. First off, there were noticeably more boats than normal, and secondly, the boats were waving banners demanding free access to the sea. Boat captains with bullhorns were barking their claims and chanting in unison, “Mare Libero!” (Free the Sea). And the masterpiece of all was the sight of two young Castellammarese rock-climbers scaling the faraglioni to unfurl a huge banner reading “Mare Libero” , that could be clearly read by those on the three-and-a-half-euro a person beach—including the proprietors. Well done! 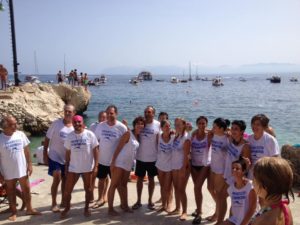 And then 50 or more people—including the Mayor— jumped from 20 or more boats to swim to the Scopello shore to take over the beach and chant some more, all wearing tee-shirts reading, “Privatizza Staminchia!” In America we would say “Privatize This!” with the “this” understood, although it may come with a vulgar hand gesture to supplement. But these tee-shirts decided not to leave anything to chance, so I’ll just clue you in that the saying “Privatizza Staminchia” is complete with the meaning of the hand-gesture directly incorporated in the phrase.

Now I know what you’re thinking: a  protest that is made up of a bunch of Sicilians swimming in the Tyrrehenian Sea does not quite carry the same heroic image of Martin Luther King leading his followers over the bridge at Selma. But it is the same level of peaceful protest on an important and, yes, complex issue. But no matter what side you land on, I think the Reverend would have been proud of Sunday’s civil, in fact downright friendly act of civil disobedience. Danilo Dolci, too.

The result of all this only time will tell, but I’m confident the freedom-loving people of Castellammare del Golfo will not give up the fight.