The Pulsing Heart of Palermo: The Historic Vucciria Market 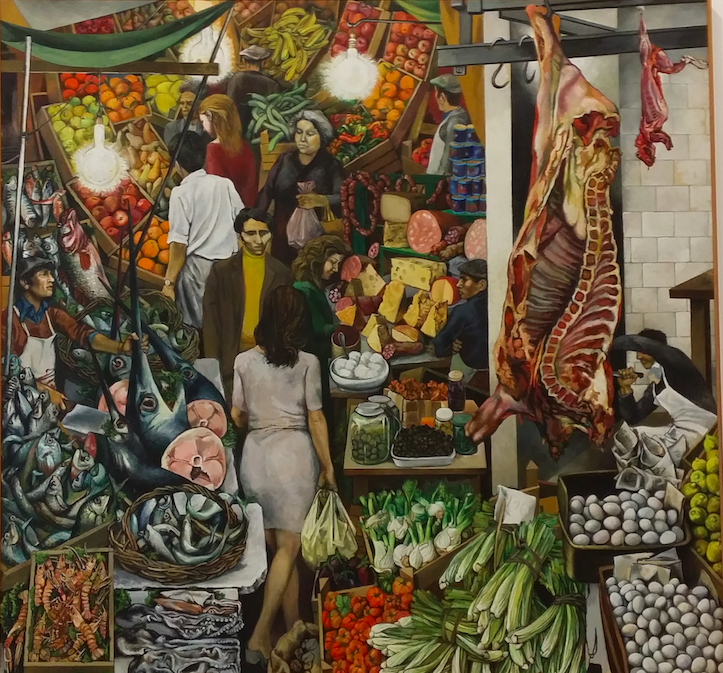 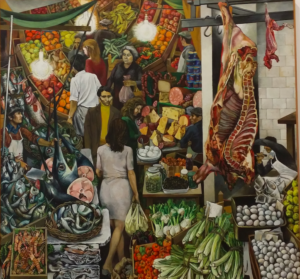 What inspired Renato Guttuso, famous Sicilian artist, to dedicate a painting, in 1974, to the Vuccirìa market? The “Vuccirìa di Palermo” is the title of the painting that soon became one of his most famous works and an emblem of Sicily.

The Vuccirìa is one of the four most popular historic markets of Palermo together with Ballarò, ù Capo and Borgo Vecchio. These markets still maintain most of their original aspect although time and modernization have inevitably marked them. A visit to these markets fully immerses you in the spirit of the city and is a not-to-miss experience, far from the usual tourist attractions.

Located in the central area between Via Roma and Corso Vittorio Emanuele the buildings surrounding the marketplace show evidence of Second World War bombing. Unluckily the negligence of the local administration has done little to avoid the relentless deterioration of the area; this however doesn’t affect the people’s attachment to the place.

The term Vuccirìa derives from the French word boucherie, or butcher shop, dating back to the 13th century Angevin domination of Sicily and it denotes the origins. Thereafter the market became well-known for its fresh fish and fruit. 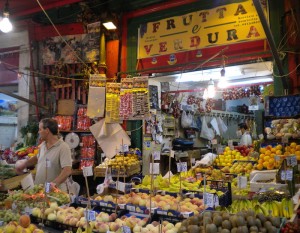 uccirìa also means noise, confusion, chaos and the term well describes the atmosphere that dwells along the streets of the market. It’s fascinating to hear vendors shouting out to sell their goods, trying to overwhelm each others’ voices. It seems a bit odd when these vendors speak to you directly with the best of their smiles inviting you to buy something. It makes you feel part of it all and this happens commonly in Sicily.

The fruits and vegetables, well arranged on the stands, are a burst of color. In every period of the year the market offers the freshest produce. Autumn is a generous season with the last of the summer fruits and vegetables – peaches, grapes, prickly pears, tomatoes and peppers, as well as early produce such as broccoli, pomegranates, persimmons and chestnuts. The market is also the best place to find spices and herbs, dried fruit and tomatoes and all those ingredients reflecting Sicilian culinary traditions. City dwellers, especially those living nearby, prefer going to the market daily to buy the goods necessary for the family meals. 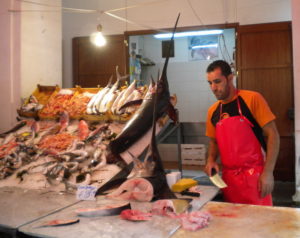 The Vucciria is best known as a fish market. The typical white marble fish counters, called balate, display the catch of the day: tuna, swordfish, calamari and octopus, but also mussels, urchins and clams, for the joy of fish-lovers’ palate!

There’s an old Sicilian saying that refers to the fish counters that are continuously splashed with icy water to maintain the fish cool and fresh, it says: “I balati ra Vuccirìa ‘un s’asciucanu mai!” which means “the counters of the Vuccirìa market will never dry”. Consequently when people from Palermo refer to something that will never occur they say it will happen: “quanni i balati ra Vuccirìa s’asciucanu” (when the counters of the Vuccirìa will dry).