Ragusa Ibla and the Big Quake 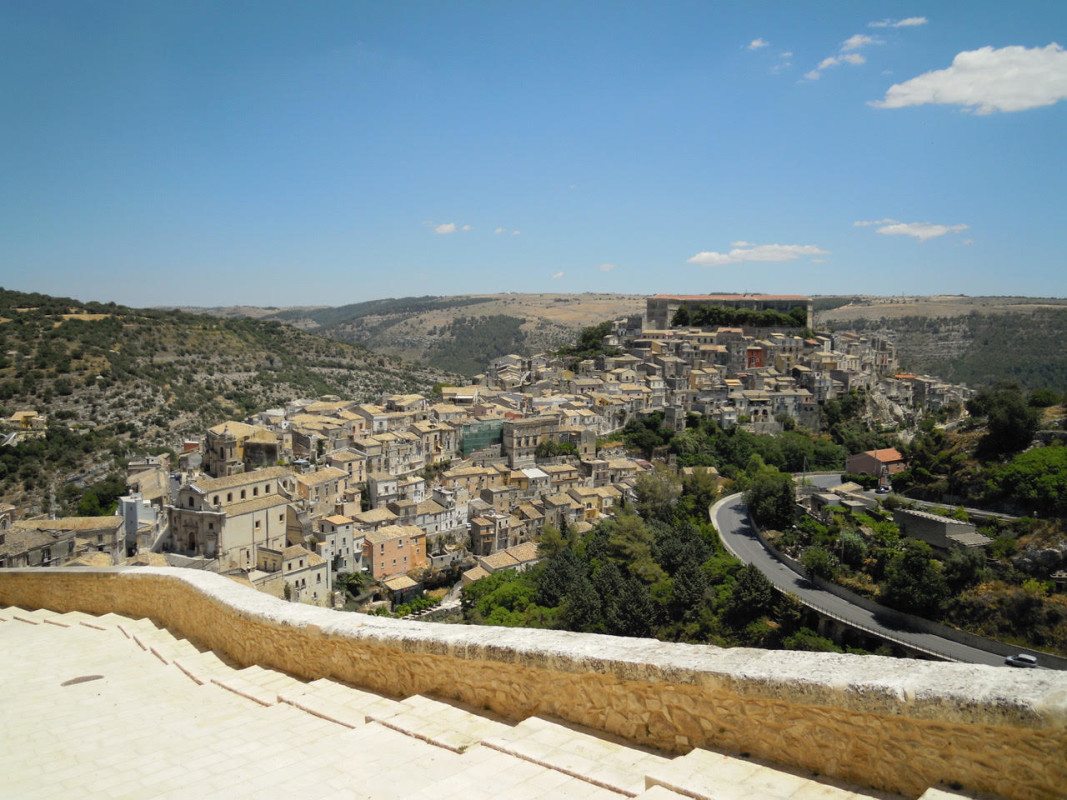 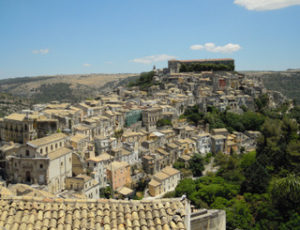 Spanish control of Sicily began to crumble during the 17th century. With about only 4,000 troops to control the island Spain was not able to squash riots in Palermo and Messina, riots over a lack of bread, unfair taxes and laws against using flour to make sweet pastries. Sicily without pastries. No wonder there were riots.

The 17th century also witnessed one of the worst earthquakes ever to strike Sicily. On 11 January in 1693, at nine o’clock at night, a powerful earthquake shook the southeast corner of Sicily. It was severe. It registered 7.4 on a magnitude scale and lasted four minutes. The quake was followed by tsunamis that pounded the towns and villages on the coast. It is estimated that 60,000 people died—including almost two-thirds of the population of Catania.

The Spanish viceroy at the time of the 1693 earthquake was Juan Francisco Pacheco y Téllez-Girón, the Consort Duke of Uceda. He appointed Giuseppe Lanza, the Duke of Camastra, and three generals to organize and supervise relief efforts. The viceroy also organized two councils in Palermo that were directed to draw up plans for rebuilding the most damaged towns and cities.

Vincentius Bonajutus wrote an account of the earthquake for the Royal Society of London, an organization of eminent scientists founded in 1660. He said, “So horrid and amazing a shake was at once felt over all Sicily . . . It was in this Country impossible to keep upon our Legs, or in one place on the dancing earth . . .” In his report Bonajutus lists the towns and cities damaged by the quake. Catania, before the quake, had a population of 18,914. Almost 18,000 died in the quake. Noto, Modica and Ragusa suffered fewer fatalities.

The decision was based on an old rivalry between the parish of San Giorgio and the parish of San Giovanni Battista. The aristocracy and the San Giorgio parishioners stayed in Ragusa Ibla; the San Giovanni parishioners moved to the new Ragusa Superiore. The two sections of the town are separated by a deep ravine called the Valle dei Ponti. Four bridges connect Ibla and Superiore. The two towns were merged in 1926. The best way to get to Ragusa is by bus. Parking a car in either part of Ragusa looks like a positive nightmare. In 2013 I took a bus from Palermo. The bus crossed a good swatch of the island, through a lot of 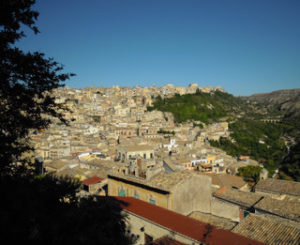 beautiful rolling hills and some sharp, craggy hills too. From the bus station in Ragusa Alta I took a local bus to Ragusa Ibla and settled into a hotel called the Giardino sul Duomo. From the hotel’s garden I could look across the valley to Ragusa Superiore.

The hostess of the hotel was a classic case of a German woman from Munich who came to Sicily years ago and decided to stay. I can’t forget the homemade jams she served at breakfast in the garden. In 2015 the hotel built a swimming pool in the upper part of the garden and made other improvements in the architecture of the hotel.

In 1992 UNESCO made the Late Baroque Towns of the Val di Noto a World Heritage Site. Ragusa may not be quite as baroque as Noto, but it comes in a close second. The Cathedral of San Giorgio in Ragusa Ibla, designed by Rosario Gagliardi in 1738 and built between 1739 and 1775, replaces a church destroyed in the earthquake. We should not be surprised that the deadly earthquake of 1693 gave birth to the lovely baroque architecture in Noto, Ragusa and Modica. Sicilians seem always to have known how to turn destruction into something beautiful. Sometimes. Unfortunately after the bombing of Palermo in 1943 Sicilians built some atrocious apartment houses on many of the city’s avenues. But that is another story. Back to the baroque.

San Giorgio cathedral is built on the top of a hill and faces the Piazza Duomo.  The facade, a masterpiece of baroque design, 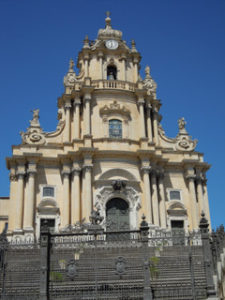 resembles a wedding cake. It is theatrical and flamboyant with columns that support pediments of scrolls and curves. The staircase of about 250 steps is typically baroque and makes the cathedral into a major drama and the central focus of the piazza. San Giorgio pulls the piazza together.

Ragusa Ibla has charms other than baroque architecture. All of the town’s building stone, which ranges from warm gray to pale yellow ochre, is friendly stuff. If you wander up the streets behind the cathedral you can look down on the aged terra-cotta tile roofs of the town. The colors of the tiles cast a spell of security. The tiles are old and silent and crusty but they protect the families who live under them. They paint a picture that is cozy and snug. If you can’t relax in Ragusa Ibla there may be something seriously wrong. The Giardino Ibleo, Ragusa’s public garden, is an ideal place to eat lunch. The arcade of stately palms makes a kind of organic architecture that is beautiful and impossible to resist. There are park benches. And trash cans. Who could throw trash in this garden? 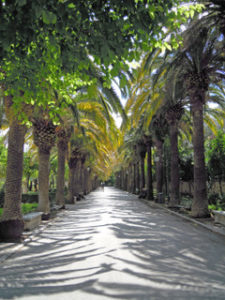 In October Ragusa Ibla hosts a Buskers Festival, the Festa di Artisti di Strada. The festival was launched in 1994. Today it takes over the public garden, the piazzas and streets of Ragusa Ibla for a week. Street performers and musicians come from all over the world. Clowns make fun and acrobats do the unbelievable things that acrobats do. Singers sing and dancers dance. Magicians swallow swords and jugglers juggle flaming torches. The street performers of the Buskers Festival reach back into the 16th century when Sicily’s towns and villages were visited by the cantastorie. The cantastoria was a story singer who worked in the streets and piazzas of the towns he visited. He sang of love affairs, unrequited love affairs, political events, terrible crimes, marauding pirates and crop failures and hungry children. Some of his songs were poems that he set to music. To illustrate his songs he used paintings and drawings on sheets of paper or boards. He was actually a newsman—and like the buskers of today, he was an entertainer.

The Piazza Duomo, which is the center of the Buskers Festival, is dressed in a row of palm trees and period lamp posts. Foodies know Ragusa for its local cheeses and salamis but you can also find interesting gelati in Ragusa. On one side of the piazza is the Gelateria di Vini e Enoteca. One interesting gelati is flavored with Nero d’Avola wine. Other flavors include pomegranate, but only in November and December, and a local olive oil. Their selection of Sicilian wines comes 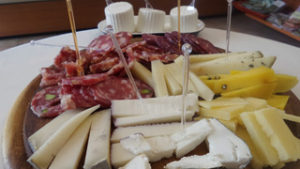 from many of Sicily’s leading vineyards.

Just beyond the piazza on the Corso XXV Aprile is the Salumeria Barocco, a shop that supplied all of my lunches. Their selection of cheeses is unique. There is Ragusano, a kind of caciocavallo; Provola ragusana; Ubraico, which is aged in Nero d’Avola or Zibibbo wine; Robioline al pistachio, a goat cheese with pistachios; and a goat cheese made from the milk of the local Girgentina goat. Since I visited Ragusa Ibla the Salumeria has expanded with an outdoor cafe on the sidewalk in front of the shop. Inside you can order a cutting board full of local cheeses and salamis and then relax at a cafe table. 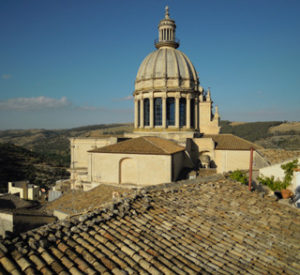 The earthquake of 1693, while it caused considerable loss of life and destruction of houses with terra-cotta tile roofs, gave birth to a revival that created Sicily’s well-known and greatly admired baroque architecture. If it is difficult to forget the lives that were destroyed in the quake, it is also difficult not to be seduced by the beauty of Ragusa Ibla’s San Giorgio cathedral and by the friendly and charming spell of the town’s colors and flavors.