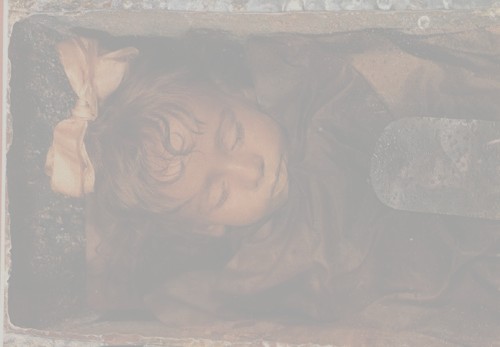 What is the secret of the perfect preservation of the corpse of a little Sicilian girl who died almost a century ago? 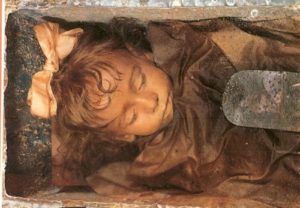 The body of Rosalia Lombardo – Palermo’s famous ‘mummy child’ – is considered by experts to be one of the best preserved mummies in the city’s Capuchin Catacombs. It seems as though the child is merely sleeping in the tiny coffin in which she lies. Her body is covered with a blanket and the only visible part is the tiny face with rounded cheeks and blond curls tied with a yellow ribbon.   The story begins in 1920, when Rosalia Orlando, a little girl not even two years of age, dies of bronchopneumonia. The family falls in grief for the loss of their beloved child and decides to have her body mummified. The father calls upon Alfredo Salafia, a well-known local taxidermist and embalmer famous for having invented an innovative mummification formula. The success of Salafia’s formula had been presented a few years earlier at the Eclectic College of New York and consisted in a mixture of formalin and other elements. When Alfredo Salafia died of stroke in 1933 he had never revealed the exact formula he had successfully created.

In 2009, Dario Piombino-Mascali, an Italian biological anthropologist and researcher at the Institute for Mummies and the Iceman in Bolzano, was working on a project related to the mummification phenomenon and trying to discover the Salafia method. His research brought him back to his homeland of Sicily, and to Palermo’s suggestive Catacombs where the Rosalia mummy was kept. Funded by the National Geographic Society’s Expeditions Council, the young anthropologist continued his research and tracked down the living relatives of Alfredo Salafria. Piombino-Mascali contacted Salafria’s grand-daughter Anna and discovered that she had saved her grand-father’s manuscripts. The excitement of finding the long-searched-for formula led the young scientist to Anna’s home where the woman handed him a handwritten memoire in which Salafia had recorded the chemicals contained in his secret formula.

A composition of formalin, zinc salts, alcohol, salicylic acid, and glycerin was the revolutionary method used by Salafia to inject into Rosalia’s body. Formalin is now widely used by embalmers but it was Salafia that first used the solution. However, studies reveal that the element most responsible for Rosalia’s amazing state of preservation is the zinc salts. A special mix of paraffin dissolved in ether was used to preserve the facial features of the child. Piombino-Mascali considers the self-taught Salafria as an artist. “Alfredo Salafia,” he says, “has elevated embalming to its highest level.” Dario Piombino-Mascali dedicated a book to Alfredo Salafia, entitled ‘Il Maestro del Sonno Eterno’ (‘The Master of the Eternal Rest’). He is also the co-author of a scientific publication ‘The Salafia Method Rediscovered’. For better conservation of the Rosalia mummy, a sophisticated steel and glass showcase was recently built to allow continuous monitoring.

The Rosalia Mummy can be visited at the Capucin Catacombs of Palermo inside the Chapel dedicated to Saint Rosalia, the city’s patron.