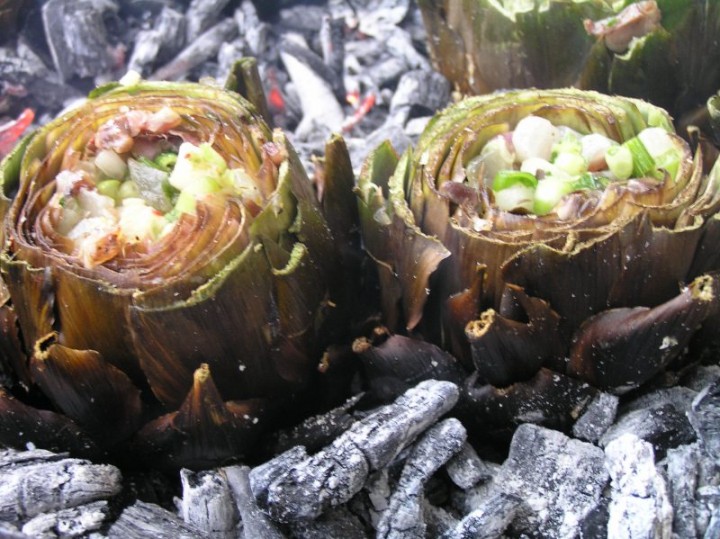 “Artichoke [Cynara scolymus], a member of the thistle family. The cultivated globe artichoke is an improved form of the wild cardoon…which is a native of the Mediterranean region with a flower head intermediate in size and appearance between artichoke and common thistle. The true artichoke may have evolved originally in N. Africa, although some have suggested Sicily as its birthplace.”*

At the beginning of the Sicilian spring the rain is punctuated by days of glorious sun, the initial warmth caused by the scirocco wind from the African desert which pushes the seasons onwards and blows the seeds of spring in the air.

One day of sunshine becomes two days of mist and rain, which gives way to two days of sun, then one of rain, a juggling of seasons which confuses the body and makes you desire summer even more desperately.

The white blossoms of the fruit trees blend with shadows of greys and greens, making the spring seem, like an armistice which allows the winter to surrender itself to springtime and begin the cycle again.

Sicilian artichokes too seem as prickly and unwelcoming as the winter time but after they are liberated from their external spikes their internal fleshy flower is a delicate balm for the ending winter.

It is always a great source of joy to prepare these staples of the Sicilian table every year. They may seem difficult to cook but they are really quite versatile, they can be stuffed with breadcrumbs, cheese and parsley or the tender internal leaves can be prepared with bacon and onions together as a pasta dressing.

Without doubt the best way to prepare the first artichokes of the season has to be to stuff them with a combination of fresh spring aromas such as smoky pancetta bacon, parsley, spring onions, garlic, finely sliced celery, a pinch of hot chilli pepper which are all soaked together in olive oil and a squeeze of lemon juice and cook them slowly over hot coals, or ‘a braci’ as they say in the local dialect.

Covering the richly flavoured artichokes with hot smoking embers and letting the stuffing gradually imbue and infuse itself into the sweet simple taste of the artichoke  is the best way to experience the flavours of this often misunderstood vegetable.

‘An artichoke is the edible flower of a thistle like plant and is a member of the same botanical family as the Sunflower, its scientific name: Cynara ‘scolymus’, derives from the Latin ‘canina’ or canine and the Greek ‘skolymos’ or thistle.’**

According to Greek mythology Zeus is said to have transformed his beautiful lover Cynara into a thorny artichoke as punishment after she went back to her family on earth after being taken to Olympus where Zeus had promised to make her into a goddess.’ ***

Cooked in hot coals the artichokes tough external leaves are crusty and burnt but act as a protective shell as the internal tenderness becomes infused with the taste of the stuffing . Devouring them after prepared is messy, the oil spills over everything, but it is all thoroughly satisfying. The fat of the pancetta bacon melts and amalgamates with the sweetness of the pork and vegetable filling in an irresistible smoky flavour.

Sicilian’s love to cook their meat and vegetables over hot coals as it gives all food an enhanced flavour. This method can be time consuming and difficult to maintain as often the charcoal consumes itself before the food is cooked and the briquettes need to be topped up. But like all slow methods of cooking and preparing fine food, it is  worth the wait.

*** Mythology of the artichoke downloaded from Wisegeek.