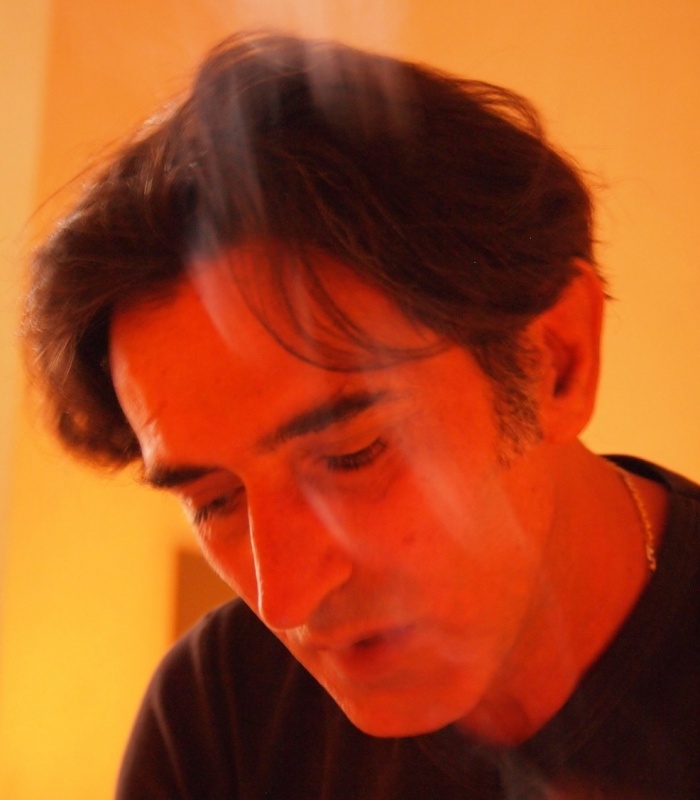 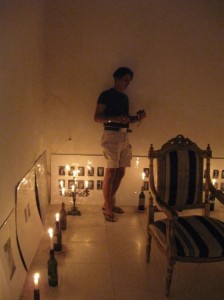 The first thing I noticed was his startling blue eyes; not something you often see in a Sicilian. They were sharp, clever, but kind. And they sat in a handsome, graceful face. In fact, Saverio exudes grace; every move he makes, the sweep of his hair, the curve of his spine as he turns. It is not hard to imagine that he once made his living as a model and an actor.

Nick and I were introduced to Sav by our Irish friend, Bernadette and we became part of a small group in the summer made up of expats & Sicilians, film-makers, photographers, teachers, retirees. At the centre of this group was Sav. It was quite some time before I learned that Sav had spent time working successfully in the US as an actor and model and that he, were the aristocracy still in power in Italy, would be a member as the Duca di Palma di Montechiaro. My curiosity was peaked.

I asked Sav if I could interview him for my blog and he kindly agreed. We met him, late one afternoon, in his studio in the old part of Cianciana, not far from our house. It was a small, two-room space that he had lit with candles. Around the edge of the walls, he had propped framed photographs, mostly black and white, that he had taken both in Italy and in the United States. His talent as a photographer was quickly apparent. “I have other artwork.” he told us as he pulled out his phone and showed us his paintings and drawings. Again, his talent and vision came through clearly. We sat down; Sav lit a cigarette and began to tell me about his life.

Sav was born and raised happily in Cianciana, surrounded by family and friends. At the age of nine, Sav moved with his family to England where he was enrolled in school and developed an impeccable English accent, so perfect that when I met him the first time, I assumed he was English.

As I mentioned, Sav’s family was part of the Italian aristocracy. The monarchy in Italy existed in various forms from the fall of the Roman Empire until the deposition of Napoleon I in 1814. It was reestablished during the period of Italian unification in 1861 when the House of Savoy rose up over the Italian peninsula, Sardinia, and the two Sicilies. This lasted until just after the Second World War when, on June 12, 1946, the monarchy was formally brought to a close, and the king, Umberto II, left Italy for good. 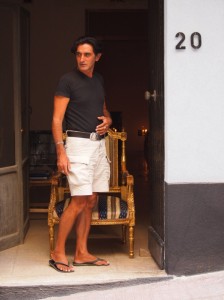 The aristocracy in Sicily has an interesting history. Because of its location, size and landscape, Sicily was considered a very valuable piece of property. Invaded over and over and ruled by men from places such as Greece, Spain, the Ottoman Empire, Carthage and France, the influence of all of these are apparent in the architecture, the food, the customs and in the faces of the people. This is true of Sav. His startling blue eyes and aquiline features are certainly a genetic nod to his Norman background but his warm, olive complexion is most definitely rooted farther south and to the east.

It was not, however, the story of his family’s history, that made Sav’s eyes light up. When he began to talk about his career in Hollywood, his excitement lit his face. At 19, Sav had flown to Texas, the land of Dynasty and Dallas and women in mink coats. This was an eye-opening experience for the young Saverio as he made his way from there to San Francisco and finally to L.A.. At the time, there were few Italian actors in Hollywood and it gave him a bit of a leg up. He worked in commercials, music videos and film. His list of acquaintances reads like a who’s who of ‘90s celebrities: Lee Horsley, George Clooney, Scott Baio, Jennifer Aniston, Gary Cole, Rosanna Arquette, Isabella Rossellini, Iman, Anna Nicole Smith, Ray Bradbury and the ageless Elizabeth Taylor. Sav played a wide range of roles in a variety of films and television series: Son of the Morning Star, Married With Children in London, Mousehunt, Mafia, Sisters, and Twins. He was in commercials for Martini Spumante, AT&T and others.

Sav returned to Italy in 1998 to live in Rome and then again in Cianciana. Unfortunately, this put a crimp in Saverio’s career. As a member of SAG (Screen Actors Guild), he is not able to accept work that does not pay the SAG rate, yet television and films in Italy do not pay as well leaving him in a Catch 22. When we left, Sav was waiting to hear about the possibility of a role in a new mini series called The Vatican and playing the role of a member of the ‘black nobility’, a Roman prince schooled in the rules of correct behaviour in the Holy See.

It was a real pleasure spending time last summer with such a talented, interesting yet humble man as Saverio. Nick and I are truly looking forward to sitting in the Trieste or Clock Tower Bar and catching up with Sav over il caffe’ or a gelato in the coming summer.

Diane Cacciatohttp://mysicilianhome.wordpress.com
Diane Cacciato divides her time between Sicily and Vancouver Island on the west coast of Canada. Diane and her Sicilian-Canadian husband, Nick, have travelled extensively, including most parts of Sicily and much of Italy. She is a freelance writer, novelist and poet, a social justice activist and she also works as a teacher-librarian. She publishes under both Diane Cacciato and Diane Gallagher. Her most recent novel, Greenwich List, is available as an ebook on Amazon. She is currently working on a novel based in Sicily called The Bastard of Saint Genevra and on a memoir, as yet unnamed.