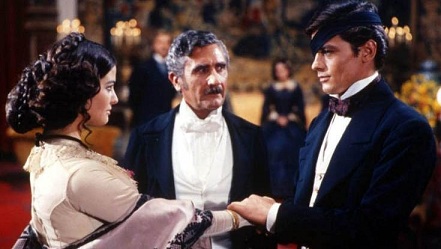 His name was Emanuele Viscuso. From the moment he clamped onto my hand like a vice, and his eyes penetrated mine, similar to a sculptor detecting an image trapped in a chunk of marble, I felt reminded of the famed Rossano Brazzi. I wondered if Emanuele and Rossano might have been distant cousins. In point of fact, Viscuso was every bit as famous in his world as Brazzi had been in his.

In a humble manner, this superstar of the arts spoke of Luchino Visconti’s movie. He told the audience that Il Gattopardo was not only a Sicilian movie, but a movie intended for the world. He also mentioned that the script revealed a special Sicily. He added that the more we examined the film, the more we discovered.  I looked around. The chatter faded. The seemingly coordinated audience tremors ended. Everyone, except for the camera wielding, sat still. All were focused on Viscuso, many with mouths agape. His brief and stirring speech concluded, the host took a seat, and the movie began.

Three hours later, the final curtain closed.  I could not get near that most popular and acculturated man. I’d only scheduled a two day attendance, and the clock was ticking as to how much time remained for me to meet and chat with this gifted, artist, linguist, humanitarian, cultural facilitator, and designer.

The following afternoon, as we assembled to meet with novelist D.J. Healey for a book signing, the skies brandished shades of charcoal. The wind snatched my notes, simultaneously bullying my wine glass off my table. As I reached down to retrieve them, I saw Emanuele Viscuso entering the outdoor veranda preparing to start the session.

I felt immersed in a movie scene. All guests on that rooftop oasis stopped. Time, at least in that setting, seemed to hiccough. Eyes followed the distinguished looking man. I wondered, and then said sotto voce to my wife, Adele, that this might provide an opportune window to meet this genius. I quieted and hesitated. My lovely wife reminded me of my Mazzarese mother. Remember your mom used to tell you that at times you have to be a facci tosta. “Go!  Be brave. Introduce yourself.”

I walked over, lead footed, hesitating with each step.  To my surprise, Emanuele smiled and extended his right hand. Despite my experience with this sort of activity, my mind froze. My collage of questions deserted me. For a moment, I stood speechless. Fortunately, as he initiated the conversation my most important question resurfaced in my mind.

“Why do you do this?” I asked. “You are an enormously busy person, with a multiplicity of talents and demands, yet you host this film festival every year.”  I recalled my planning and hosting similar, yet smaller scale events. Putting it all together proved a most difficult task. His answer eliminated the need for my asking any other questions. He simply stressed that he wanted to change the stereotype about Sicily and Sicilians. There was no longer a need for formal questions.

We chatted pleasantly for a few more minutes. I joked about my grandmother calling me mascalzone e scustumato.  He suggested that she might be a tad Neapolitan since scustumato possessed a Neapolitan tinge. That revelation raised my brow, and forced me to think. Not that it mattered to me, but it tweaked my curiosity. I suggested that she might have picked that up in the USA. I recalled my ordering corned beef and cabbage in Ireland, only to be told that it was not an Irish dish. Later, in my chat with a restauranteur in Dublin, he suggested that Irish- Americans created the meal in conjunction with fellow immigrants to America. Viscuso’s command of multiple languages opened my mind and made me wonder if my Nonna picked up the term from her new American neighbors from Naples.

The clouds opened wide, dumping pools of salty water on our discussion of D.J. Healy’s insightful book, Kindness for the Damned. I grabbed what I could in hand and dragged it to an inside conference room. The crowd and circumstances barred me from speaking to Viscuso again. Throughout my four hour drive to my home located on Disney’s apron, my mind divided its time between thinking of the man’s genius, wondering about my grandmother’s roots, and lamenting the brevity of my conversations with Emanuele Viscoso. My Castellamarese dad’s words whispered in my mind,” Better to spend five minutes of quality time together than days of distracted coexistence.”