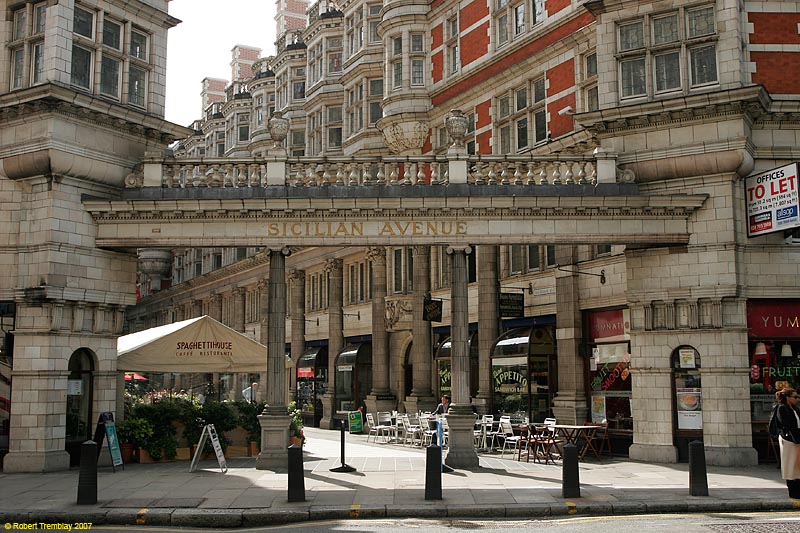 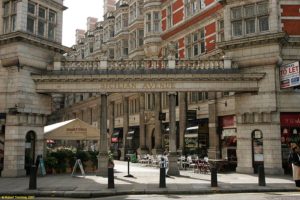 “Meet me at the Princess Louis.”, my friend instructed. I wasn’t going to argue, because the ornately carved, sumptuously tiled bar areas of this historic Holborn pub make it an absolute gem. The beer served there is pretty good, too. But I hadn’t been to the area in years, and, coming out of Holborn tube, I set off in the wrong direction…and almost immediately came across the unique piece of London architecture located on the apex of Southampton Row and Bloomsbury Way known as Sicilian Avenue.

It provides an impressive, if somewhat whimsical sight. The architecture style employed isn’t that of Sicilian Baroque, the distinctive form of Baroque architecture that became fashionable on Sicily in the 17th and 18th centuries, but, instead, the neo-classism that superseded it, on both the island, and elsewhere in Europe. The Avenue has grand entrance ways of Ionic columns supporting elaborate balustrades, with the name ‘Sicilian Avenue’ inscribed upon them.

Sicilian Avenue was designed by the architect R.J. Worley in 1906, and completed in 1910. The Italian marble that originally covered the avenue was replaced in the 1920’s although a small section still remains. It was created as a pedestrianized shopping street, one of the first in London. The area is still used as such today, and contains a variety of shops and restaurants, including second hand bookshops and restaurants (including one from the ‘Spaghetti House’ chain, but none with a Sicilian connection). Be sure to look up at the lovely ornate carved stone facades; above, the Edwardian mansions are made from red brick with white terracotta dressings.

The edges of the walkway are lined with flowers and bushes, and in the summer, particularly, this pleasant spot has a truly old-world Italian feel. So next time you’re visiting the British Museum (a five minute walk away) – or, indeed, the Princess Louise Public House – be sure to admire this delightful splash of Sicily in the centre of London.

Charley Bolding-Smith
Charley is a self-confessed dromomaniac. A man with a great future behind him, he spent many years as an international loss adjuster in the Middle East and Caribbean. Then, in a mid-life career change, he turned to project managing software implementations in the United States. Life was good, but the job security wasn’t. After many misadventures, he ended up in South East Asia, working as a freelance technical editor for INGOs, such as Handicap International, and writing features for the ‘Phnom Penh Post’. He is now based in London, and dreams of visiting Sicily.