A Sicilian Cannolo in Space! 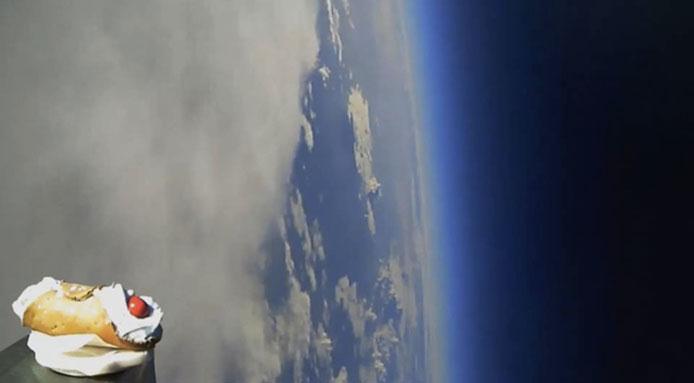 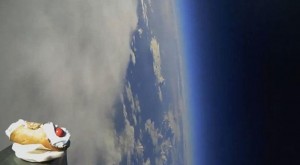 In the last issue of Arba Sicula we published an article about the first Sicilian astronaut, Luca Parmitano, who spent six months in space, working in the International Space Station. We are happy to report that Mr. Parmitano is now back on earth after successfully completing his excursion in space. Now, we have another Sicilian exploit that testifies to the great Sicilian ingenuity and eccentricity.

A group of young scientifically-minded Sicilians, Paolo Capasso, Antonella Barbera and Fabio Leone, accomplished a feat that deserves to be recorded in the annals of science not only as a spoof but as a serious accomplishment which could not have been done without a good deal of scientific know-how in a number of areas such as the flights of helium inflated balloons, computer programming, photography, atmospheric conditions in the stratosphere, weather and winds etc… The task could not have been accomplished by people who did not possess such scientific skills and knowledge.

What did these three dedicated people do? They sent a Sicilian cannolo into space! Ok, it was not a real cannolo, because the pastry and the ricotta cream would have been destroyed by the frigid temperatures of space, but the object they sent into space was a cannolo in every other aspect. The only thing was that you could not eat it, as it was made from synthetic materials that could withstand the rigors of space. But it looked awfully appetizing down to the cherry on the cream!

So on March 5, 2014, from the top of Rocca di Cerere nature park, near Enna, the three Sicilian space enthusiasts inflated a balloon with helium and attached to it a plastic box, actually it was an insulated ice cream box, which contained miniature video cameras and freed the balloon that climbed to the height of nearly thirty thousand meters. The video cameras provided wonderful views of the ascent and of the curvature of the earth. The funny thing was that the cannolo remained always in the field of vision of the cameras so that you literally saw a cannolo in space!

The images were also transmitted to the ground to the “Sicilian Space Program” which recorded the whole thing. Eventually the cannolo space probe reentered the earth’s atmosphere and fell to earth. The crew of the Sicilian Space Program following the descent managed to recover their cannolo and videocameras right away, after battling a herd of sheep that was barring their way to the location where the probe hit the ground in the village of Bonpietro, about 25 kms from the launch site.

If you wish to see the flight of the cannolo, go on the internet and search for Sicilian Space Program – cannolo nello spazio- OFFICIAL VIDEO – ENG.

When asked about the goals they had in mind for the flight the three engineers/computer scientists said it was a “gift to the Sicilians and a way to make them smile; a performance, an ironic-scientific experiment in order to reevaluate, for a moment, a land renowned for too many negative bests: Sicily.” Filmmaker Fabio Leone, 34, who recorded the project with Antonella Barbera, 38, said: “Sicily has always been a place of negative connotations, mafia and unemployment. We wanted to lift up Sicily in our own way.”