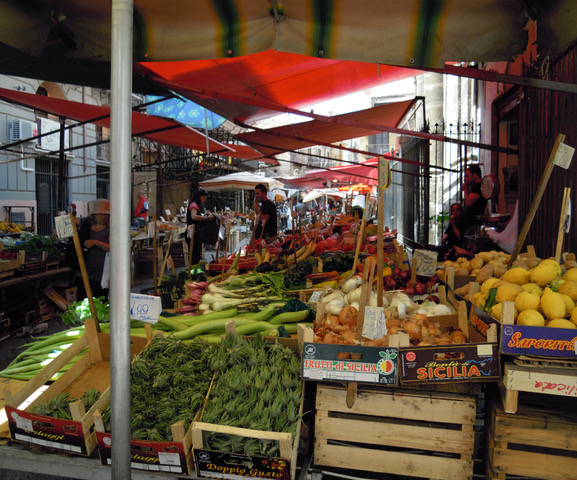 The family is the bedrock of Sicilian society. The father makes certain that out on the street his family is respected and admired. In the home the mother, and often the grandmother, guide the friendships and relationships of the children and make sure they do well at school.

The mothers and the grandmothers however are in charge of a another very important aspect of Sicilian culture—they cook the family dinner. In Palermo they depend heavily on the outdoor food markets. Three of the city’s markets are most important—the Ballaro, the Capo and the Vucciria.

The layers of cultures that piled up in Sicily over the centuries brought with them a market basket of very fine food. Today, except maybe for the pastries and gelati, we call it the Mediterranean Diet.

Not everyone has always recommended the food of the Mediterranean. Plato came to Sicily several times and was appalled by Sicilian extravagances. He said in his 4th-century Epistle VII, “And when I came to Sicily I was no wise pleased . . . with ‘the blissful life’, . . . replete as it is with Italian and Syracuse banqueting; for thus one’s existence is spent in gorging food twice a day and never sleeping alone at night.”

In the tenth century, Mohammed Ibn Hawqal, a Mesopotamian writer and geographer, and a Baghdad merchant, did not applaud Sicilian cuisine either and criticized a habit of eating raw onions. “It is this that has clouded their imagination; offended their brains; perturbed their senses; altered their intelligence; drowsed their spirits; fogged their expressions, untempered their constitutions so completely that it rarely happens that they see things straight.”

The first true cookbook of which we have evidence was The Art of Cooking by Mithaecus, a Greek-speaking Sicilian who lived in Syracuse in the 5th century. Syracuse was also the location of the first known school for cooks, a school founded by Labducus during the 3rd century.

Archestratus, the 4th-century Greek poet of Syracuse—and Gela—was known for his poem Hedypatheia or The Life of Luxury. The complete poem is lost but 62 fragments survive. In the poem, which is sort of a cookbook, he advises the gourmand where to find the best food in the Mediterranean.

For Archestratus cooking was an art. Fish and how to cook it was his main concern. Of the 62 fragments of his poem that remain, 48 concern fish. In his advice for cooking tuna he wraps the fish in fig leaves with a small amount of marjoram. He insists that there be no cheese. He would agree with today’s requirement that you don’t put grated cheese on seafood pasta.

When Johann Wolfgang von Goethe visited Sicily in 1787 he thought that Sicily’s vegetables were delicious. Lettuce he said was very tender and tastes like milk. The olive oil and wines he said were good but would benefit from better preparation. Fish, he thought, were excellent.

Palermo mothers know the outdoor food markets. They know which vendors have the best ingredients for the family dinner. Sicilian extravagance is nowhere more theatrical than in the outdoor food markets of Palermo. There are riotous piles of carciofi (artichokes) and cucuzza (a very long light green squash) and fishmongers’ tables groaning under the weight of monstrous tonno (tuna) and pescespada (swordfish).

Today the Vucciria market, which used to be Palermo’s most famous market, is a shadow of the market that was there before World War II. During the 1990s the heroin trade became considerably more important, more profitable, than selling swordfish or cheese. The killings that accompanied the heroin business cast a dark shadow over the once thriving market and the entire neighborhood.

The Vucciria market has been eclipsed by Palermo’s other outdoor markets, especially by the Ballarò market in the Albergheria area, which is about a ten-minute walk from the Central Station. The Ballarò goes on and on for many blocks. Stalls are loaded up with heaps of tomatoes and oranges and large bright red shrimp. Artichokes with long stems are piled on the street. Where else can you buy a kilo, 2.2 pounds, of tomatoes that look and smell like real tomatoes and cost only 50 cents.

Two cheeses, ricotta and mozzarella, are two of the main ingredients that mothers and grandmothers work with to make the family dinner. In Sicily most ricotta is made with sheep’s milk simply because there are more sheep than cows. The best time to buy ricotta is in the fall through the spring. Sheep don’t produce good milk in the summer.

One vendor at the Ballaro market sells squares of baked ricotta topped with tomato, herbs and anchovies. They are delicious. I am sure baked ricotta shows up on the family dinner table. Palermo mothers bake ricotta into a cheese called ricotta infornata which becomes firmer and develops a caramelized flavor. Usually ricotta infornata is served with honey or fresh fruit.

The mozzarella used by Palermo mothers is always the freshest available. It makes an excellent part of any antipasto. Just slice it, pour some good extra virgin olive oil on the cheese and then a bit of coarse sea salt and pepper and your dinner is off to a good beginning.

Another ingredient that is treasured is the cucuzza, a long pale green squash that when it is trained on a trellis grows straight and often as long as five feet.

When peeled and chopped cucuzza has a knack for absorbing the flavors of other vegetables such as tomatoes, wild fennel, dandelion greens and artichokes. It often shows up on the family dinner table in a tomato sauce over pasta.

The making of tomato sauce is a ritual that many Palermo mothers tackle every summer. There are two basic methods of making sauce. One method passes scalded tomatoes through a mill. The tomato sauce is then put into bottles that are capped and sterilized in boiling water. The other method heats the empty bottles and fills them with boiling sauce, caps the bottles and then lays them out on woolen blankets that serve to keep the bottles warm for several days. There are some other methods that include putting onions or basil in the boiling tomatoes.

Olive oil occupies the same kind of space in the food hierarchy as tomato sauce and ricotta. Sicily is covered with olive groves. Sicilian olive oils are not the same as olive oils from Tuscany or Liguria. They are more grassy and have a sharp almost peppery edge. Sicilians refer to that edge as the pizzica, or the little finish.

Some of the best oils come from the hills near Trapani in the west of the island, hills that are covered with rows and rows of trees, some of which are beautifully gnarled and are three or four hundred years old. Food experts trace domesticated olive oil to Turkey.

Sicilian dinners almost always begin with antipasto based on excellent olive oil. A slice of toasted semolina bread splashed with olive oil and a pinch of coarse sea salt makes for a delicious beginning. Often a slice of tomato or some anchovies makes for an even more interesting antipasto.

There is no way to discuss Sicilian cuisine without mentioning pasta. Pasta secco, pasta out of a box, is usually made from semolina flour, a high-protein, duram wheat flour. In Italian it is semola di grano duro. Duram wheat absorbs less water so you can get a good al dente texture in your pasta.

There are several rules for making pasta. The most important of these rules is that each kilo of flour gets four eggs. Some artisanal pasta makers go so far as using 10 eggs per kilo of flour. The result is a pasta that even though it is pasta secco will cook very quickly, very much like fresh pasta. And there are other producers who use no water. The best pasta secco is dried slowly at low temperatures for three to four days.

In the western part of Sicily coiled strands of pasta called busiate are served with the Sicilian version of pesto that is made with almonds and tomatoes. Other Sicilian sauces for pasta can be as simple as cheese and olive oil or sardines or anchovies and bread crumbs.

The vendors at Palermo’s outdoor markets, even though they are probably not at all aware of it, play an important role in creating the family dinner. The outdoor markets are a raw and raucous and colorful piece of theater. The vendors yell at top volume about the olives and tuna and artichokes they sell. It is a piece of theater no playwright or director could ever pull together. It’s loud and crowded with Palermo housewives who know which vendors are the best. Together Palermo’s market vendors and Palermo mothers and grandmothers form a pillar of strength in Sicilian society.

At the Ballaro market there is one young vendor who does not fit into the rest of the market’s cast. A cast that spends a lot of time yelling and shouting about their fish and olives and artichokes. Instead he remains quiet and sells nothing but parsley—and sometimes a few other fresh herbs. He is the only vendor who plays a very subdued role in this theatrical food extravaganza.

Nutritionists continue to recommend the Mediterranean diet of olives, fruit, vegetables, grains and seafood. The outdoor food markets in Palermo certainly abound with the ingredients of the Mediterranean diet. The family is the keystone of Sicilian society and it is clear that this keystone is strengthened by several factors that hold the family together—the mother who cooks the family dinner—but also the food and wine that she serves. Food and wine that she bought at one of Palermo’s superb outdoor food markets.