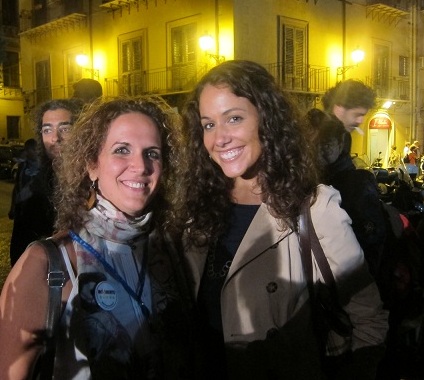 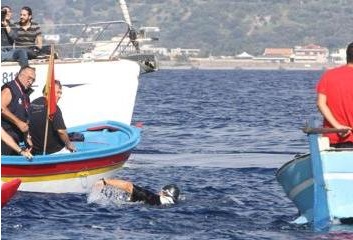 Two weeks ago, he swam the 3.5 kilometers across the Sicily Channel and reached our island in one hour and fifteen minutes. His name is Beppe Grillo. Grillo is a professional comedian and his “hobby” is politics. His first words after touching Sicilian soil were, “Garibaldi was the first to land and he brought the Savoys, in the second landing came the Americans and they brought the mafia, the third to land is me with the MoVimento 5 Stelle …” When I first heard of this event, I was concerned that the results of this landing would parallel the previous two. In that case, I’d be disappointed. I thought, no thank you, we don’t need more of that failed past.

Three years ago, Grillo initiated the political party called Movimento 5 Stelle (5 Star Movement) as a form of protest against widespread corruption in Italy. At the 2012 elections, the M5S proved to be quite successful. Today, M5S is the second most popular political party in Italy. Grillo, a native of Genoa, journeyed to Sicily determined to turn anti-austerity populism in this country into votes. Grillo understands that you must win in Sicily to succeed in Italy. He drove to every corner of our island for a two week period. During that time, he met with farmers, artisans, and even went fishing with local fishermen. One of his final rallies was scheduled for Palermo. I did not want to miss that historic opportunity.

I drove my car and picked up Traci Badalucco, a Sicilian-American freelance journalist residing in Palermo. Once Traci joined me, I made sure to enter the final destination on my GPS. I was afraid that I would be too distracted by my interview questions while driving. I practiced gymkhana thru the wild traffic of the city. I kept reflecting on the first question I planned to ask. The question was, “Mr. Grillo, in a famous film about Sicily, The Leopard, Don Fabrizio Corbera, Prince of Salina said the following about Sicily, ‘Something has to change for everything to stay as it is.’ Would your change be one of those?” In was somewhat of a rhetorical question, since most of Grillo’s thoughts about Sicily are described quite well on his very “moving” blog titled “Sicily” . Sicilians today still remain skeptical.

We finally approached the site of the speech. Fortunately, we were able to find parking spots easily. After a long day for me (it started in Warsaw on business), I finally made it to the M5S meeting on the evening of October 25, at Piazza Magione in Palermo.

Traci and I chatted with Claudia LaRocca, one of the candidates on the M5S list. The first, and perhaps most “provocative” question was, “Claudia we are pleased with the addition of new and young people to your political process, nonetheless, I wonder, what were the criteria for the selection by the M5S party? What is the difference between your being young today, and those people who were young when they started with Berlusconi or other parties?” She said, “Despite the fact that we are all young people in M5S Sicily, our goal is to represent all of the people. Candidates have not been chosen by age alone, they also need to present other credentials. For example, they must demonstrate outstanding social activities, and to be free of any other political party affiliation. Candidates must have clean public records” (unfortunately, in Italian politics, this seems to be the exception) “Finally, we were elected during a public assembly”.

In terms of the difference between me and the “older” young,” continued Claudia, “is that I don’t view politics as a real lifetime profession. If one were to be elected, that candidate should leave office after a maximum of two election victories. If you consider the activity of a politician as a long-term career receiving 20,000 + Euros monthly, that would inevitably force you to remain glued to your seat of power and to maintain that seat exclusively for yourself. You’d be there to sustain and preserve your interests, as opposed to working for the “common” interest”, which is what we need to bring about.”

The three of us then engaged in a pleasant conversation and you could sense the good faith of a young person really feeling the winds of change blowing in the right direction. She discussed her point of view on Green Economy, as well as emphasizing the concept of Degrowth, whereby GDP is not a real indicator of the wealth (quality of life) of citizens. “My principal concern,” continued Claudia “is focused on effective waste management which is lacking in Sicily, and especially in Palermo. As an ultimate goal,” she concluded,” I continue to strive to simply be myself, humble, but determined and attentive.” Claudia then scurried to the stage where the show was about to start.

Grillo began his show riding a wave of anger caused by dominant political parties of the last two decades struggling to shake the political corruption, scandals, recession and tax increases. His rage was contageous. The man was like a hurricane sweeping across the face of current Italian politics.

“If Sicily changes, Italy changes,” Grillo stormed again, “and then, perhaps Europe changes.“ That was similar to what he wrote in English on his post  addressed to “Sicilians throughout the world.” He is aware of the wind of “Independentism” which is currently in vogue in Sicily. Grillo observed that Italy has been like a stepmother to Sicily, and Europe has not helped either.

His speech amused us when he commented on the useless plan for the construction of the bridge that would connect Sicily to Italy (Ponte di Messina) in order to complete the Berlin-Palermo railway axis. Grillo shouted loudly, in a Sicilian accent, “Che minchia me ne fotte di andare a Kiev, io voglio andare a Siracusa. (I don’t give a damn about traveling by train to Kiev, I want to go to Syracuse).”  The Sicilian rail network is obsolete. It takes three hours to travel from Rome to Milan (600 kilometers), yet it takes nine hours of rail travel to go from Palermo to Syracuse, a mere 260 kilometer trip. Sicily does not need a bridge. It needs a better transport infrastructure.

We attempted to contact Giancarlo Cancelleri, the real candidate for the Sicilian presidency of M5S. He must have been busy at the time, despite the fact that Grillo was the one putting on a quasi one-man show. We hope to meet Cancelleri in the near future here in Palermo.

Three days after the election, it was confirmed that Cancelleri lost to Crocetta from the coalition PD, UDP. M5S did capture the highest number of votes for any single party, allowing Cancelleri  and his team to make a big splash in Sicilian politics. With great pleasure, we would like to congratulate Claudia on her election as Deputy in the Sicilian Regional Assembly.

Sadly, it’s difficult to explain and/or defend those Sicilians declining to vote. More than 50 percent of eligible Sicilian voters did not go to the polls, a very disheartening realization. Do you remember the words of the Principe di Saline to Chavalley in The Leorpard? “We are old, Chavalley. Very old. For more than 25 centuries, we have borne the weight of superb civilizations that have come from outside, never of our own creation, none we could call our own. For 2500 years we’ve been nothing but a colony. I’m not complaining. It’s our fault. But we’re worn out and exhausted.”

Perhaps Sicilians are just “worn out and exhausted”. Voter apathy is the first thing that must change if Sicilians are to achieve their hopes, dreams, and lofty ambitions. The time has come to prove Il Principe is wrong.