A Sicilian in Space 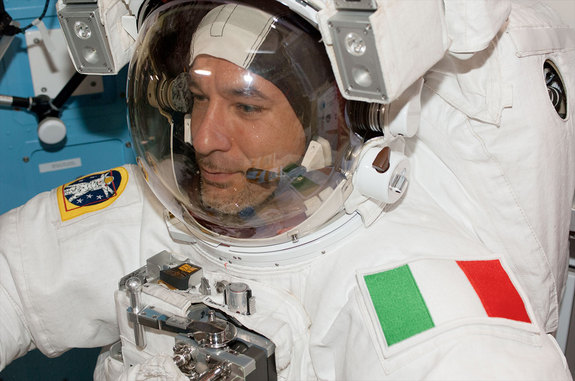 Everybody knows that Sicilians are in every country of the world. Wherever you go, you are likely to find some Sicilians. It happened to me when I was invited to give a lecture in Hawaii. After I finished my presentation, a dozen Sicilians came up to me. Arba Sicula has at least one member in every state of the Union even in Alaska.

Of course, all know that when Christopher Columbus landed in San Salvador, the people who welcomed him were not Indians, they were Sicilians! I’m joking of course, at least for the Sicilians on San Salvador, but in fact we Sicilians have long legs, and either because we need to find work or because we have a great curiosity to become experienced in the ways of the world, we cannot stay still in one place, and we roam the world. Do you need prof?

As I write these few lines, there is a Sicilian in space, flying around the earth. His name is Luca Parmitano, and is from Paternò, a large town on the slopes of Mt. Etna.

Luca Parmitano is the first Italian to be selected as an astronaut to join the other astronauts already present in the International Space Station. Together with the American astronaut Chris Cassidy, Parmitano has been given a mission to walk in space and prepare the space station for the addition of another section.

While the astronauts are up there they have to perform other maintenance tasks, but  the thing that impresses the most is the duration of the mission: six months. Imagine that! It’s obvious that none of them suffer from claustrophobia! Parmitano is a Major in the Italian Air Force and is 36. In preparation for his mission, he had to train for a year as a pilot of the Soyuz Russian Space craft. In 2009 he was named as an astronaut by the European Space Agency.

Parmitano’s mission was named after the famous song “Volare” by Domenico Modugno. But this is not the only thing Italian that is part of the mission. Parmitano wanted to bring the flavors of Italian cuisine to the Americans and Russian astronauts already at the station. So he asked Italian chefs to prepare a special Italian menu that included an antipasto, lasagna, risotto with pesto sauce eggplant parmigiana and tiramisu as a dessert.

As far as I am concerned, he would have done better to include some Sicilian dishes like Pasta a là Norma, or Pasta cu li Sardi, or some Arancini or some other typical Sicilian dish like capunatina. But perhaps up there they are not supposed to eat too spicy or salty food. As a consolation, however, he did include the eggplant parmigiana, which is truly a Sicilian specialty.