Sicily, its Bathrooms and Snakes in the Showers 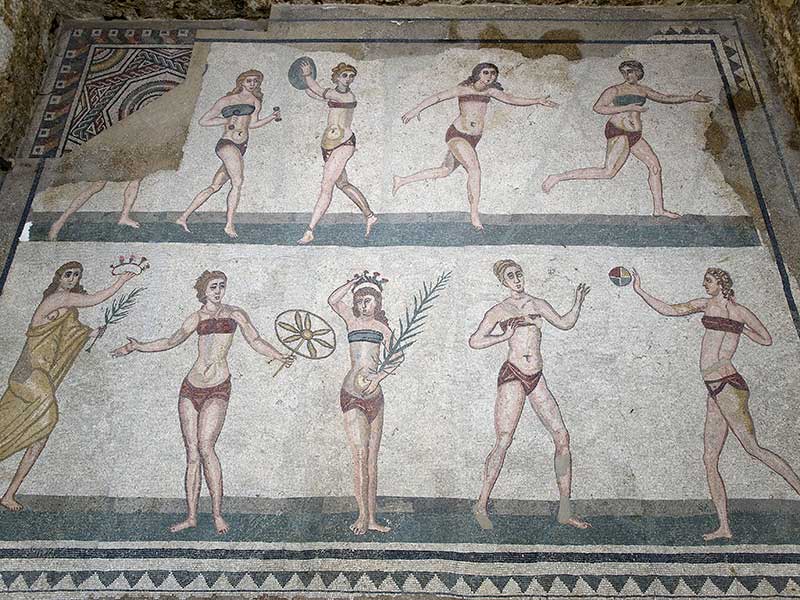 I stood outside Sicily’s wondrous valley of the temples boogieing on line while waiting for a bathroom. Suddenly, the whisper reached my ears, “You need Euros to liberate yourself.” I spun my head around like an evil doll. What now? Nature made its demands. An angel reached out and said, “Hand this Euro to the guardian of toilets. It will pay for both of us.” My crises ended with a lesson learned. I thought back to the collection of Sicilian wash rooms I’d frequented. Some merely required turning on a faucet, while others holding a hand in a lucky lower spot in the sink somehow triggered the release of wash waters. Once I stood before a stubborn and mysterious sink. I gestured, waiting for water to flow. It didn’t.  I then tried to frantically rub my hands at the sink’s bottom. Nothing happened. Finally a pert lady, unfamiliar with Sicilian, Italian, or English languages tapped my back gently. She communicated in a type of sign language, demonstrating peddling motions, much like my Nona flaunted on her sewing machine. That became an “Aha” moment! I soon realized that I needed to step down on a metal bar hiding beneath the sink and water would flow. Feeling absolutely foolish, I unleashed a sheepish “Giufa” grin, and said, “Thank you.” 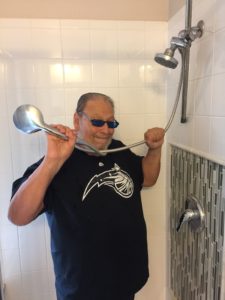 Snakes in Sicily, I wondered.  Was I trapped in a jungle of metal snakes? Now, as I stepped into my upscale Sicilian resort shower, I wrapped my hands around the flexible shower head and initiated my cleanse. A  splashing snake like silhouette tracked me down. This obstinate shower refused to have any part of me or my unholy baptism, acting in much the same way as an irritated baby scratches and scrambles to avoid momma’s cod liver oil. This sassy and wrinkled sprayer never intended to cooperate. It stubbornly followed its own commands.

After inadvertently biting down on my lip, I  clamped my hand on the shower snake head with more intensity.  Its wild rhythm forced me to choke hold it.  It twisted, turned, and spun more effectively than a spinning top. I played the warrior part well and refused to grant freedom to this impatient shower head. Somehow, it squirmed, slipping out of my hand and  broke free and began Disco dancing on the bathroom tiles, splattering its waters in every nook of the room.

It spat and splashed upon the walls, the floor, my face, finally settling on a corner landing spot of the bathroom floor.

Seemingly angered, it increased its invasive water attack surge. As a child, I never mastered the skill of jumping rope. When the rogue shower head went totally wild, and I looked at my feisty feet, I felt assured that I could have jumped rope better than any city child or middleweight boxer.

I finally strangled the faucet and slowed the flow.  The tiles became the bed of a tiny lake. Soap bars surrounded and floated like children’s boats in tiny pools. Surprised, I then slid across the bathroom floor like an out of control first time skater on an ice hockey rink.

Finally, after my turning and twisting all sorts of controls, the floodgates totally shut down. I scrambled to throw on my robe. That defied me too. The sleeves were inside out. That clothing glitch corrected, I called the hotel’s main desk.  The clerk on duty scurried in. When he stood in the middle of the possessed shower snake’s damage, and felt the mini-sized raging river massaging his toes, he covered his mouth with his two hands and immediately offered new accommodations. I declined.

The following sunrise, I saw my friend and fellow Sicilian traveler Tom. When I asked about his evening, he said, “Don’t ask. My shower head listened to its own drummer and acted like a crazed and angry snake.” I grinned broadly and said, “We have to talk.” So much for exclusive hotels sporting arrogant and independent minded showers.