Sicily Cut in Half 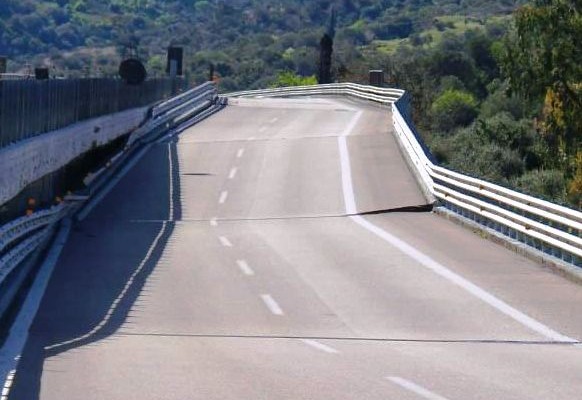 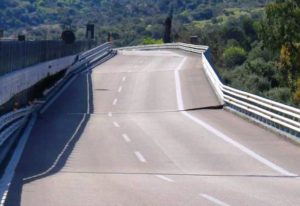 This island is one of the most beautiful in the Mediterranean, if you have already visited.  If you haven’t yet, you will find some of the best scenery, beaches, history, culture, good food and wine which few places offer up all in one go, as they do here.

On the surface all things seem wonderful but underneath they rarely are.

If you are on the point of visiting here for your summer holidays, you might be interested to know that, depending on which airport you arrive at – Catania or Palermo – and whatever your itinerary is, you may find yourselves taking a deviation from the Palermo/Catania motorway owing to the fact that part of the motorway was damaged by a huge landslide this Spring.

As with all things Sicilian, bureaucracy suffocates everything and there are too many people: engineers, associations, builders, pen-pushers and local authorities who all have a say in the matter. So, it doesn’t look like the motorway will be fixed any time soon.

Prepare yourselves for a scenic ride through the mountains to get from one side of the island to the other.

From Palermo going towards Catania when you get to the exit of Scillato (and from Catania to Palermo at the Tremonzelli exit), you will have to follow the signs off the motorway and start climbing into the mountains.

Remember, you are on holiday so all along the route, especially if you are stuck behind a bus or lorry, you can admire the majestic mountain scenery unfolding before your eyes.   If you are very attentive, and not actually driving the car, you will be able to look down towards the broken motorway and up over towards the opposite mountain where there is a vertical, sandy strip climbing up the hill. This is easily visible if you have just come off the motorway at Scillato. It will have some insect like vehicles surrounded by clouds of dust, struggling to get up it.   Conversely, there will be quite a few other ant-like vehicles skidding down it.   This is called “La Strada degli Incazzati”.   Which loosely translated into English means “The Road of the Pissed-Off”.

So why should it be “pissed-off”?   Well, the poor long-suffering villagers of the town of Caltavuturo, over the other side, were not happy when the motorway collapsed.   They already had had to endure a series of landslides and subsiding road surfaces on the outskirts of their town, which severely handicapped their movements to and from Palermo, without having to add on another two and half hours to cover a section of road that normally takes 20 minutes.

A group of angry (hence “pissed off”) business men from the community decided to take it into their own hands, and at their own expense, to restore an old cart track and make it viable for cars.   They had a couple of bulldozers in their back yard so they cut the road from top to bottom, Sicilian style, and told the population that they could now reach the open section of the motorway in 20 minutes instead of taking the two and a half hour deviation.   The only problem is that as there is no proper road surface and the hill is probably a 1 in 3 gradient, unless you are an experienced off-road rally driver, it is probably not advisable to take it.   Especially when you see all those skidding vehicles on it.   However, because time is money and people have appointments to respect, kids have to go to school, women give birth and need to get to hospital, you will find a good cross section of the public negotiating this piece of dirt track at their own risk, if you decide to try it.

I do not recommend it if you are in a hire car, and only if you want some extra thrills and want to see how Sicilians really do live their day-to-day lives.

Instead, let us get back to the scenic road that you are actually on.   Depending on how slow that bus/lorry is going in front of you, before long you will come to the village of Polizzi Generosa, home to Domenico Dolce of fashion stylists Dolce and Gabbana fame. By this time you may have had enough of breathing in the exhaust fumes of the bus/lorry in front of you and wish to stop here for a coffee or snack.   Wise decision. This town is well-known for a particular cake with a filling made out of the unlikely mixture of fresh unsalted cheese (Tuma), chocolate, cinnamon and sugar. The name of it is: Lo Sfoglio delle Madonie.   Madonie being the mountains you are travelling through.   I can assure you that the cake is delicious.

After enjoying a good coffee and a piece of Sfoglio you can continue your journey along the long, winding road, which will now descend towards that elusive motorway which is somewhere over on the other side.   The countryside changes on the way down with rolling fields of freshly harvested grain and signs to Petralia Sottana and Petralia Soprana. Two more enchanting villages worth visiting whilst you are here.

Depending on the next tractor/lorry/bus in front of you the whole journey could add on another two and half hours. But, again, remember you are on holiday and you do not have to do this road every day like the majority of people on it, trying to get from one place to another in the shortest time possible.   Take time to enjoy the views.   Stop and walk through Polizzi Generosa. You probably would never have come up here had the motorway been open.   Probably, you would not have even noticed it sitting on top of the mountain from the motorway.

Maybe only Polizzi Generosa is reaping some benefits from all this through traffic and the broken highway.   You, instead, can relax and enjoy your holiday – Sicilian style!