SICILY FOR SALE TO USA 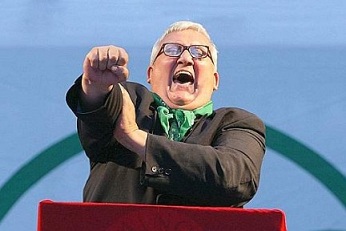 As if the Northern League (Lega Nord) had not already found itself embroiled in enough controversy, now comes the latest provocation by Italian politician Mario Borghezio, a League member. With derogatory comments, Borghezio perpetuates ongoing xenophobic and discriminatory offenses against southern Italy and Sicily bolstered by his political affiliation.

Previous allegations attributed to the Northern League include those against Umberto Bossi, the party’s founder and leader, who departed following accusations by prosecutors that taxpayers’ money earmarked for his party had been used to refurbish his house and to provide favors to members of his family. Such favors included the rental of a Porsche for his son Renzo.

Other major figures of the Northern League including Rosy Mauro, Calderoni, and Treasury Manager Francesco Belsito stand accused of allegations ranging from misusing public electoral refunds given by the government to the party, to engaging in fraudulent acts, to creating overseas black funds in Tanzania, even to being linked with Calabrian organized crime (the ‘Ndrangheta) all of which have further scandalized associated officials.

Now speaking out in the utmost hypocritical manner, Borghezio heightens ongoing controversy by boldly proclaiming that the Italian regions of Sicily and Campania should be sold to the United States to free Italy from the Mafia and to reduce Italian public debt. In so doing, Borghezio adheres to a passé stereotype of Sicily involving infiltration of the Mafia.  In reality, the Mafia is not embraced by Sicilians. Instead, it faces stiff opposition presented by the population.  Furthermore, it must be stated that the economy is not suffering because of the Mafia.  Rather, economic woes stem from an ongoing smear campaign that runs contrary to encouraging foreign investment in Sicily.

Per Borghezio’s comments made on KlausCondicio, “There’s no denying that the Mafia in Sicily and the Camorra in Campania are firmly rooted in the territory…So, a solution could be that Monti (President of the Council of Ministers) sells these areas to the United States or to a pool of US millionaires, or to Russia.  It seems like this could have been done immediately after World War II as the U.S. would have liked to have added a star to their flag. Gladly, Sicily could have been that star…”

His critical, harsh words continue. “Campania and Sicily are absolutely useless areas,” adds Borghezio, “…and I’d also put Sardinia on the market.” Borghezio’s reason? “With money supply being an issue, we could reduce Italian debt…”

In an interview published on February 7, 2006, on Corriere Della Sera, Borghezio said, “When I’m on stage at a political rally, I become a different person. I say whatever comes out of my gut. It’s exciting. No, it’s more than exciting: It’s like having an orgasm.”1