Celluloid Sicily often conforms to the stereotypical view of Hollywood. However legendary some of these films may be, they only tend to look in one direction. There is another cinematic world out there which paints a rich, evocative portrait of the island and its culture. These ten movies, in no particular order, represent diverse observations of Sicilian society as seen by both islanders and outsiders alike. They are set against stunning backdrops, from the backstreets of Palermo to the baked interior and the mythical Aeolian Islands – a film maker’s paradise. Choosing any list is an arbitrary exercise and the likes of Stromboli, Baarìa and Chaos, to name but a few, could easily be added.

A film director heads to the island for a break after a scandal erupts in Rome. Walking along the golden crescent of Cefalù beach, he meets a man who makes wedding videos. He is persuaded to help out with the impending nuptials of a local prince’s daughter. The noble in question lives in the fantastical Villa Palagonia, the appropriately named Villa of the Monsters, at the heart of Bagheria. The real Prince Gravina had this stone menagerie of hybrid creatures created back in the early 18th century, supposedly mocking the infidelities of his feckless wife. Inside the mansion there is a mirrored ballroom, once said to be complete with spiked chair seats hidden under the velvet cushions.

Starring the great Marcello Mastroianni, the story is set in the home of Sicilian Baroque, Ragusa Ibla. A Sicilian aristocrat decides he has had enough of his petulant wife after falling for his beautiful cousin. Taking things to the extreme, he plans to kill her in revenge for an affair he has orchestrated. The action develops against the backdrop of ornately balconied palazzi and the lavishly sculpted San Giorgio cathedral. Fans of Andrea Camilleri’s Inspector Montalbano will also recognize the locations from RAI’s television series.

The shooting in the title refers to cameras rather than firearms. A German fashion photographer has lost his energy and inspiration; unable to rest, he aimlessly drives the streets of his home town, nearly crashing his car in the process. After a shoot in Palermo, he decides to stay on for a few days. Haunted by the grim reaper, an interesting cameo from Dennis Hopper, he wanders the streets by Piazza Marina and the Quattro Canti. Meeting up with a young art restorer near the Palazzo Abatellis, he regains a sense of purpose and a zest for life. The story takes you from the dockside to the heights of Monte Pellegrino, the rocky outcrop towering over the city. It’s Goethe’s Faust for the 21st century.

Another film director returns to Sicily, reminiscing about Alfredo, the projectionist from his beloved Cinema Paradiso. The piazza shown throughout can be found in the town of Palazzo Adriano behind Palermo. The now famous summer evening harbour scene takes us back down to Cefalù, where the local fishing boats tie up by the cliff-side houses. The makeshift open-air cinema is cut short when a thunderous downpour drenches everyone, leaving Totò to come face to face with the love of his life. There are no outdoor projections in this little harbour today, but the bay is still one of Sicily’s classic picture-postcard settings with its romantically ageing architecture reflected in the quiet waters of the horseshoe cove.

In search of some peace and quiet to finalize his next movie, Nanni Moretti cruises around the Aeolian Islands off Sicily’s north coast. Troubled by an annoying skin complaint, he also visits doctor after doctor looking for a possible cure. He island-hops from Lipari to Panarea, from Stromboli to Salina. The volcanic landscapes are interspersed with lush greenery and the shifting blues of the Tyrrhenian Sea. This archipelago has also inspired two classics of Italian cinema, named after the isles themselves: Stromboli and Vulcano. Dear Diary starts in Rome and includes an iconic vespa ride around the city walls, accompanied by the pulsating sound track of Khaled’s Didi.

Malena, featuring Monica Bellucci, purports to be set in a sleepy village, yet segments were filmed in the towns of Syracuse and Noto. With her husband away at war, Malena is the subject of idle gossip. Meanwhile, Renato, her silent young admirer, learns what really lies at the root of her problems. Syracuse’s Piazza del Duomo makes an appearance with its unusual semi-circular shape. Reconstructed after the 1693 earthquake, it houses the town’s most prestigious architecture. If you find yourself at the Palazzo Municipale, look out for the lizard which gives the building its nickname. It was carved into the stone by the Spanish architect, Juan Vermejo.

This beautifully shot film tells the story of the Chilean poet Pablo Neruda who becomes a mentor and source of inspiration for the local postman wonderfully portrayed by Massimo Troisi in his last film. Originally located off the coast of Chile by the writer Antonio Skármeta, part of the film was transposed to the island of Salina, one of the Aeolians, by the Director, Michael Radford. The postman succumbs to Neruda’s wordplay and longs to improve his own poetry. Having fallen in love with Beatrice, he needs Pablo’s help more than ever. Head for the beach at Pollara, backed by honeycomb cliffs, and you can walk in the footsteps of the two protagonists. 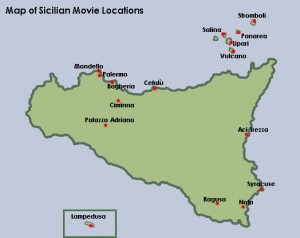 The classic tale of fishermen subjected to harsh treatment by greedy wholesalers. Luchino Visconti took Giovanni Verga’s story and used amateur actors from the Aci Trezza area. Although now a tourist destination, the small town does still have a fishing industry and a small museum dedicated to the movie itself. Look out to sea and you will spot the faraglioni, the three rocks apparently hurled by the Cyclops at a fleeing Odysseus.

Grazia lives on the island of Lampedusa with her three children and husband, Pietro. Bored and unfulfilled, her behaviour becomes increasingly bizarre. To avoid being sectioned, she hides in one of Lampedusa’s sea caves. The ending pays homage to the warm waters surrounding this southern islet, with a mystical, balletic underwater dance. Lampedusa is also home to a nature reserve inhabited by Caretta-Caretta turtles.

No listing of Sicilian films would be complete without The Leopard starring Burt Lancaster, Alain Delon and the Sicilian actress, Claudia Cardinale. It’s the retelling of Giuseppe Tomasi di Lampedusa’s only novel, the story of a fading aristocracy coming to terms with the brave new world of a unified Italy. The movie was filmed on location in settings such as Palermo, Mondello and Ciminna. Ciminna has a commanding view over the surrounding district and provided the ideal site for the Prince of Salina’s country estates. The searing heat of a Sicilian summer almost burns through the screen as the scorched landscape meets the cobalt blue of the southern sky. Bitter, disillusioned and resigned, the Prince of Salina is truly a figure from another era.