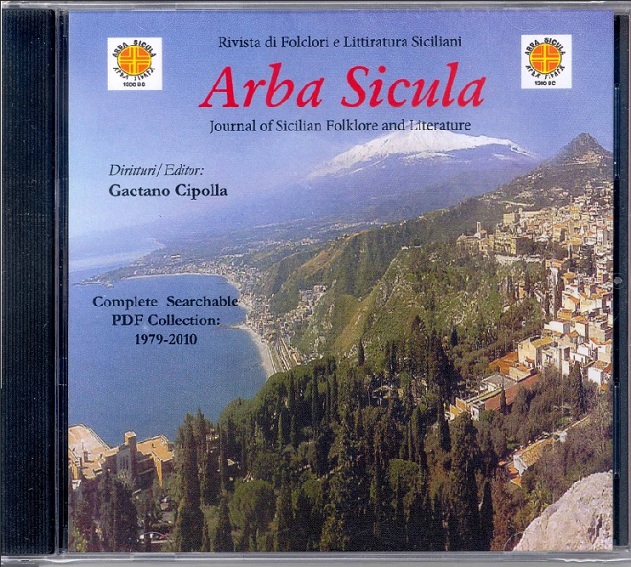 We met Professor Gaetano Cipolla in March 2011 at an Arba Sicula event on the campus of St. John’s University in Queens, New York. The event had been organized to present to the members a newly created CD containing all the volumes of the Arba Sicula journal produced from 1979 to 2010.

The large crowd seated at tables listened attentively as Professor Cipolla talked about the project and showed images of the first issue of the journal on a large screen, demonstrating how to navigate through the 33 volumes and explaining how to use the internal links that allowed readers to click on an item in the table of contents and jump directly to the appropriate page. As he navigated through some of the pages Prof. Cipolla commented on what appeared on the screen. At one point the screen displayed a poem written by Ignazio Buttitta entitled “Lingua e dialettu” and prof Cipolla proceeded to recite the first few lines more from memory than from reading it.

Put a people in chains, strip them naked, plug up their mouths, they are still free;
Take away their jobs, their passports, the tables where they eat, the beds where they sleep, they are still rich.
A people become poor and enslaved when they are robbed of their language, given them by their ancestors. They are lost forever.

This poem which appeared in the first volume of Arba Sicula is really like the national anthem of the organization, the professor said, it is the belief that has guided it for the last 31 years. You can take everything away from a people and they remain free. They become wretched and slavish when you take away the language given to them as a dowry by their ancestors. The goal that this organization has been pursuing since it began 31 years ago has been to save and to promote the language and the culture of Sicily. Culture cannot exist without language. The two are essentially inseparable and the death of one will result in the death of the other. That is what the poet Buttitta was crying about, professor Cipolla said.

The screen showed the crowd another page from volume one. A lot of white space on the page and a simple line in the center which declared:

“Nui nun semu né Ioni, né Dori, nuiautri semu siciliani.” (We are neither Ionians, nor Dorians, we are Sicilians)
Ermocrate, IV century BC

Professor Cipolla looked at the line and read it aloud. But as he read it the sentence loomed large and its significance became a focal point for spontaneous affirmation of what it means to be a Sicilian. He paused a moment and then said: “Ladies and Gentlemen, this is the birth of a nation, the dawning of the identity of a people. Hermocrates’ words were spoken at a moment when the Greek colonizers of Sicily realized they were no longer Ionians or Dorians, but Sicilians. This was a momentous awakening, akin to the moment Americans realized they were no longer British subjects, but Americans. And Sicilians have always known that they were Sicilians even though dozens of different civilizations, from the Greeks to the Arabs, from the Normans to the French, from the Spaniards to the Piedmontese, have succeeded one another as masters of the island. Sicilians have taken the best all of these people had to offer and always remained Sicilians.”

Prof Cipolla continued explaining the contents of the CD, highlighting some features and commenting on what the screen showed, but these two moments represent the two pillars on which the Arba Sicula organization stands: one, the belief that the language of Sicily—the organization insists on calling it a language and not a dialect—must be saved from extinction because the language is the container for the Sicilian culture, and the belief that Sicilians, whose three thousand years of history has set them apart from the inhabitants of the Italian peninsula, are Sicilian first and Italian later.

After all Sicily became part of Italy only in 1861, following Garibaldi’s conquest of the island. This is a common feeling especially among Sicilian immigrants to the US who came by the thousands at the end of the nineteenth century and the first part of the twentieth. Nearly one quarter of the Sicilian population arrived to the American shores speaking the only language they knew, Sicilian. But speaking that language for the millions of immigrants and their children was often a source of humiliation because if they spoke only Sicilian it meant they were illiterate. In Italy, schools teach Italian, not Sicilian. Speaking Sicilian meant you had no schooling as in fact was the case for a large percentage of the Sicilians who came to this country.

We asked professor Cipolla to address the stigma that is attached to speaking Sicilian. He answered that one of the main goals of his organization has been the removal of that stigma. “We have moved in two fronts on this matter: first we had to show that Sicilian is not corruption of Italian and that Sicilian was in fact, the first language worthy of poetry. Before Florentine became the literary language of Italy, Sicilian held that position for one hundred years. Dante said that for the first one hundred years Italian poetry was written in Sicilian, even by poets who were not Sicilian. Thus it is not true that Sicilian is a corruption of Italian. It is also not true that Sicilian is inferior to Italian. Like all so-called dialects, Sicilian is much more expressive and effective than Italian. Secondly we had to show that Sicilian has a vast written literature. I have translated many of the great poets of Sicily into English, poets like Antonio Veneziano, the greatest Renaissance poet who refused to write in Italian because he did not want to parrot somebody else’s language, Giovanni Meli, truly the most gifted poet who ever wrote in Sicilian, Nino Martoglio, the creator of Sicilian theatre, Domenico Tempio, whose reputation was harmed by his penchant for writing erotic poetry. These were world class figures in their time. But Sicilian was used also by Nobel Prize winner Luigi Pirandello, and today Andrea Camilleri who has dominated the best seller list for the last ten years writes in Italian with much Sicilian thrown into his prose in unpredictable ways. “

We asked the professor who recently retired from St. John’s University where he taught Italian language and literature, to reflect on the accomplishments of his unique organization. “We have fostered pride in being Sicilians,” he said without hesitation. “Sicilians are a proud people by nature. Indeed that is almost always the first thing they tell me when they meet me. I don’t know of any other Italians who volunteer that information. And I understand that they do it because deep inside they have been conditioned to think that being Sicilian is not such a good thing. Their pride in being Sicilian is an affirmation that preempts the stigma, that tells you ‘I know what people say, but I don’t believe it’. I think that Arba Sicula has given many Sicilians the tangible reasons for their pride. By sharing with them what Sicilians have done through the ages we have empowered them.

Sicily has been at the crossroads of the ancient and modern world. Although it is the largest island in the Mediterranean it is about one quarter the size of Cuba. Yet it occupies a much more conspicuous place in modern consciousness, perhaps because of the other stigma attached to Sicilians: the Mafia. That is another unfair characterization of Sicilians that we strongly oppose. In the final analysis Arba Sicula offers a truer picture of Sicilians than the one manufactured by the American media. Every year, Arba Sicula takes a group of about forty people on a 12 day tour of Sicily on the conviction that those who actually see the island and experience contact with the residents will develop an enduring love for the place. We have conducted the tour for 18 years in a row. What people realize after a few days on the tour that the beauties of the island have been a tightly held secret that few people know. Arba Sicula has been instrumental in shining a light on that secret.”