Skiing In Sicily (You heard me!) 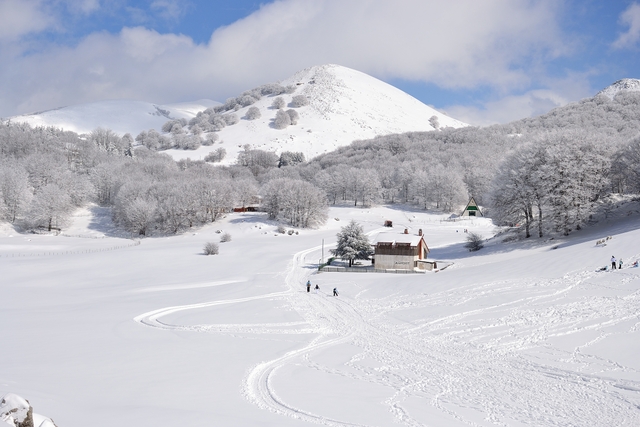 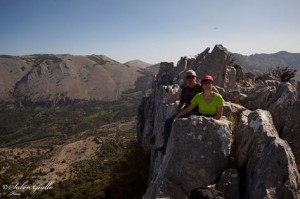 On a beautiful autumn afternoon I found myself hiking the Madonie Mountains, dead in the center of the Sicily. Travelers in Sicily often pass and marvel at this range on the autostrada that connects Palermo and Catania. I was part of a trekking trip with two chapters of Club Alpino Italiano, from hereon called simply CAI, an organization that welcomes residents and tourists alike to join in any or all of their year-long treks up mountains and through caves and even center-city historical walks—complete with good food, wine and music. In fact, to be honest, on the particular Sunday hike I speak of, we hiked four hours and ate six hours. La vita e’ cosi’ bella!

Yes, the chapters of Palermo and my Castellammare del golfo hiked about 5km up the majestic and magnificent peaks of Pizzo Colla, which if you check your map is a neighbor of Piano Battaglia. Breathtaking vistas galore from the mountaintops and stunning scenery from the “piano” complete with free-roaming cows.

The instigation of this particular weekend was to celebrate the 67th Anniversay of  the Rifugio G. Marini, which after a period of closure is now owned by the aforementioned CAI Palermo that has transformed it into a totally-modern, yet still rustic mountain getaway—-and ski resort! In fact it’s named after and dedicated to Giuliano Marini, a member of CAI Palermo who died during an alpine excursion on the Mont Blanc range in 1934.

I spent a lush, sunny and mildy-warm day there while visions of winters-past in Colorado and Utah danced through my head. Piano Battaglia is in fact also a ski resort. I saw the lifts! I saw the trails! I saw the apres-ski bar!! I want to go skiing….in Sicily! Did I mention the St. Bernard? 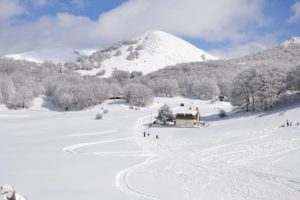 And the good news for skiers is that Piano Battaglia is just one of several ski options on the island. The volcanic Etna, as a big example, offers both a north and south side option. If you really want to add the ski option to your Sicilian vacation, there are several websites you can find. It goes without saying that the ski season here is generally short. Really probably at  most mid-December through February, but when conditions are right I have to think it would be a thing of beauty. Not that you need skiing to enjoy the mountain ranges of Sicily, they are stunning year-round. The Madonie and Nebrodi and Etna are always worth a trip. Plus, you’ll run into historical towns you may not othewrise ever see.

In full disclosure, though, I must mention even at these heights one can’t seem to escape the underworld. While scaling Pizzo Colla what do I pass in the middle of this vastness of nature? I see a memorial plaque to young man killed by the mafia in 1982. I don’t know anymore about this story, but it gave me enough pause to ask the same question Kay asked Michael in Godfather 3: “Why is such a beautiful country so violent?”

A question to mull over…or not…on your Sicilian ski vacation!

(Special thanks to Salvatore Giallo for  posting the photo of the couple sitting on the peak of Pizzo Colla.)