Standing up to the Mob in Sicily: The Case of Capo d’Orlando 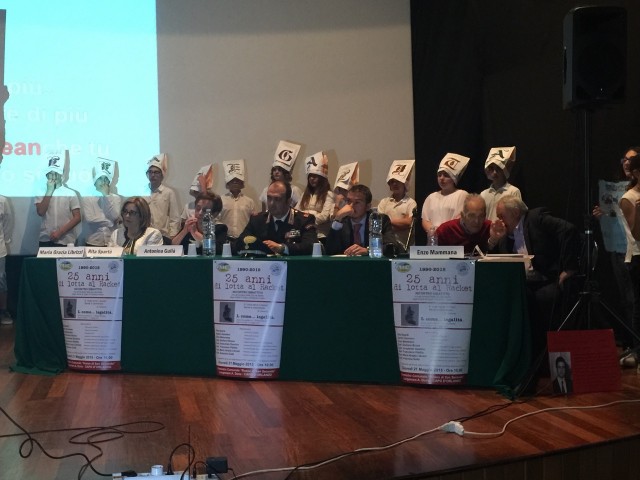 The merchants of Capo d’Orlando, a town of 13,000 inhabitants, made history in December 1990, when locals formed the first anti-racket association in Sicily. The Associazione dei commercianti e imprenditori orlandini (ACTO) successfully resisted mafia infiltration; yet, but for a small mention in The New York Times, and a slightly longer article in The Wall Street Journal, their efforts received almost no notice in the English-speaking press.

During a visit to my relatives in 1990, my mother and aunts noticed federal troops and military armed vehicles parked at the town’s borders. When they asked about it, our cousins said le scorte-armed escorts-were assigned to the businesss people who refused to pay the pizzo, the traditional mafia protection money.
Capo d’Orlando’s resistance preceded, by two years the tragic end of Italy’s two leading anti-mafia magistrates and symbols of the institutional struggle against organized crime-Giovanni Falcone and Paolo Borsellino. To further place Capo d’Orlando’s efforts into context, the Mani Pulite, or “Clean Hands,” a nationwide judicial investigation into political corruption, was taking place in the North around the same time in the 1990s.

Capo d’Orlando’s resistance to the mafia can only be understood within the framework of how the mafia operates. The main goal of a mafia leader is to gain control over a particular territory. Murders and kidnappings are essentially turf wars. Even though the mafia is an international operation, there are advantages to controlling territories close to home: they provide safe havens for mafia members on the run and, as long as economic conditions remain poor, they become prime recruitment grounds. Additionally, local businesses serve as fronts for money-laundering and a base from which to expand into other local territories.

Rackets, in the sense of the pizzo, is the principal instrument for controlling those territories. Although rackets represent a meager source of income compared, for instance, to drug trafficking and the illegal arms trade, mafia-imposed fees guarantee a regular cash flow that covers operational expenses: salaries, medical coverage, cars, and financial support to the families of imprisoned mafiosi. Collecting the pizzo also trains younger mafia members in how to establish and control economic activities in their territory.

Sicilian businesses have by and large surrendered to this system of intimidation and extortion: about 80 percent of businesses in Palermo alone pay the pizzo, representing more than 160 million euros, or $222 million a year.
During the Cold War, two antagonistic political blocs emerged in Italy: one was led by the Communist Party and the other by the ruling Christian Democratic Party. By the late 1940’s, Sicilian peasants organized through local associations, whose leaders were supported by the Italian Communist Party. The State’s response was anticommunist. By 1963, the Palermo chapter of the Communist Party calculated that, since the end of World War II, 27 union activists, Communists, and farm laborers had been killed in the province, plus 57 in other parts of western Sicily. The perpetrators were rarely apprehended and, if prosecuted, were absolved for lack of proof.

Capo d’Orlando-Capu d’Orlannu in Sicilian-is an attractive seaside town facing the Aeolian Islands, set in the province of Messina. A relatively new city, it came into existence in 1925. It is the birthplace of the poet Lucio Piccolo, cousin of Giuseppe Tomasi di Lampedusa, author of II Gattopardo. It is also home to a top-division basketball team, Orlandina Basket. And, most importantly to me, it is the birthplace of my mother and many other relatives.

Despite its small size, the city serves as the leading retail hub for the surrounding area. Its affluence is precisely what attracted the mafia’s cosche, or clans, from the Bontempo Scavo and Galati Giordano families. On May 4, 1990, Sarino Damiano, owner of the Hotel Tartaruga, was serving pranzo-the midday meal- to a hundred retirees, when strangers asked to speak with him. “We see that business is going well,” they said. “If you want to continue to do well, you’ll need to give us 30 million lire every month.” Damiano recognized them as members of a mafia family in Tortorici, a town nestled in the Nebrodi Mountains, and understood they were demanding the pizzo.

From that day on, his life became a nightmare. He confided what had happened to Tano Grasso, who would go on to help with the birth and development of 67 anti-racket associations throughout Italy, and would become the honorary chairman of the Italian Federation of Anti-racket Associations.

Mafiosi extortionists had paid visits to other merchants. After Francesco Signorino, the owner of a Renault car dealership, refused to pay the pizzo, his problems began. A car was stolen from his lot. Then two cars were set on fire. One night, the building where Signorino lived with his wife and children was riddled with bullets.
At the invitation of Padre Totino, a handful of Capo d’Orlando business owners met one evening in the sacristy of Chiesa di Cristo Re. Padre Totino persuaded angry citizens to forsake the roads of personal vendettas and violent retaliation, thus becoming a pivotal figure in the formation of ACIO. Together they vowed to collectively refuse to pay the pizzo and to denounce the extortionists.

While Totino was a key figure in ACIO’s formation, the institutional church pulled the plug on the priest’s efforts by transferring him out of Capo d’ Orlando in 1991, just as legal proceedings against the mafia were heating up. Members of ACIO implored church authorities, including the bishop, to rescind the order, but their pleas fell on deaf ears.
The founders of ACIO were painfully aware of the historical pattern: Individuals who publically denounced the mafia were progressively isolated and eventually assassinated, which is exactly what happened to Palermo businessman Libero Grassi. His saga unfolded during ACIO’s formative period.

In 1990, Grassi managed the Sigma clothing company, a firm with 100 employees and a revenue of 5 million US dollars. He refused to pay the pizzo, as most of Palermo’s business owners did. On January 10, 1991, after receiving death threats, he wrote an open letter to Giornale di Sicilia, denouncing the mafia’s demands and publicly refusing to pay. That day, he also reported the names of his would-be extortionists, resulting in five arrests. He received police protection and became a hero on national TV.

Rather than galvanizing support from other businesses, he was criticized and accused of tarnishing the image of Palermo. Within months, his factory was broken into and robbed, followed by an unsuccessful arson attack. On August 29, 1991, less than a year after he took his stand against the mafia, he was gunned down. No witnesses came forward.

In his book, Excellent Cadavers, Alexander Stille writes that Grassi’s assassination inspired ACIO’s members to cooperate with the police. They interpreted Grassi’s murder as an attempt to not just cow anti-mafia forces in Palermo, but throughout Sicily, including Capo d’Orlando. Rather than cave in to fear, Grassi’s murder hardened ACIO’s resolve. Besides fearing mafia retaliation, members of ACIO were equally afraid that the State; the police, army, and judiciary, wouldn’t be there in carne e ossa-in flesh and blood-to support and protect them.

Fortunately, only three days after ACIO formed, the police commissioner of Messina, Carlo Ciro Lo Mastro, paid a visit to ACIO, and worked closely with the organization, which added to ACIO’s prestige and credibility. By 1992, ACIO’s ranks grew to 150 members. In June of 1993, the Supreme Court confirmed the extortionists’ sentences, demonstrating that, when there is a will, justice in Italy can be dispensed in a reasonably brief time.

There were difficult moments. For years, ACIO’s members were subjected to intimidation. They lived with a police escort that protected them, even inside restaurants while they served clients. Some referred to these escorts as their angeli custodi guardian angels. But it proved to be their salvation because, to this day, no one in Capo d’Orlando has paid the pizzo.

Commentators have called the business owner’s resistance una rivoluzione borghese-a bourgeois revolution. Certainly, the supportive attitude businesspeople from Capo d’Orlando have towards ACIO stands in stark contrast with those who live in certain working-class neighborhoods in Palermo, who blame the anti-mafia movement in the name of ending mafia corruption-for destroying the construction industry, thus depriving them of badly needed jobs.

It has been argued that the anti-racket initiative in Capo d’Orlando didn’t inspire their colleagues in Palermo. The first anti-racket association in Palermo, Libero Futuro, was formed much later, in 2007. The reason why merchants managed to organize ACIO in Capo d’Orlando, it is reasoned, is that the city was never a part of the mafia’s traditional territory, and therefore, faced less pressure. The persons asking for the pizzo came from Tortorici, a neighboring town.

As former ACIO President Tano Grasso wrote in his book, Contro il racket, “ACIO’s experience wasn’t just about courage; it was above all, about intelligence. The men who brought the mafia extortionists to justice were uomini normali-normal men with their fears and their strengths. There were no indomitable heroes.”

The second lesson was the critical alignment of ACIO’s activities with State institutions: the mayor’s office, the police, the army, and the judiciary; the most critical lesson is that the mafia is not invincible, it can suffer significant defeats. Capo d’Orlando’s experience inspired new legislation to support victims of mafia extortion: In 1992, one law guaranteed victims compensation for material losses, plus loss of income; the second, passed in 1996, offers a five-year loan at zero interest to victims who collaborate with State institutions.

From Sant’ Agata Militello, Augusta in Catania, to Palazzolo Acreide, to San Vito dei Normanni in Puglia, other anti-mafia organizations have sprung up, inspired by the courageous shopkeepers and merchants of Capo d’Orlando. They decisively refuted the Sicilian writer Leonardo Sciascia’s notion that “Sicilians are utterly weak and utterly reckless. They don’t know balanced measures but live only in excess.”

Gil Fagiani is an independent scholar, translator, essayist, short story-writer, and poet. In 2011, he co-founded the Vito Marcantonio Forum. He co-curates the second Saturday monthly readings of the Italian American Writers Association at the Cornelia Street Cafe and the Sidewalk Cafe, and is the associate editor of Feile-Festa: A Literary Arts Journal. His latest poetry book, Stone Walls, was published by Bordighera Press. In 2014, he was the subject of a New York Times article by David Gonzalez, “A Poet Mines Memories of Drug Addiction.”