Sulphur, Sicilians, and the Exodus to the USA

There is not one manufacturing industry in the world that can work without sulphur. When the industrial revolution took place in the 19th century, 90% of all the sulphur in the world came from Sicily.

These are Sicilian sulphur miners: Why are they working naked? It was 40 degrees centigrade above ground and down in the mines it could get above 45 degrees, which (for you Americans) is 113 degrees fahrenheit. There was also 100% humidity and they were engaged in hard labour for up to twelve hours at a time. Sulphur gives off suffocating hydrogen sulphide gas which makes it hard to breathe and can cause skin lesions: it was once called brimstone and thought to be smoke from the fires of hell. The human body cannot survive these conditions with clothes on.

There were not only men down in the mines. Little boys would go to work with their fathers from the age of six. Children this young worked as miners in Sicily even after the second world war. 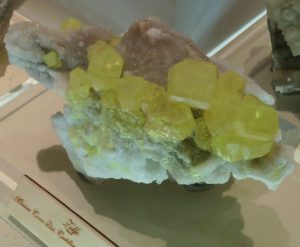 This precious mineral was so coveted by the British and the French that they almost came to war over which country would have all of Sicily’s precious reserves. Meanwhile the Sicilians worked for such low wages that, technically, they counted as slaves. They fuelled the industrial revolution of Northern Europe yet failed to partake in any of the profits at all.

I think a country in possession of a global monopoly, which fails to make any profits from it, can only be explained by extraordinarily bad government. 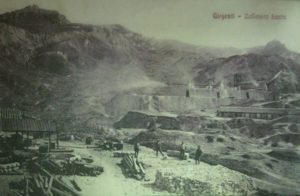 Sulphur causes a lung disease called silicosis. The Sicilians who started working under ground at the age of 6 died, on average, aged 40.

Sicily has vast sulphur deposits partly because it was once under the sea, and partly because it is a volcanic island fed with sulphur from deep within the earth. Some of the sulphur was taken out in rock form, but to extract the smaller traces as well, part of the mining process involved dissolving the sulphur into fluid. 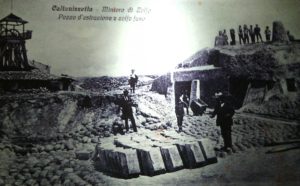 Above ground, it was re-set into the blocks in the photo on the right. These blocks were a dazzling yellow so I think, if this photo were in colour, they would look exactly like giant gold ingots.

When crude oil was extracted from deep under ground, the oil cracking process produced sulphur as a by-product. This was a far cheaper and safer way of obtaining sulphur, and so Sicily lost its global monopoly.

Thousands and thousands of sulphur miners and their families lost their livelihood. Like the Irish at the time of the potato blight, Sicilians moved to America in a mass exodus. 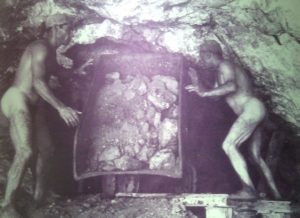 Today there are 5 million Sicilians living in Sicily, and 17 million “Sicilians” living in the USA.

Some of their descendants visit Sicily today and cannot understand why their grandparents left an island that looks like paradise. Yet I doubt if those first generation immigrants ever gave a second thought to the brimstone of hell they had left behind.

All of the images in this article came from a special exhibition on minerals and geology displaying the private collection of geologist Mario Tozzi. It was held at Villa Ramacca, a spectacular 18th century Sicilian villa. Their owner is hoping to find a place for a permanent museum.