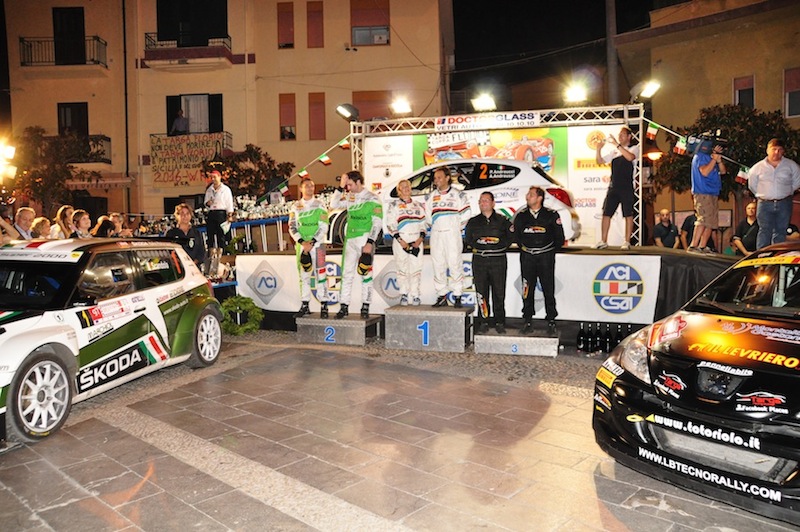 “Hugo, you’ve got to come settle an argument about the 1932 Targa Florio.”

—-from the movie, Grand Prix

Me and road racing, we got a thing going on. And so it was with great excitement that I headed to Campofelice di Roccella last weekend to see the 97th running of the Targa Florio, which, if you’re keeping score at home, is the oldest road race in the world.

We’re talking since 1906! My Sicilian friends find it amazing I went to the town at the foot of the Madonie Mountains to see a road race, since I’m rarely seen in a car, and to be honest, most of you reading this have forgotten more than I’ll ever know about cars or racing.

In fact, even another writer for Times of Sicily is more knowledgeable about Targa Florio than I am. Mia Walsh, of Baltimore, MD, and Cefalu, Sicily fame, recently wrote about the race in a piece called “The Legend of Targa Florio Continues.” For a quick summation of what is this thing Targa Florio I defer to what she wrote:

“The historic Targa Florio in Sicily, which begun in 1906, was a brain-child of Vincenzo Florio, a wealthy wine-maker born in Palermo.  An avid motorist, he engineered and financed the development of this endurance course through the majestic Madonie Mountain range.  Many of the world’s greatest drivers have driven this dangerous circuit, eventually shortened to 45 scenic miles through Sicilian villages like Campofelice, Cerda, Collesano and Caltavuturo.   These treacherous mountain roads and great changes in altitude made road conditions volatile and lead to protests from drivers not willing to risk an incident or death.”

( For her full article: www.timesofsicily.com/targa-florio )

The Targa Florio has been indirectly a part of my life since Lyndon Johnson was President of the United States. Or, more precisely, since the original release of the movie Grand Prix. I can’t tell you how many times I went to see this movie. Really, I can’t. I lost count.  An epic John Frankenheimer film, it was a breakthrough film for its time. The race scenes were and remain incredible. Frankenheimer put little cameras on the helmets of the Formula One drivers and on parts of the Formula One cars and we were in the car with the drivers as they raced. I realize all this seems lame to modern television viewers of F1 races where cameras on helmets is now the everyday norm, but in 1966 it was revolutionary. As were some of the directorial choices of split screens and crossfades that showed some races almost as if a ballet, being shown in ways that were almost kaleidoscopic in effect. And, not least of which, all of this was shown on an enormous curved screen. You sat in your seat in the movie theatre feeling for your own safety as the driver approached the next turn. I must have at one point confused the movie with reality because I actually did miss such a turn on my bicycle on a street in front of my home when simulating a Grand Prix race after ignoring a red flag by my older brother! He and my mother had to rush me to the emergency room where I’m not sure how many stiches were needed. And the film’s noise! It’s officially the only movie my father didn’t fall asleep during. He even slept through “The Guns of Navarone”!

The movie was also about the lives and loves of four drivers living and loving in some of the most beautiful spots in Europe, and for this I may have developed even decades ago a destiny to one day live in Europe. My younger brother is convinced he knew since way back then that I would one day do just that, and so for a housewarming gift for my Sicilian home he found an Italian version of the Grand Prix movie poster, which dominates the living area.

Well, in 1993 I was lucky to be invited to a hotel suite in downtown Denver for a Monaco-style view of the so-called Denver Grand Prix.  Even more lucky was I in 2003 to be sitting high on a hill to watch the legendary Monaco Grand Prix and I guess my luck hasn’t run out because in 2013 here I am, invited, with full Times of Sicily media credentials,  to Campofelice for Rally Targa Florio, a part of the Italian Rally Championship.

I think the last official Targa Florio as originally conceived was in 1973, when the race suffered a Grand Prix-movie like scene that killed at least one spectator.  Given the nature, and what one driver called the “insanity” of the course, it’s somewhat noted with pride that less than ten deaths, including some spectators, died in all the years of the race. I have to wonder though if there is a death count on dogs and cats who wake up on race day thinking its just another day in the beautiful Sicilian countryside and go for a walk in the streets only to be suddenly freaked out by a loud engine noise and the sight of a car headed toward them at breakneck speed. I actually witnessed what seemed to me to be a near miss between car and dog, but I certainly don’t blame the pets for going for a walk on the roadway. It’s really amazing scenery that the course takes and I’m now considering renting a car to take a leisurely drive on the course. I want to experience the turns and altitude of the course—at my own pace—as well as enjoy a Campari in every town along the way! (Did you notice every town on the course starts with the letter C? Thus, a Campari is the only way to go.) One driver this weekend called the race the “maximum expression” of road racing just because of the course itself. In fact, if you are a car builder and want to test your automobile, these roads are the roads to do it on. If you car can make it on the Targa Florio course, it can make it anywhere. 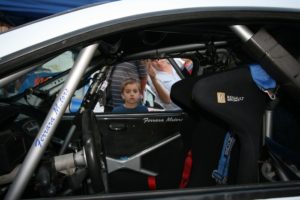 Campofelice was certainly “Little Monaco” this weekend and the town did a wonderful job both hosting the race and race fans. I personally must thank local resident and man about town Carmelo Dolce for offering me some lodging. Carmelo among other things, is the Comitato Sportivo dei Florio, and I was honored and happy to stay in his spacious home with its magnificent view of the sea all the way from Campofelice to Casteldaccia. (By the way, if you have a spacious home with a magnificent view in Sicily, all you are missing in life is a Maurice Jarre soundtrack.) Carmelo is also instrumental in an organization that promotes the area and you can check all this out at www.promomadonie.com

The whole town was festive with the noise of race car engines all around you and huge posters of historic Targa Florio moments in old Campfelice settings hanging from every street corner. It was fun to check out the tents where the leading drivers had their crews working away until the last moment. I especially checked out the car driven by one Toto’ Riolo from Cerda, Sicily , a town that is on the course.  For me, seeing him was like seeing a modern day Nino Barlini, although Toto’ seems a bit more modest. Oh wait, you’re probably wondering who Nino Barlini is.  Well, for starters he’s not a real person. Allow me….

One of the drivers in Grand Prix  is the full-of-himself Sicilian, Nino Barlini, played by Antonio Sabato, Sr. of Montelepre, Sicily. In one of his full-of-himself moments in the film, Barlini takes a microphone out of a journalist’s hand and starts boasting,  “I was born a poor boy in Cerda, Sicily. Nothing to eat, not a crumb of bread in the house. But every year I would see the cars come by because Cerda is right on the course of the great Targa Florio race.”

Things just got better in Campofelice as night came falling from the sky. It seemed the entire population made its way to the circular Piazza Garibaldi in centro storico to see the ceremonial start of the race. The real start would be at 8am Sunday morning, but on this Saturday evening the Piazza was packed with gelato-eating race fans to see the cars and the drivers up close. The drivers were interviewed on the starting platform and then they drove their race cars through downtown Campofelice. It was a evocative evening that I watched in its entirety on the steps of the church of Santa Rosalia. (Santa Rosalia seems to be following me wherever I go these days.) Many families representing three or four generations of Targa Florio fans packed the piazza until after midnight.

That’s the real story here, the cultural bond between this area and this race that, for all the trials and tribulations the race has gone through, the locals just refuse to let it die. It is only for this that I take the time to write about it because I was struck by how much this race means to the locals. Remember the origin of this race is well before LeMans and well before there was anything remotely similar to the Formula One circuit of today. Many here call Targa Florio the Formula One of Sicily and, in fact, one Sicilian I met feels this so strongly he’s convinced at one time it was a Formula One race. That’s what the race means to the people of the towns on the course. The connection between the people and this event is something you can actually feel when you are here.

If I may translate liberally from Madonie Live: Targa Florio is always Targa Florio, no matter its overall importance in the modern world of racing. The nostalgia will bring to life the past, even while new fans are leaning over balconies to applaud today’s winners. And not just locals, Carmelo Dolce made sure I knew the race has been given the UNESCO Intangible Cultural Heritage designation.