The Discovery of an Unknown 18th Century Sicilian Composer 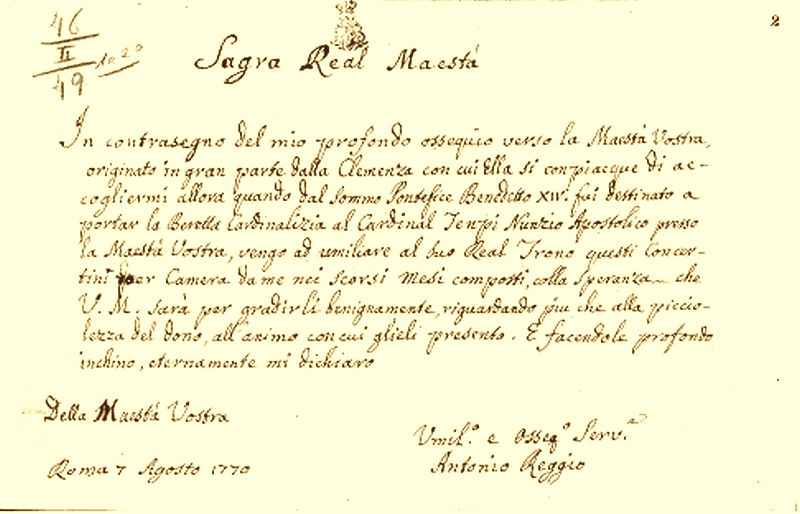 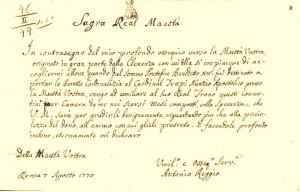 In libraries containing early music manuscripts there are many written by unknown composers. Many are mediocre amateur works but occasionally one surfaces which has potential. Unfortunately a great amount of work is required to research a person who is virtually unknown, but in doing so can reap rewards.

This is the case with an 18th Century Sicilian Composer, Antonino Reggio. Reggio was first mentioned by the English musician and writer, Dr Charles Burney during Burney’s tour of France and Italy. He describes a Monsignor Reggio who is a harpsichordist, violoncello player and composer for both instruments. He also describes his prowess as a person who was eminent in the skill of the science of sound.

A search of musicological sources revealed no references to a Monsignor Reggio. However, a chance reference was found to some works by an A. Reggio in the Santini Collection of manuscripts in the Diözesanbibliotek in Münster, Germany.

Although, at the time there was no positive identification to link him to Burney, the presence of the keyboard and ‘cello sonatas, composed about 1770 was considered more than a coincidence, Burney having met Reggio in 1770.

The link strengthened when a manuscript was discovered in the Biblioteca Nazionale di Firenze. This manuscript, originally owned by a 19th century bibliophile in Rome, was an exact copy of one of the manuscripts in the Santini Collection. The title page states that it was composed by a Monsignor Reggio. It was possible now to link the Münster manuscripts and to Burney’s Monsignor.

From the annotations on the manuscripts, which incidentally were marked originale, it was established that Reggio was connected to the Sicilian nobility.

Another breakthrough came when a copy of a printed libretto was discovered in the Biblioteca Centrale della Regione Siciliana in Palermo. This mentioned that Antonino Reggio was of the noble Reggio, Principe di Campofiorito in Sicily. Searches into family uncovered a baptismal record for an Antonino Reggio of the Nobel Family Reggio. This enabled the establishment of his date and place of birth.

The most surprising information which next came to hand was the discovery of a manuscript, once belonging to the King of Portugal, in the Biblioteca do Palacio Nacional da Ajuda, Lisbon. This was yet another copy of the manuscript found in Firenze this time it was addressed to the King of Portugal and dated 1770. The manuscript was accompanied by a handwritten dedication by Reggio where he gives clues to his association with Portugal during the 1750’s, a crucial stage in the history of the Jesuits relationships with the Vatican.

During the cataloguing of the Santini collection it had been noticed that the handwriting in a volume of the keyboard sonatas of Domenico Scarlatti, which had previously been unrecognised and a source of interest, was that of Antonino Reggio. This reopened the debate on the scribes of the Scarlatti Manuscripts.

In studying the manuscripts more closely some gems are beginning to appear in many of his compositions which have interested musicologists. This research, started some thirteen years ago and ongoing, is slowly bringing to light an important, forgotten, 18th Century Sicilian composer.

Monsignor Antonino Reggio was born in Aci Catena, a commune in the region of Catania in Sicily, in 1725 and died, possibly in Rome in the first quarter of the 1800’s. Unfortunately the date of his demise has yet to be established. He was a priest, later a Monsignor in Rome and a member of a cadet branch of the Sicilian noble family, the Principi di Campofiorito.

In 1753 Reggio was assigned to the Apostolic Nuncio in Portugal. His duties were as courier to the Nuncio. Reggio, who was based in Rome, was entrusted with the task of carrying back to Lisbon the cardinal’s ‘Beretta’ to Cardinal Tempi as a notification of his promotion. He possibly remained as courier to the new Nuncio, Fillipo Accioili, who returned to Rome in 1759 after being expelled due to his interference in the problems with the suppression of the Jesuits in Portugal. He was raised to the position of monsignor after Accioili’s appointment as cardinal. In 1763 Reggio relinquished his status of Abate with the monastery of Sant’Angelo di Brolo, a ‘benefici ecclesiastici’ in the region of Messina in Sicily.

Whilst in Rome he was visited several times by Dr Charles Burney who described him as ‘likewise a pretty good composer and performer on the harpsichord and violoncello’ and in a summing up of his visit he mentions Reggio again; ‘I am indebted for some curious compositions, and for the conversations of several persons in Rome, eminent for their skill in the art, and learning in the science of sound … (including) Monsignor Reggio’.

Reggio is also mentioned by the Roman poet and writer Giovanni Gherado De Rossi (1754 – 1827). De Rossi describes Reggio as ‘a man of great intellect, erudite, and very deep in music.’

The majority of Reggio’s original works are held in the Santini Collection in the Diözensanbibliothek, Münster. It is possible that Santini acquired Reggio’s library on Reggio’s death. These consist of sixteen manuscripts comprising some 180 individual works, which date between 1745 and 1774. No other work has yet been found which post dates the 1774 manuscript. Reggio would only have been forty nine and it seems strange that no more works have been found. His early works range from sacred works, such as masses, oratorios and sacred songs, to aria settings of texts by Metastasio. His later works, from about 1770, consist of sonatas for cembalo, works for two violoncelli and sonatas for lute and bass.

The sonatas for cembalo consist of two movements and appear, from the limited work carried out to date, to be of a style which was popular a decade or two earlier. The works for lute and bass (violoncello?) are interesting as the lute was going out of fashion at this time.

The majority of Reggio’s works, found to date, are in manuscript form. It does, however, appear that six of the keyboard sonata was published. In Breitkopf’s Thematic catalogue, published between 1762 and 1787, is listed: ‘VI Sonate di Antonio REGGIO, a Cembalo Solo. Amsterd’. This appears in the supplement dated 1772.

Recently he has been identified as the scribe of an important set of keyboard sonatas by Domenico Scarlatti in the Diözensanbibliothek, Münster. This opens up more speculations on the origins of the various manuscripts.

Anthony Harthttp://www.monsignor-reggio.com
Anthony Hart is a retired Management Consultant, Management Trainer and University lecturer. Born in the UK, he is married and now lives in Malta. As a member of the Società Italiana di Musicologia (SIdM) (Italian Musicological Society) he was invited to present papers at their Conferences in Bergamo (2008) and Rome (2009). As a member of the International Musicological Society (IMS) he was invited to present a paper at their Musical Iconography Study Group Conference in Barcelona in October 2010. He is also a member of The Royal Musical Association (UK). He studied lute under Diana Poulton and Chris Wilson. He holds a degree of Master of Science (MSc). He graduated from the Thames Valley University/ London College of Music as both Associate and Licentiate (ALCM) (LLCM) and is currently working on his dissertation for Fellow (FLCM). He has had papers published in Early Music, (An international Journal published by Oxford University Press), Fonti Musicali Italiane, (Annual Journal of the Sources of Italian Music) and Studi Musicali (Journal of the Accademia Santa Cecilia – Rome), He is currently working on the biography of the life, times and works Antonino Reggio and about to publish a Thematic Catalogue of his works.