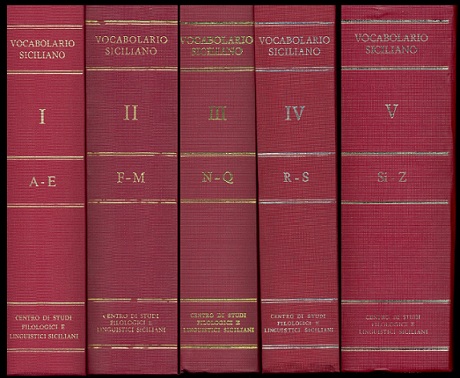 I was the ‘baby’ of nine children, the eldest of whom, like my parents, was born in Serradifalco, Sicily. My father died when I was a child. Two of my brothers had already married, but my mother Rosa Alessi Coniglio did her best to raise her remaining seven kids. If you had asked me as a child what language my mother spoke, I would have said ‘Italian’. Eventually I realized that the tongue she spoke, and that I learned (somewhat imperfectly), was the Sicilian Language.

My mother had been gone for forty years when my elder sister Mary (buon arma) was preparing to visit Sicily for the first time in 2004. I was concerned that due to lack of use, she had forgotten our parents’ tongue, and would not be able to converse with our cousins. Mary, ever the bold one, assured me she’d get by, and when she returned after a successful trip, she boasted “Everyone loved my Sicilian, and they said I spoke it very well.” It wasn’t until two years later, when I visited our ancestral village, that I fully understood the implications of that praise.

Contrary to some claims, Sicilian is a language, not a “dialect of the Italian language”. It has its own syntax, spelling and pronunciation. It does have many dialects, depending on the region of Sicily where it is spoken, but they are dialects of Sicilian, not Italian. And, unfortunately, Sicilian is not often written.

Sicilian was the first “Romance” language to develop from the Latin spoken by the clerics and administrators of the island. Based on the Latin Vulgate introduced into Sicily by Norman and Italian clergy, Sicilian was the language of the common man, but classical writers and poets “cut their teeth” on it, most famously in la Scuola poetica Siciliana, the Sicilian School of poetry, around 1200 AD, during the reign of Federicu Sicunnu (Frederick II). The Sicilian School affected writers like Dante, through whom the Tuscan language gained Sicilian influences (not the other way around!) The first known sonnet was created in Sicily.

The beautiful, melodious Italian language is more complex than Sicilian, and this has unfortunately led some to believe that Sicilian-speakers are less educated than those who speak Italian. Sicilian has no future tense, and to the Italian ear, the Sicilian way of expressing future actions sounds uncultured. “Tomorrow I will write to you” in Italian is Domani scriverò, but in Sicilian, it’s Dumani ti scrivu (Tomorrow I write you). It sounds unsophisticated, but it is perfectly understood by Sicilians to mean “Tomorrow I will write to you”!

When I finally visited Sicily in 2006, I was afraid that I wouldn’t be understood. My cousins, however, and the waiters, policemen and clerks I spoke to in Sicilian, did understand me. But they would look at me quizzically, and when I asked why, they would say “Tu parli la lingua antica” (You speak the old tongue). I realized that I was not only speaking Sicilian, but Sicilian as it was spoken in 1913, when my mother left for America. Then I knew why they had been so taken with Mary’s use of the language. To them, we were like time travelers, speaking words and phrases that had been out of use for decades.

But I also learned that the Sicilian language is no longer taught to Sicilian children! Italian is the official language. To me, this is a tragedy: that the language of my fathers is going the way of the dinosaurs. So I plan to use Sicilian at every opportunity, to at least keep it burning in the heart of one figghiu di Sicilia.