The Flashing Eyes of the Dancing Satyr 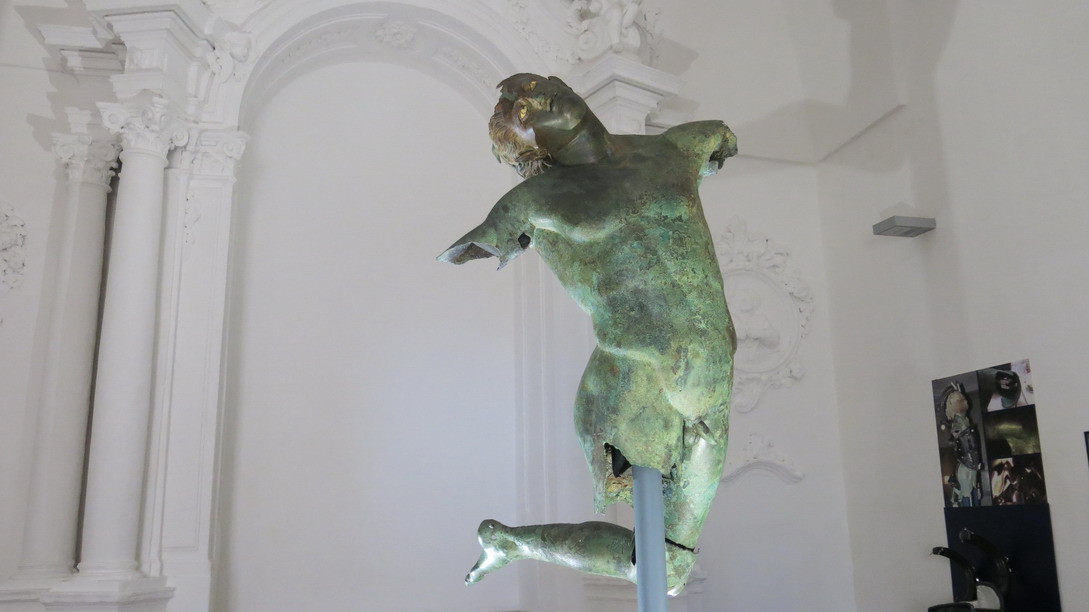 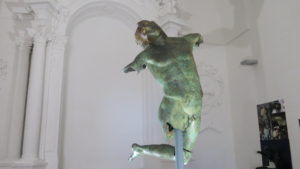 This happened the night between the 4th and 5th of March, 1998, when the crew of the Capitan Ciccio fishing boat from Mazara del Vallo, Sicily, made one of the most important recoveries of Ancient Greece art. During the night the fishing nets entagled a bronze statue that then was revealed to be the Dancing Satyr—which is considered the finest discovery in Italian waters since the Riace bronzes finding in 1972.

The presence of the bronze statue in the depths of the Mediterranean Sea, off the southwestern coast of Sicily, between the Sicilian island of Pantelleria and the continent of Africa, had been anticipated exactly one year before when the same crew of the Capitan Ciccio boat had discovered a bronze leg and brought it to the surface. The recovery was immediately reported to the Superintendent of Cultural Heritage that took in custody the precious relic.

The Superintendent, in cooperation with the Port Authorities and the Coast Guard, organized a research expedition using scanning sonars and other technical devices. Because of complications due to the depth of the sea in that area—almost 500 meters (1600 ft.)—and the lack of the necessary economic funds, research regretfully came to a premature end.

As a sign of fate, it was the Capitan Ciccio fishing boat that was to discover the statue and render it to the present generations. Here is what happened:
Francesco Adragna the owner of the ship tells us about how the crew was excited when they discovered the precious statue. “The statue was very heavy also due to the muddy sediments attached to it, so, to avoid ruining it while lifting it into the boat, we rinsed it with fresh water. After laying the statue on a bed of nets we remained there fascinated by those white alabaster eyes.” 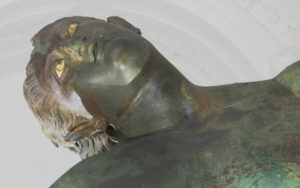 The Dancing Satyr of Mazara del Vallo is a Greek bronze statue that historians date back to the 4th century BC either as an original work of Praxiteles (Athens, 400/395 BC – 326 BC), one of the leading Greek sculptors of the time, or a faithful copy. Pliny the Elder in his Naturalis Historia, speaking of Praxiteles mentions the Satyr Periboetos in which the word periboetos could mean “famous” or “thou that yells excitedly”.

In Greek mythology Satyrs were creatures of the wild, part man and part beast that took part of the orgiastic cortège of Dionysus, the god of wine. Praxiteles represented these figures as young and handsome men with only small vestiges of animal parts. In this sculpture we notice the pointed ears and a hole in his lower back, where a tail was probably fixed. The Dancing Satyr is represented while performing a swirling orgiastic dance, notably flexed on his right side with his head thrown back as in delirium. The mouth slightly open reveals an evident state of ecstatic abandonment. 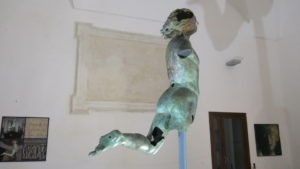 Although the Dancing Satyr is missing both arms, one leg and a probable tail, its head and dorso are well preserved, despite of the millennia spent on the sea bottom. After its recovery, the ancient statue was transported to Rome to the Central Institute of Restoration. A steel armature was set inside the bronze sculpture so that the statue could be displayed upright despite its fragility. After five years of work, the restored satyr was first displayed at the Chamber of Deputies, then brought back to Mazara del Vallo, where it is on permanent display in the Museo del Satiro in the church of Sant’Egidio.