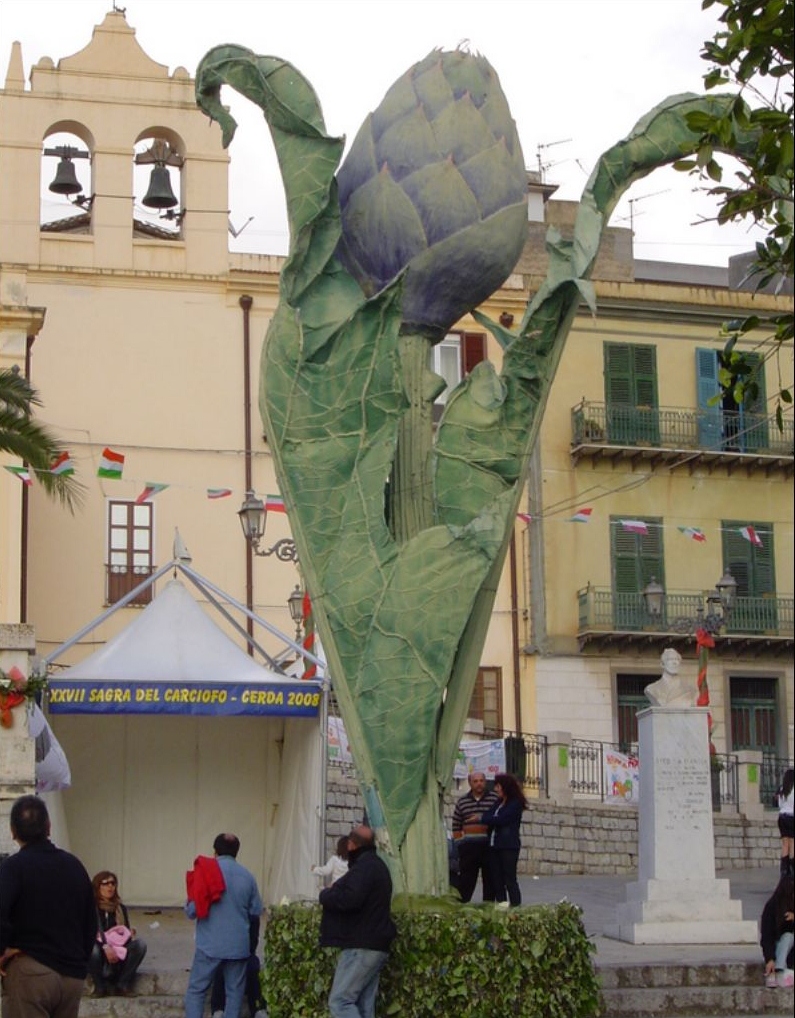 We know that in Australia there are a lot of ‘big things’ around the country in all sorts of unexpected places – the big lobster, the big banana, the big merino, the big bull etc. In Minnesota, USA they have some big roadside statues too. But did you know that Sicily has it’s own ‘big thing’?

In Cerda (pronounced Cherda), a small village, about 38km. from Sant’Ambrogio, there is a giant artichoke statue or cacuocciula as it’s known in Sicilian dialect.

Cerda is famous for its fields of artichokes and this is the season when we eat them. Artichokes have been around on this island since Roman times so Sicilians have had time to invent some of the most succulent, mouth watering recipes that you can possibly imagine. Right from a simple artichoke frittata to about a million different pasta recipes, stuffed artichokes, stewed artichokes, barbecued roasted artichokes and, of course, an artichoke gelato.

Some of us would say that the next best thing to buttered crumpets are barbecued artichokes. The tops are just cut off and then some parsley, garlic, salt and pepper and lashings of olive oil are drizzled in between the leaves. They are then put on top of burning charcoal to slowly cook until the hearts are soft.

If you like the sound of it and are around here over the 25th/26th April then you just have to go to Cerda’s Artichoke Fair where you can eat them to your heart’s content without parting with any money.
If, however, you would like to taste them in other dishes, then go to one of the many restaurants/trattorias. There’s no need to recommend any particular restaurant as they are mostly owned by the same family! And there you really will find an assortment of dishes to satisfy everyone’s palate.

Andrew Zimmern from the Bizarre Food series was also here so watch a short cut of the programme on Cerda and whet your appetite.