The spectacular island of Sicily is viewed by many as a legendary land full of mystery and enchantment. This vision is perfectly represented by the ‘Riviera dei Ciclopi’, or Riviera of the Cyclops, which is a stretch of coastline north of Catania leading from Aci Castello to Acireale. This is such a beautiful part of Sicily and is surrounded by myth and legend. Two of the most popular stories from this area tell of the Cyclops ‘Polifemo’, the one-eyed giant, who was the son of Poseidon (the god of the sea) and Thoosa (a sea nymph).

The first legend comes from Homer’s book ‘Odyssey’ and tells how Ulysses, the King of Ithaca, lands on the island of Sicily with twelve of his men on his way home from the Trojan War. He ventures into the Cyclop’s cave, who then traps the men and eats four of them. In order to escape, Ulysses blinds Polifemo as he sleeps by driving a burning hot stake into his eye. When the Cyclops awakes, he removes the large boulder from the cave’s entrance in order to let his sheep out, thus giving Ulysses and his men a chance to escape. As the men escape on their ships, Polifemo tries to stop them by throwing enormous rocks into the sea after them. These rocks can still be seen along the coastline and are known as ‘i Faraglioni di Aci Trezza’.

The other legend is much more romantic and tells the mythological story of the beautiful nymph Galatea who was the daughter of the sea god ‘Nereo’, and a young shepherd named Aci. Galatea and Aci were madly in love, however Aci unfortunately had a rival for his lover’s affections in the form of the Cyclops Polifemo. One day, Polifemo was so overcome with jealousy that he crushed Aci under an emormous boulder. Jupiter, the king of the gods, took pity on the young couple and turned Aci’s blood into a river and the nymph Galatea into sea foam, so that as the river met with the Ionian Sea, the lovers would be united in an eternal embrace.

There are now nine towns that lie in this river’s path and all take their name from Aci. My favourite of these are Aci Trezza with its wonderful seafood restaurants, Acireale with its stunning Cathedral and Aci Castello with its breathtaking castle and sea views. This area also holds a special place in my heart as my wedding reception was held at a venue high on an Aci Trezza hill overlooking the Faraglioni.

Be sure to add these mystical places to your itinerary if you come to Sicily! 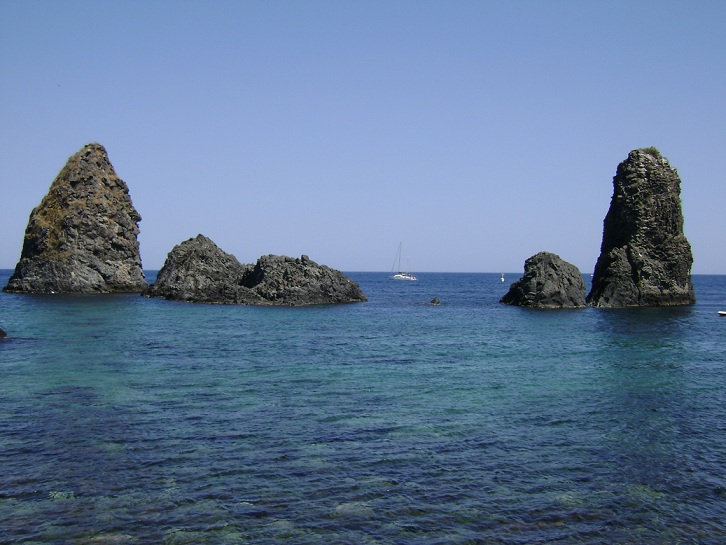