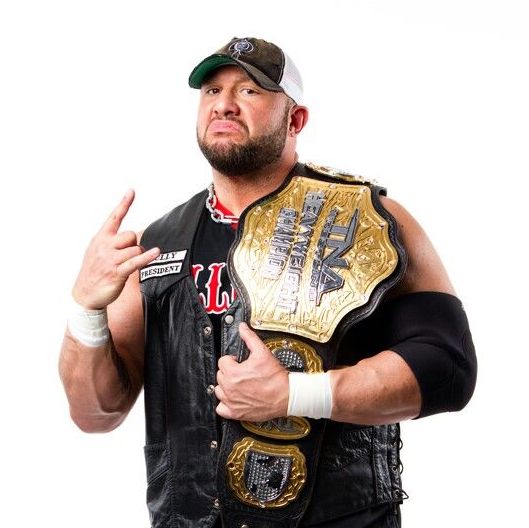 The young man strolled into my high school journalism office. I looked up and much like a total eclipse of the sun, the entire doorway appeared blanketed by muscle wearing a smile. Without an ounce of fat, he stood as tall as the average NBA basketball player and appeared as wide as any professional football team lineman. In fact, he reminded me of my dad’s favorite heavyweight boxing champion Primo Carnera. My dad loved to boast about the strength of that legendary Italian pugilist. From the moment I first saw the teenager, I wondered if Carnera were alive and young again, would this new student have outmuscled that legend?

He spoke softly, with humility, and courtesy. He seemed like a gentle giant. I asked him for his name. He said, “Mark Lo Monaco.” I pressed my lips and my mouth clamped shut. For a second, I sat in silence sporting a dumb stare. Finally, I reacted, “Are you joking? Please repeat your name.” My mouth opened slightly when the young man reiterated his last name of Lo Monaco.

I stammered, then said, “That’s my mom’s maiden name.” Immediately, I remembered something my son Pete said during his days as a basketball sports agent. While speaking to a Milanese attorney, they’d discussed a professional basketball player contracts. Somehow, and for some unknown reason, she asked Pete for his grandmother’s maiden name. He said, “Lo Monaco.” She yelped, “Wow! You won’t believe it. I too am a Lo Monaco. My family is from Sicily.”

My son said, “So was my grandmother.” The Italian barrister indicated that only a few Lo Monaco families inhabited the island, and suggested that they were probably all related. Before hanging up, she added ,”I can’t wait to call my mom in Sicily and tell her about our conversation.”

Mark pleasantly interrupted my reverie. “Cugino,” said Mark with a chuckle, “Are you daydreaming? “Yes indeed,” I answered. Then, I stood to shake his hand. As I reached out, he gave me a respectful bear hug, lifting my 200 pound frame a meter above the ground as easily as I picked up my neighbor’s miniature poodle. Restraining a smile that wanted to emerge, Mark said, “Mr. D’Alessandro, when other students are not around, may I call you cugino?” I nodded in approval.

Over the following few years, he humbly and privately edited articles for my school newspaper. In addition, my new Cugino Mark stopped by my office several times a week. His high school football exploits drew fans. He also earned honors in track and field as one of New York State’s top shot putters. Eager to introduce me to his family, he brought his vivacious younger sister Gina to meet me. She too was a scholarship type athlete, and as well-mannered as she was intelligent. In fact, after high school, she was invited to the United States Olympic Trials.

Mark’s parents were born in Italy, his mother Marie in Bari, and his father Antonino, in Villabate, Sicily. Proud of his father’s gourmet cooking Mark invited me to their family owned restaurant, the Villa Monaco on Long Island. I thanked him but also informed him that its outstanding reputation already directed me to dine there many times in the past.

We often spoke of the wisdom of Sicilian proverbs. Mark quoted Italian and American sayings from both his mother and his father. His dad warned him, “Never think you know too much.” His mother told him, “Knowledge is power.” Mark listened and successfully benefitted from these differing shades of advice.

On Lo Monaco’s last day of high school, he visited my journalism office to bid me farewell. Moodiness occupied his usually jovial face. A regular raconteur of humorous and uplifting stories, he wore a long faced look. That face was out of character. I asked, “What college are you attending this fall?”

“I ‘m not,” he said. “What? One of the top track stars in the state, certainly well-equipped for the university intellectually, yet he’d failed to apply to any college. He just bowed his head and began walking away from me. The young Lo Monaco never blamed school counselors, or teachers, for his failure to enroll in college. Instead, he took full responsibility and said, “It was my fault.”

I said, “Let me make some calls. Meet me here in my office tomorrow morning.”

I drove home and telephoned St. John’s University’s legendary basketball coach, Lou Carnesecca. At that time, he was mid-career and busy building his future Hall of Fame coaching credentials. Carnesecca advised my son Pete at that university. In fact, throughout Pete’s university years, he served as my son’s mentor and second father. He learned priceless lessons from that sagacious former Latin scholar.

I explained Mark’s situation to Coach over the telephone. “I said, “I’m not interested in the boy’s involvement in sports. I just want to him to earn a college degree. He’s an extremely intelligent young man and I’d love to see him studying at a university.” Coach, as he is affectionately called, agreed to meet with us.

The next day, I had difficulty getting Mark into the BMW I’d borrowed from my daughter to drive him to the college. So lengthy, the boy’s head would not fit in the vehicle. Finally, we opened the sunroof and drove to the college with Mark’s head out in the open air. His hair blew like a lighthouse flag during a typhoon.

Seeing Mark for the first time, the Coach’s eyes opened as wide as a child’s when first sighting Disney’s Castle. Mark stood as tall as most of the Coach’s college basketball players. In addition, he appeared as if he’d just stepped out of a muscle building magazine.

Slightly concerned that Coach might be thinking that I was requesting track or football team placement for Mark, I repeated parts of our phone chat. ” I’m not interested in Mark’s athletics. I hope he can concentrate on a college degree.” This perceptive coach totally understood and made a few phone calls.

Mark was directed to meet with admission authorities. He was interviewed and tested to see if he was college material. Obviously, the university authorities appeared impressed by the examination results. Despite his late application, Lo Monaco’s successful exam results combined with support from a coach noted for brilliance and integrity, Mark was accepted for university studies.

My two eldest children saw Mark all around the campus. After his college entry, I rarely saw him. Two years later, he visited his old high school, strolled into my office and said, “Can we speak privately?” I shut the door with a slight tremble, worried that he’d flunked out of university. He spoke of his successful studies, however, an opportunity recently crossed his life path that he couldn’t pass up. “Mr. D.,” he said, “I’m going to become a professional wrestler.” He read my disappointment as my drooping head suddenly focused on the floor. Mark tried to assure me that he’d be okay. “A pro wrestler,” I moaned eyes now seeking distraction by scouring the snow laden sky outside.

After that day, I’d lost track of Mark. A millennium later, we reconnected. A Florida newspaper published a feature on him. The piece mentioned where he lived. He resided a short drive from my home. Fortunately, I found his number and called. My wife and I invited him to dinner. I said, “Adele, you must meet him. He is one of my all-time favorite students.” I shouted excitedly , “We’re going to dinner with Bubba Ray Dudley, actually Mark Lo Monaco. He will truly light up our dining room.”

Mark came to our home for my Celtic wife’s delizioso Italian dinner. There with my son Jon and grandkids present, he continued to prove his virtuosity as a raconteur. Our home filled with laughter. At one point my six year old grandson Petey asked, “Can you beat up my dad?”Mark is always courteous, gracious and family oriented. He gently lifted six year-old Petey and said, “No one can beat up your dad.” We all turned from the boy sporting a collection of raised brows. Mark has always proved truly sensitive, despite the celluloid or newspaper tales. 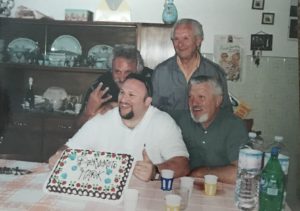 That evening, I totally realized his love for Sicily, family, and children. I’d seen him gently invite children up to the ring before matches. When he visited his ancestral home in Villabate, he mentioned his delight when parade of children climbed tiny hills to meet him.

Years later, we met at Mark Lo Monaco’s favorite Florida restaurant. I mentioned that I had grown up as a fan of the great Antonino Rocca, and nearly killed myself emulating Rocca’s drop kick on mom’s plastic covered couch. That’s when my mother agreed to cancel my piano lessons only if I’d quit targeting the couch as a dropkick prop. When I reached adulthood, Bruno Samartino became my favorite wrestler. Now, of course, my cugino easily replaced Samartino in terms of my favorite wrestler..

After looking at the $500 dining bill that the waiter handed me, I took out my credit card. Lo Monaco grabbed my hand. It felt as if a vice clamped my fingers. He commanded, “Put your card away. My business pays much more than the professor business.” Before we parted that night, he had to remind me. “Remember what you said when I told you I was quitting college?”

I smiled and answered, “Yes!” I’d said ,”Mark, college will offer you so many more opportunities to make money. Please, think it over.”

We looked at each other and his eyes seemed to beam as I stumbled to say, “I guess my advice isn’t always sound. So glad you defied me,” I said with an ear-to-ear smile, hearty laugh, and hefty hug.

His dream: To watch Inter play Milan at San Siro