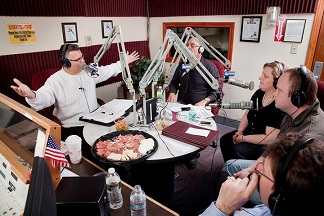 The Sicilian Show on WCCM Radio is online from 1:00 P.M TO 3:00 P.M. Eastern Standard Time. This translates to 19:00 to 21:00 Palermo Time. The two-hour show is not dedicated to inviting distinguished guests, it’s about supplying Sicilians with pertinent information, news, and occasional entertainment. On October 13 th, Dr. Giuseppe Sciano’, president of the FNS (Sicilian pro-independence) Party was a guest speaker on the show.

His presentation evolved into a virtual classroom. Dr. Sciano’ revealed the untold history of the Kingdom of Two Sicilies. Nunzio Di Marca also served as a translator. Host Frank C. Leone skillfully ensured that the program ran seamlessly. A pleasant musical pause featuring Italian music of the past was a bonus.

Many listeners found it so pleasurable that they commented on the speed at which the show seemed to move. The professionalism of the program’s two hosts delivered quite an informative and enjoyable two hours of enchantment.

Since Sicily is experiencing a period of dire economic stress, political and social issues dominated the discussion. To further complicate these matters, gubernatorial elections are scheduled at the end of October. The issue that is most frequently raised is the Sicilian’s dream of becoming a sovereign nation. Independence would allow Sicily to take advantage of its large and sought after agricultural sector along with its highly skilled work force.

Although the industrial sector, predominately the oil industry dominates the island’s GDP (Gross Domestic Product) or PIL (Prodotto Interno Lordo) for Italians, it has failed to generate the economic boost needed to economically uplift Sicily. Profits are detoured up to corporate headquarters.

Although this may assist in meeting Sicily’s tax obligations to Rome, the island is still forced to deliver an additional major portion to totally fulfill its tax responsibilities. Thus, the Sicilian economy is further distressed. Sicily is the nation’s largest supplier of fuel. Ironically, it pays the largest price for its fuel consumption. In conclusion, this production exposes an inconsistent and corrupt political structure dominated by political parties originating in the North. This further complicates the economic stability of the Sicilian people.

We invite you to listen to this program since it offers insightful information, entertainment, and provides a promotional outlet for Sicilians.

Tom is the administrator of the Sicilian Republic on Facebook at: http://www.Facebook.com/groups/sicilianfreedom