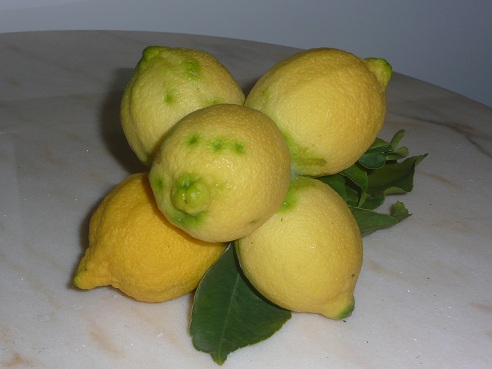 There’s a saying in Sicily that lemons are not real lemons unless they’re Sicilian.

There’s also another saying: ‘When fate hands us a lemon, let’s make lemonade’.  In the case of Sicilian lemons, let’s make Limoncello!  Difficult to make Limoncello in the UK.  The only alcohol to use is vodka whereas in Sicily pure alcohol is available in supermarkets.  My partner Natale’s sister Francesca makes the best Crema di Limoncello in the world.  I bring a few bottles back to England to keep in the freezer.  She has a secret recipe but the basis of it of course are the organic lemons which grow in her garden.

Lemons were brought by the Arabs to Sicily in the 10th century.  The land around Mount Etna, the Mediterranean climate, sunny hot days and cold nights, coupled with volcanic soil, gives the Sicilian lemon a typical sweetness and taste that is very difficult to find anywhere else in the world.

So now why do I see so many abandoned citrus groves on my travels around the Etna area?   The landowner’s grand houses – some with their own chapels – are empty and falling down or perhaps now restored and turned into restaurants and wedding venues.  Some of the surrounding groves looking neglected but there are still some thriving.

The lemons I buy in England all look the same which I suspect is something to do with the EU regulations.  The tree in the garden of our apartment in Sicily grows all sorts of shapes and sizes of lemon .  Some I would say are extremely ugly but the flavour is superb.

One beautiful sight while photographing near my home in Sicily was a mass of wisteria (il glicine) cascading from lemon trees in an abandoned grove.  The scent was amazing.  That picture I’ve had transferred onto canvas and given to friends and family. Now a little bit of Sicily is hanging on English walls.

Sicily is one of the main producers of lemon essence which is sent all over the world.  Scientists recently discovered a link between depression and our sense of smell and found the citrus fragrances – lemons in particular – directly affected neurotransmitters in  the brain.  The aromas help boost serotonin, a feel-good hormone, and reduce levels of norepinephrine, a stress hormone.  For a mood boost, add a drop of essential lemon oil to a handkerchief you can sniff throughout the day.

I studied aromatherapy some years ago and came to realise that scents (and also colours) can affect thoughts and feelings.  Walking through a lemon grove after it’s rained and seeing the fruit glistening and covered in rain drops is a real tonic – it would lift anyone’s spirits!

Lemons in cooking and for medicinal purposes – so many uses.  Too many to mention – it would take days.  By the way, my Sicilian partner Natale would never squeeze lemon juice onto fish – he says it destroys the flavour.

Long may the lemons grow and thrive in Sicily.  They are an integral part of the island’s landscape and culture.  Please don’t let the powers who be allow the chopping down of citrus groves to build apartments and villas and turn a beautiful area into an urban sprawl.

The groves must be productive of course and not discarded without thought.  Let’s hope the Sicilian younger generation appreciate their island’s heritage and that farming and fruit growing can be profitable with the right management.

Only time will tell.

Diana Wood
I'm English, born in Kent and lived and worked in London for many years. Now I have a home on that wonderful paradox of an island - Sicily. It's an extremely photogenic place and I never get tired of its beauty and surprises. I divide my time between living in a thatched cottage in Devon and an apartment by the sea in Roccalumera in the Province of Messina. The best of both worlds! I share my life now with my Sicilian partner Natale.