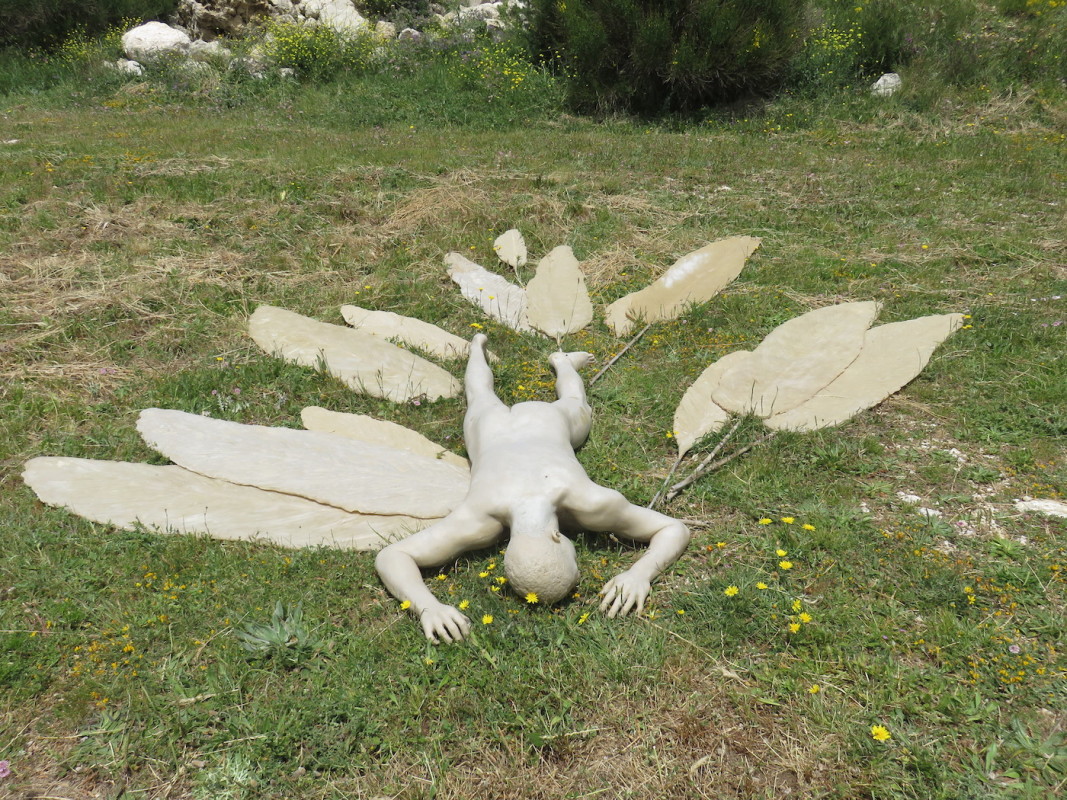 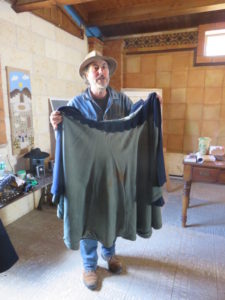 As we drove up – unannounced – Lorenzo Reina, the sculptor/shepherd from the Fattoria dell’Arte Rocca Reina, was getting ready to puff sulphur over his grapevines.   We were given a friendly welcome.   After a short time spent chatting about his life-long project of successfully combining his love of art with the running of a working farm, he told us to take our time looking around.   Then, in that ever hospitable Sicilian way, he invited us to join him and son Christian for lunch – “Whatever there is in the kitchen ……..” which always turns out to be a feast.

Lorenzo Reina owns 300 acres of land in the Sicani Mountains, 70 donkeys and 40 sheep all at 1,000 mts above sea level just outside the town of Santo Stefano di Quisquina (province of Agrigento).  But he is an artist too.   Known as the sculptor/shepherd, right from an early age while helping his father on the farm, he knew that he wanted to become a sculptor but not a shepherd.   As a boy he tended the sheep and passed his days and nights on the mountains together with the herds and a backpack full of chisels and other tools for working the white stone and pieces of wood he found there.  He studied the stars and nature that surrounded him. He was totally self-taught.   While his sheep wandered off into the neighbouring farm lands where he regularly had to go and look for them, Lorenzo was torn between duty to his father and his yearning to become a full time sculptor.

After holding an exhibition of his work in the town hall where everyone realized his talent, including his father, he was able to leave behind the life of the shepherd and dedicate himself to what he loved most.   That was…. until his father became seriously ill.

Being the only son in the family and realizing that the other part of his life was equally important to his artistic development, he promised his father he would carry on the family business.   Without doubts or regrets he adopted a ‘holistic’ ecological approach, viewing his art and nature around him as a single, inseparable entity and the source of his inspiration. 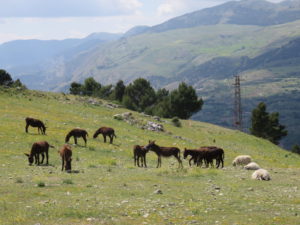 As you turn off the road leading from Santo Stefano di Quisquina to Castronovo di Sicilia, you are met by the bronze bust of Lorenzo’s father welcoming you to the Fattoria.   Lorenzo, when he is not chipping away at a piece of stone or building an open-air theatre on top of the hill, dedicates his time to his donkeys, sheep and agriculture.   With the donkeys he employs them in pet-therapy and also, on order, collects milk from them which is used as a substitute for breast milk due to its similar composition. From the sheep he makes cheese. Everything he plants is organic and travels not more than 500 mts. to the table. His Sangiovese vines, lentils, barley and a special ancient grain called ‘senatore capello’ all grow in the fields around.  The wine and bread he served us for lunch was excellent. He does not sell to the public.   However, when school groups arrive for special field trips, with the help of his sons, Christian and Libero, who run the catering service, he feeds the children with his home-grown produce. He has special educational programmes which include demonstrating traditional farming methods as well as the pet therapy courses.

Without a doubt the highlight of Rocca Reina is the spectacular open-air theatre built on the hill.   He says it’s the highest theatre in the world at just over 1,000 mts.   Lorenzo spent 30 years building it.   Stone by stone he built a protective dry stone wall surrounding it, blending totally into the mountainsi 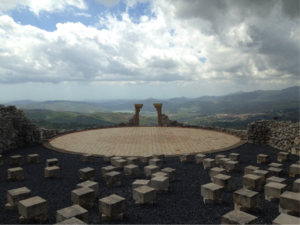 de.   As you push your way through the heavy iron door called Night and Day into the cavea of the theatre, the view from the precipice of the stage backdrop is breathtaking.   You almost feel in another world.   It’s called Teatro Andromeda and the seating arrangement at first glance seems to be totally random but in actual fact every seat corresponds to different points in the constellation of Andromeda.

Lorenzo says that he read somewhere that the constellation of Andromeda is travelling at 500 thousand kms. a second towards our Milky Way so that in some very distant future it will be the inevitable conclusion of everything that ever existed when we finally melt together on collision.

Every summer, by arrangement, concerts, shows and book readings are held in this sublime setting. 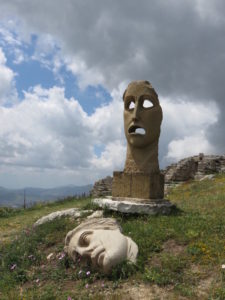 Leading up to the theatre entrance are other sculptures.   ‘La Maschera della Parola’ (The Mask of the Word) with hollow eyes and mouth.   During the summer solstice the sun actually shines through the mouth for 5 minutes. On the ground is the enigmatic face of Genius loci who, in classical Roman religion, represented the protective spirit of a place. A little further, another young artist, Giuseppe Agnello, has cast the body of Icarus lying face down with his wax feathers scattered around him.   After flying too near to the sun they melted, according to the mythological story.

Near the outbuildings is an arabesque bell tower. On it is a plaque with a dedication: This bell tolls for Khaled Al-Asaad, Custodian and Martyr of Palmyra.   Khaled Al-Asaad was murdered by ISIS in 2015.

There is also a museum which Lorenzo hopes will be open this year and will contain all his portable works of art.   He is also building a covered theatre so performances can be held during the winter.

Other exhibitions of his have been at the Biennale di Venezia and Expo Milan last year.

Lorenzo Reina is the essence of the Monti Sicani mountains and his is a poetic world with very strong Sicilian roots. He is totally immersed in this seemingly idyllic existence of bucolic landscapes and artistic expression.   A trip up here is both refreshing and enlightening. If you want to meet him or organize an event, phone or write to him first.  E-mail: fattoriadellarte@gmail.com Tel: +39 328 7671914.