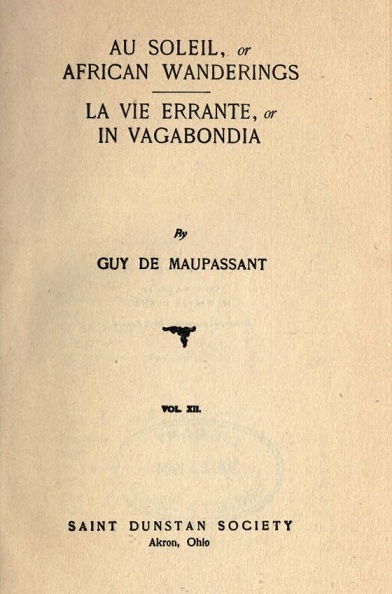 Born Henri René Albert Guy de Maupassant, this famous writer from the North Sea coast of France, first visited Sicily in the 1880s. This decade, which was to mark a notable period of travel and dedicated work for the author, started with the publication of Boule de Suif – the story of a prostitute and a carriage full of French residents fleeing their native town in the face of Prussian invasion. The moral dilemmas they faced examine French society of the time.

Maupassant’s eye for social observation extended to his travels and he began to set his impressions down on paper. His Sicilian memoirs were originally published in installments for the newspapers, Gil Blas and Le Figaro, subsequently appearing as part of the book, La vie errante, translated into English as The Wandering Life or In Vagabondia. Recently, his meanderings over the length and breadth of the island were retranslated and issued under the simple title: Sicily. 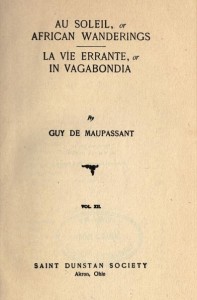 His tour takes in many of the expected sites: the Palatine Chapel, La Martorana, the mummified capuchins, Segesta, Agrigento and Taormina, but he detours to investigate the southern sulphur mines and the volcanic Aeolians. His shock at the conditions experienced by the youngsters in the mines is palpable: ‘They are small, thin, and yellow, with enormous and shining eyes…’ He juxtaposes this ‘inhuman method’ of mining with the natural spectacle he witnessed on Vulcano, an island he called the ‘flower of sulphur’.

He had to escape the attentions of a sleeping Englishman in order to climb the peak. It seems the man was a resident warden for the English manufacturer exploiting the island’s natural resources. Victorians even had their resource-hungry fingers stuck in the most dangerous of molten pies. Maupassant describes the jets of flame and steam he saw at the top, while a fumarole ‘pours the liquid sulphur, gilded by fire.’ Like a moth to a flame he was also drawn to Etna, Vulcan’s workshop as he remembers the Ancients used to call it. For a writer with an eye for the social nuance, he was not above spewing forth a list of volcanic facts and figures.

In the footsteps of Goethe, Brydone and so many other Grand Tourists, he made the obligatory ascent of the mountain. The altitude and gases took their toll as he approached the summit with his mouth masked against the fumes; his attitude of fear at the abyss below was soon to alter, however, when he turned his back to the mountain and faced outward, seeing the mist shrouded land fade to a clear sky and sea: ‘We were enveloped in the azure, we stood on an extraordinary mountain, that had come out of the clouds and was bathed in the sky …’

Maupassant’s itinerary gave him the time to burst a few stereotypical bubbles; not least of which was the danger inherent in travelling around the island. Sicily’s reputation for banditry had obviously been a topic of conversation amongst his friends prior to departure, and he notes that the locals seemed to enjoy winding up the foreigners with further tales of the infamous brigands lurking in the hills. This foreign naivety, a lack of street-wise confidence brings to mind Chevalley’s visit to Prince Fabrizio in The Leopard. After much experience on the road, Guy is happy to declare, ‘today travellers hesitate to land on this island, which is as quiet and as safe as Switzerland’.

The Frenchman came to admire, to contrast the sites with previous experience; his was not the dry comparison of a haughty ‘gentleman’, but the passionate response of a seeker of sensuality. Wandering the cloisters of Monreale, he muses on the austerity of French religious institutions which ‘cause a tightening of the heart, and sadden the soul’, instead he delights in the orientalism of the courtyard. For Guy, Sicily’s aesthetic pleasures were further enhanced by a trip to a museum in Syracuse where he encountered the Venus Landolina, a sculpture that heightened his poetic prose: ‘The hips, especially, were inexpressibly beautiful. The undulating line of the feminine back, which curves from the neck to the heels, unfolded itself with great charm, showing in the contour of the shoulders, in the decreasing roundness of the limbs, in the slight curve of the instep, all the modulations of human grace’.

Maupassant’s journey is a travelogue in the mode of its day, with facts and observations, some questionable, witness the remark that it was the island’s good fortune to have been invaded by ‘prolific nations’ – an architectural pursuit too far. Refreshingly though, for a man as solitary as Guy, it’s also much more, a visual, sensory experience written with a heart open to feelings and emotions. To travel, as so many did in this era, with part of your humanity neatly laced behind the corsets of Victorian dignity, seems to be a very methodical way of denying that vital element of new experience – sensation. Maupassant was happy to embrace Sicily in all its manifestations.

All the quotes in this review come from the 1903 translation of La vie errante, In Vagabondia, published by St Dunstans.