Times of Sicily Mag Hot off the Press 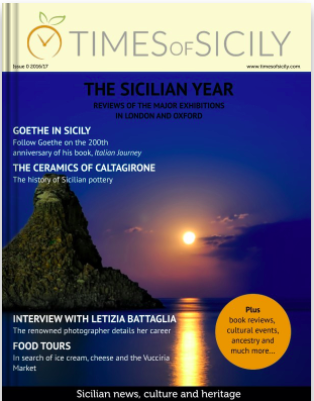 After 5 years of an increasing and continuing online presence, the Times of Sicily is now proud to say that it is launching its first paper magazine.  It is hoped that Edition 0 2016/17 will be the first of our annual releases, representing a variety of content, from the fields of art, ancestry, current affairs, events, gastronomy, literature, travel and much more.

All the text and images from the publication are original and have not appeared on the website previously.  In addition, for those who prefer to read on a tablet device or laptop, the magazine is also available as an eBook or pdf download. For purchasing details, see the relevant section here.  It just remains to let Giovanni introduce the magazine via his editorial column:

Firstly, let me say, you are the initial witnesses to a dream come true. I’m profoundly proud of this issue of the Times of Sicily Magazine, now produced on paper for the first time. Despite modern technology pushing publishers to digitise magazines, so they can be read on tablets and other smart devices, there is nothing better than having a real magazine where you can flip through the pages, leaving it on the coffee table ready to show your friends and family. I can’t wait to smell the paper as I’m writing this.

Times of Sicily brings 3000 years of history, culture, and tradition right to your home; with cultural and culinary articles, tourism, business and new trends from the land that was once the centre of the world and that one day wishes it could become so again. Sicily – a brand on its own, a land that should be a UNESCO World Heritage site in its entirety – is now promoted worldwide and brought to you through the Times of Sicily magazine.

I really believe, however, that, whether the content of the magazine is delivered to your doorstep or digitally downloaded to you smart device, computer or ipad, this is the work of an amazing team of contributors. For five years, in fact, genuine people, dedicated to writing, passionate about Sicily, have been supporting the magazine through the selective publication of quality articles, helping Times of Sicily in its primary goal: to serve as an impetus to the revitalization effort currently underway on the island. Without them, this would not have happened. I would also like to say a big thank you to Andy Edwards for his efforts as sub editor of the magazine.

To read the rest of the message and more… Buy the paper Magazine or read it on a tablet.
Share
Facebook
Twitter
Pinterest
WhatsApp
Previous articleThe Sicilians: Installment 3
Next articleGordon’s Alive: Pryse Lockhart in Sicily