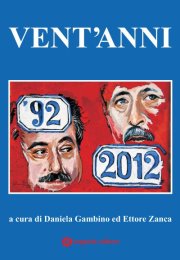 hurts and thinking about them does not mitigate their absence. We have tried to bring back and reflect upon in an appropriate manner, the memory of these two martyrs of the 1992 massacres. Just like reopening a wound and making  it heal  faster with more love, we feel with confidence that they would  like to have been remembered after fallen victim to the ills of the land as they still believed  in the institutional law  and in the State.

We have requested many friends to tell us something by diving in the recesses of their memories. The question presented to them has been simple yet difficult:  Tell me where you were when they killed Giovanni, Paolo and the others close to them because of their great love. It has been like causing a disturbance of something that inside of them has not yet found a place of peace.  Memories with a thirst for justice have surfaced, with the longing to deliver a more honest world, a moral legacy, or a new song.  Remembering that we still do not have a guilty party and those who should have paid, still have not adds to the pain. The accounts we have been given not only convey memories, but also, the heartache, outrage, lack of forgiveness and  the unwillingness to even dismiss the memory, of the witnesses cited in this book.

Twenty Years, was born trying to encourage  people talk to strangers and friends, and as a result, each one of them has brought his own personal contribution to this most beautiful mosaic.

Those who have voluntarily  participated to the book include:

Each one of them has given a valuable jewel, made of words, and they have shared it with us.  It is not by chance that they come from all over Italy, and not as owners, but only as messengers, delivering this to you.

Ettore Zancahttp://beneficiodinventario.blogspot.it.
Ettore Zanca was born in Palermo in 1971. He lives in Colleferro (Rome). He has a degree in law, is a writer, a blogger and on-line journalist. He writes editorials by the title "Fango e Stelle"(Mud and Stars) for the web Information Page - Informare per Resistere - (To inform is to resist) and writes for the on-line daily "La Valle dei Templi"(The Valley of the Temples). He has published by Coppola publishing house "Il pizzino della legalità" (The Note of Legality) and "Zupì e gli infedeli" ("Zu Pinu" and the infidels", the story of Don Pino Puglisi. Winner of the Il Convivio's literary prize, Giardini Naxos 2010, with the story "Il colore che non esiste" (The non Color) and winner of the contest "Fame di parole" (Words' hunger), 2012, for writings about dietary disorder, on the Societa` Italiana di Psiclogia, with "Meglio Essere Peter Parker" (It is better to be Peter Parker).